NOTE: starting May 4 2021, Tickets must be purchased ONLINE BEFORE getting in line for the entrance! …and the park is closed on Tuesdays instead of Mondays <<<NEW!

Manuel Antonio is the most popular National Park with Ticos. One reason for this is the unspoiled beaches that lie within easy walking distance of the entrance station. The overhanging palms are a refreshing break from the condos, bars, discos, hotels and restaurants surrounding the park. 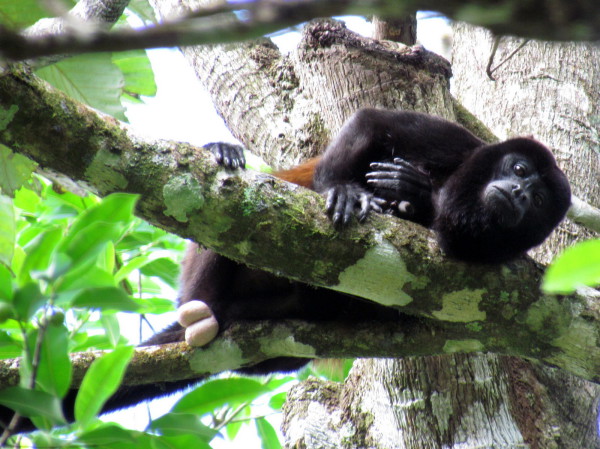 Logging and agriculture have left only two significant areas of tropical rainforest (tropical lowland wet forest) along the entire Pacific coast of Central America. Corcovado protects one on the Osa Peninsula, and Manuel Antonio protects the other. 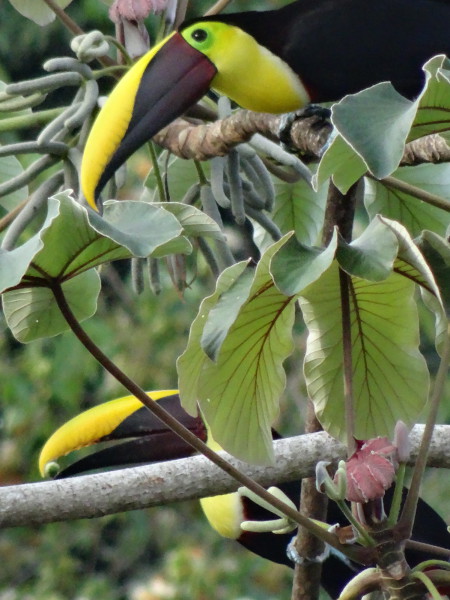 The dense vibrant forest is made up of guácimo colorado, madroño, cenízaro, bully, cedar, locust (including the endangered surá black locust), cow, and silk cotton trees strung with vines and lianas. Along the shore is a mix of manzanillo, beach almond (an import from the East Indies), copey, and coconut palms trees.  Near the entrance, a small area of mangroves boasts three species,  red, buttonwood, and white. 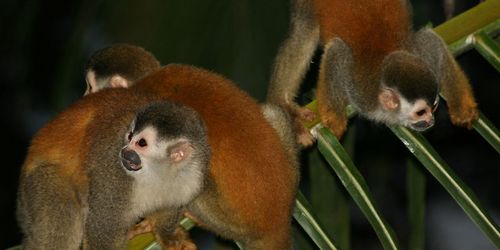 Red backed squirrel monkeys (mono tití) are a big attraction, surviving only in Corcovado, and Manuel Antonio. The park is actually too small to support a viable population, and  the monkeys travel to surrounding areas aided by  aerial bridges over the road sponsored by local school children. White-faced Capuchin (carablanca), spider (colorado) and mantled howler (congo)  monkeys commonly hang around the entrance station looking for handouts (it is illegal to feed wildlife). 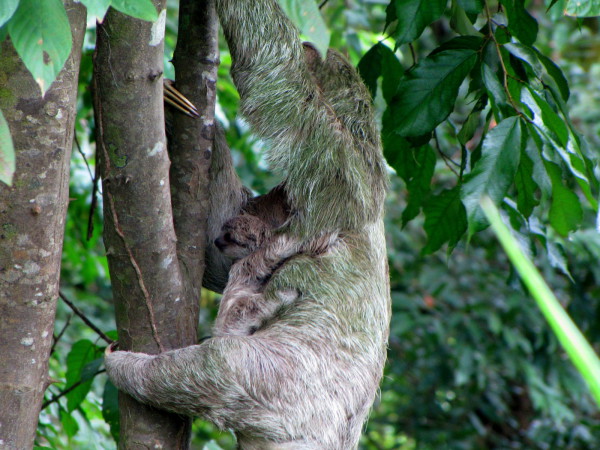 From the entry station where you wade the shallow Quebrada Camonera (small boats are available at high tide) the main trail skirts Playa Espadilla Sur to the park information office on Playa Manuel Antonio at the tómbolo (land bridge) of Punta Catedral where there are picnic tables and fresh water showers to rinse off the beach sand. From here you can access the 1.2 km loop around Punta Catedral that features a number of viewpoints and the pre-Columbian Quepoas turtle traps built in the rocks at the western end of Playa Manuel Antonio (only visible at low tide).

Continuing east from the information center the first turn on the left is the 1.3 km sendero perezoso (sloth trail) along an access road that  leads up, and out of the park to the hotel area above the parking lot.

A left turn at the next Y in the trail puts you on the sendero mirador (overlook trail) which climbs a further 1.3 km onto the headland behind Playa Puerto Escondido to an impressive overlook. Although the lookout point appears to be very close to the beach on the map, you cannot access the beach from the top of this nearly vertical drop-off. To reach Playa Puerto Escondido return to the Y and take the right hand branch.

No trails are necessary for some other interesting walks in the park. Along the beaches you’ll discover small tide pools in the rocks that hold dozens of species of sponges, corals, crabs and other crustaceans and more than a hundred different types of fish. Snorkeling is allowed for more extensive investigations, but you should be aware that any recent rainfall reduces the visibility significantly.

When to Visit – Closed Tuesdays

Note: Beginning in April 2021 the park will be closed on Tuesdays instead of Monday as it has been for decades.

Manuel Antonio National Park is open Wednesday through Monday year round (including weekends and holidays) from 7:00 a.m. until 3:00 p.m.

Tickets must be purchased ONLINE BEFORE getting in line for the entrance!

There are a LOT of hucksters and scammers hovering around the entrance and parking areas so make sure you’re dealing with the official offices.  Joining a tour group or hiring a private guide in advance is a good way to avoid the vultures (agencies have access to advance purchase to guarantee entry).

In late November 2018 the Ministry of health began enforcing the long standing (but generally ignored) limits on the number of visitors allowed in the park (600 weekdays, 800 on weekends).  Covid has introduced new quotas but since traveler numbers are so low they are generally not reached.

Occupancy quotas seemed may be ignored during peak travel times (Easter, Christmas and New Years) but in the past this has led to the complete shutdown of the National Park beaches due to unsafe water quality.

Note: High season (December 2018 through April 2019) was declared an “organizational disaster” by national news media with hundreds of tourists waiting in line for hours on a dusty sun baked road for someone to exit and give them a chance to enter the park. Changes have been promised for 2020.

Note: Dec 1, 2019 – Sistema Nacional de Áreas de Conservación – SINAC press release  – the park is prepared for the 2020 high season and the new $40,000 septic system is operational and should prevent contamination of the beaches with the fecal bacteria that have forced closures in the past.

The park receives approximately 151 inches (3,900 mm) of precipitation a year. January and February are the driest months; August through October are the rainiest. High temperatures average 81 °F (27 °C) to 86 °F (30 °C) year round.

The Central Pacific is driest from mid-December to about June but typically the rainy season isn’t as dramatic here as further south.

Click the image to go to the attachment page where you can choose either a large jpg version or the full resolution printable PDF map download of Manuel Antonio compliments of Costa Rica Guide and Toucan Maps Inc.

The park is extremely popular and can be quite crowded so having some local alternatives is a good idea.

Half an hour south is the birdwatching and wildlife mecca at Hacienda Barú National Wildlife refuge where you can stay in cabins a few minutes walk from the beach.  Five km south of there Dominical is a surf hangout with a laid-back backpacker scene.

North of Manuel Antonio are two of our favorite small less know natural areas.  Just 18 km from Quepos is the Rainmaker Biological Reserve with hanging bridges and waterfall swimming holes.  Up the coast another half hour is Punta Mala – Playa Hermosa National Wildlife Refuge protecting amazing wetlands and marine habitat.

Just a few km from Quepos there’s a little known southern sector of Manuel Antonio National Park that joins the Portalón Wildlife Refuge to preserve the mangrove forest, lagoons and wetlands of Estero Rey and the Ríos Naranjo and Savegre.  Further down the coast the refuge continues into the hills of Puertasol.

There are numerous agencies offering deep sea fishing excursions in the region. The competition seems to have driven the prices lower in Quepos than at the travel desk or in the lobby of the hotels near the entrance to Manuel Antonio.

Other activities available from your hotel desk or the tour kiosks in the area include day trips to Caño Island (snorkeling and scuba diving), white water rafting and kayaking (in the wet season only), surf kayaking, and canopy tours.

There is excellent mountain biking inland towards the mountaintop pueblo of Nápoles. Get someone (or hire a jeep taxi) to drive you up, then cruise down. We came in from San José by bicycle and only rode down this side, but can assure you that the ride up would be a tough one.

Manuel Antonio National Park was born from the desire of the people in the region to preserve their access to one of the most beautiful parts of Costa Rica. As David Rains Wallace describes it in The Quetzal and the Macaw, “Despite it’s relatively tiny size, it was still bursting with biodiversity in 1990. I’d rarely seen so much wildlife in a rainforest area. On a short trail leading from the beaches into the hills, three-toed sloths were visible every few hundred feet, draped like soiled scatter-rugs over cecropia trees. Troops of squirrel monkeys fed busily on swarms of green and black grasshoppers…”

The citizens of Quepos had enjoyed the area for generations until it passed into the hands of a series of developers. When one of them, Arthur Bergeron, began cutting trees and erecting gates on the road in preparation for constructing a private resort the locals reacted by requesting the Costa Rican Legislative Assembly to protect the area for all to enjoy.

Manuel Antonio National Park is named for a Conquistador who is buried there and was established in 1972 and expanded in 1980.

Weather—The park receives approximately 151 inches (3,900 mm) of precipitation a year. January and February are the driest months; August through October are the rainiest. High temperatures average 81 °F (27 °C) to 86 °F (30 °C) year round.
Size—1,685 acres (682 hectares, 2.6 square miles, twice the size of Central Park NYC, and 1/150th the size of Rocky Mountain National Park, Colorado)
Elevations—From sea level to about 160 feet (50 meters)
Established—Manuel Antonio National Park is named for a Conquistador who is buried there and was established in 1972 and expanded in 1980.
Habitats—Tropical lowland wet forest (rain forest), marine, beach. For more information on common mammals, birds, reptiles, and amphibians