La Cangreja National Park is only 20 miles from downtown San José as the crow flies but it’s as remote and wild as any of Costa Rica’s better known natural areas.  We didn’t realize how wild until we rounded a bend in the trail to catch a glimpse of a Puma disappearing around the corner ahead of us.

The park takes its name from cerro La Cangreja.  The Güetar (Huetar) indigenous peoples of the region have a legend that a giant crab (cangreja) blocked the pass between two mountains in the center of the park.  The chief fought the crab injuring it so it sought refuge in the rocks becoming the formation that looks like a crustacean with its claws blocking the trail.

Ecologically the park is associated with others like Carara, Baru, Mala and Manuel Antonio along the central Pacific but is unique in protecting the last tiny unlogged island of mid-elevation forest between the coastal lowland parks and the high elevation cloud forest at Los Quetzales, Chirripó and Savegre.

A couple of short trails and a mirador (scenic overlook) near the west entrance provide a great introduction to the park. However, the waterfalls and quebradas on the six kilometer  (3.7 mile) long Río Negro trail through the primary rain forest are the main attraction.  The trail starts out as a dirt road that drops steeply to the river.

A suspension bridge keeps your feet dry for the moment but there are many rock hopping and log balancing water crossings ahead. It’s a great place to take a break and watch the multitude of bird species flitting in and out of the sun dappled branches of the tropical hardwoods.

The ranger told us to look for a short (200 meters) side trail that follows the river to a giant rock wall which has eroded into pools at the bottom.  The current swirls like a natural jacuzzi but we skipped swimming thinking it would be the perfect spot to cool off before climbing the steep hill back to the car on our way back.  We never ended up trying the muscle soothing waters because it was raining when we returned.

From the river the trail climbs to the top of a ridge and then drops into the next valley with the Quebrada Cangreja at the bottom, then up and down to Quebrada Castellaña, again over the next ridge to Chires… Encanto… Camaron…

At each end of the main Río Negro trail it is clear and well maintained but near the middle where it gets less use there are some segments that would be impassable for many people.  It requires some athleticism and quite a bit of strength, skill and determination to negotiate the very steep mud slicked ravines where erosion has destroyed the trail.

Fortunately there’s a lot to see without necessarily hiking the entire length of the trail.

There are over a 160 resident species of birds in the park and it is also a stopover point for two different migratory routes.  Dozens more species can be spotted on their way north or south along the Pacific Coast flyway or headed east or west to and from the Caribbean side of the Talamanca mountains.

On our one morning hiking we saw dozens of birds, two snakes, many frogs and toads and of course the big kitty Surprisibus surprisipus (meep meep!). 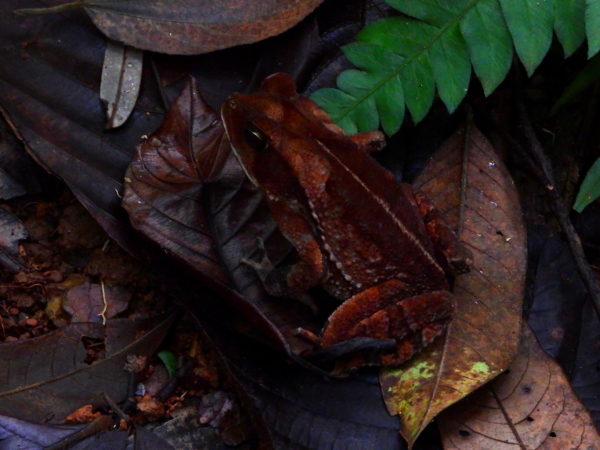 Two recently discovered tree species were named for the region Plinia puriscalensis after Puriscal canton and Ayenia mastatalensis in honor of the village of Mastatal on the park’s southern edge. New species sound like great news until you find out that they’re already almost extinct.  The populations inside the park are all that are left in the entire world.

Getting There – La Cangreja National Park

As noted above the park is only 20 miles from the capital and central valley in a straight line but the road is anything but straight.  The drive is 75 km and takes around two hours from San José (see route map on Waze).

Typically it’s not advisable to “stop along the way” in Costa Rica because a car full of stuff makes such an inviting target for theft but Cangreja is an exception.  Consider taking the scenic route from SJO airport to the Central Pacific stopping for a hike and swim under a tropical waterfall half way. 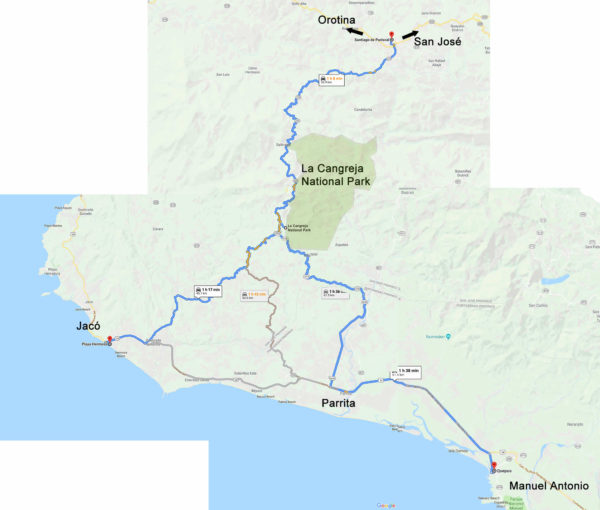 If you’re heading to Cangreja from the coast any of the three possible routes takes about two hours from Quepos/Manuel Antonio or Jacó/Hermosa.  Since the drives are roughly equivalent we recommend choosing one route on the way up and returning by another making a loop.  Use the eastern most route 609 in the valley along the Río Pirris as one leg since the other two options (route 239 and the unnumbered route furthest west along the Río Turrubaritos) are similar to each other and mainly in the mountains.

All roads to La Cangreja are dirt/gravel and none of them are exactly “good” but then again, none of them are that bad either. There are bridges over all of the rivers so you won’t need a snorkel to ford them and the roads are occasionally graded to eliminate the worst of the channeling and erosion.

Even in rainy season (we took two of the routes this July) it’s possible to get to the park in a standard 2WD car but expect some teeth rattling and pothole dodging to slow you down significantly compared to driving an SUV.

Let the driver know that you are going to La Cangreja National Park and they will drop you at the entrance about 1km above the park office.  If you ride the bus to its terminus in Santa Rosa it’s about a 4 km walk up the hill to the park entrance.

Back country camping (backpacking) is not permitted.  Fires are never allowed anywhere in the park. 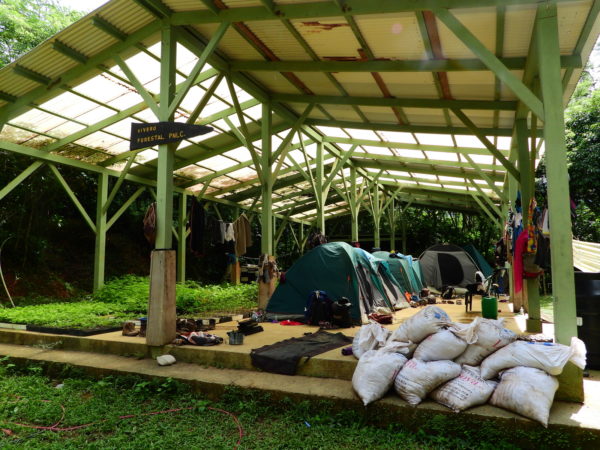 There’s no official zone for camping in La Cangreja but there are large grassy areas next to the office and when we visited recently there were tents set up in the plant nursery for a U.K. volunteer group.  There are showers and toilets available for visitors and a pulperia from Santa Rosa sends a mobile grocery store in a pickup truck if there’s sufficient demand. Please contact the park office for more information if you’d like to try to spend the night.

Nearby is Rancho Mastatal which offers a unique variety of rustic accommodations.

A large healthy rain forest creates its own weather.  The trees trap and take up water with their root systems then transpire it through their leaves pushing the humidity up and creating clouds and rainfall to start the cycle again.

Although La Cangreja is protected by conservation laws as a national park it is still under threat.  The park is surrounded by clear cut pastures and suffers from ecological isolation.  As the surrounding trees have been logged over the past 50 years the flow in the rivers inside the park has plummeted.  The Río Negro carries only one third as much water as it once did.