Rainmaker is one of our favorites and an undiscovered secret for trails through an old growth tropical rain forest filled with birds, amphibians and reptiles.  We’ve visited half a dozen times and nearly always had the reserve to ourselves.

In contrast, the most popular parks like Manuel Antonio can seem a bit of a zoo – both “…wow, so many incredible animals in one tiny place,” and “…there must be a thousand people here, what a zoo!.”

A delighted visitor stands out of the crowd at Manuel Antonio when she throws down a “sloth dance” after seeing the furry creature for the first time.

On our last visit to Rainmaker, on a typical day in January, at the height of the travel season we only saw one other family on the trails all day and had the waterfall pool entirely to ourselves.

The reserve is superior to the “must see” mega-parks in other ways too. The majority of the activity and biodiversity in the tropical rainforest takes place high above the ground in the canopy layer.

Besides a well maintained network of trails, several canopy suspension bridges and platforms put you in the treetops where the action is.

There are about 4 km of trails in two main loops, one climbs (rather steeply in some sections) to the ridge line (Fila Chonta) and crosses two large ravines on puentes colgantes – hanging bridges.  It reaches a mirador at a high point before dropping on switchbacks into the canyon and rejoining the other loop along the Río Seco (which is oddly never dry) past waterfalls and pools.

The forest at rainmaker is mainly old growth and compares favorably in diversity to Carara and other National Parks and Reserves the central Pacific.  The main habitats are tropical wet forest (rainforest) and riparian (river edge).

There are hundreds of species of birds in these hills and you never know which ones you’ll be lucky enough to see and hear.  One thing is for certain and that is you’ll see many more with a local guide who’s familiar with their habits and habitats.

The bridges and especially viewing platforms are excellent places to just set a spotting scope on a tripod, wait, watch and listen.  It’s not unusual to find a dozen species without moving.

Especially on a night tour, the stars of the show at Rainmaker are the frogs, snakes and other amphibians and reptiles.

The evergreen tropical forest provides the perfect humid environment even when it’s not raining and the stream fills a pond near the entrance creating a perfect frog habitat.  One of the first things you learn in Costa Rica guide school is that snakes feed on frogs so where there’s one there’s almost certainly the other.

I’d been trying for almost 30 years to get a picture of an anole mating display.  I’d probably seen 10,000 anoles and hundreds displaying but had never been quick enough to take the shot until one afternoon at Rainmaker.

With all the comparisons we’ve made with Manuel Antonio it’s only fair to mention the area where the National Park excels – seeing mammals.  It’s easier to see monkeys, sloths, coatimundi or the other species visitors to the tropics most want to see at Manuel Antonio compared to Rainmaker.

Animals are accustomed to people in the park and although bringing food was outlawed a couple of years ago, there was a long history of feeding the animals.  The park is also tiny and surrounded by development – there’s nowhere to hide.

On the other hand, Rainmaker and the undeveloped surroundings give mammals enough space to avoid humans and to some degree they do.  The same species are both places and you’re likely to see one or two in the reserve but not the half dozen almost guaranteed any day at the National Park (or a zoo…).

Admission to the reserve is $20.  Children 5 and under are free.  The normal operating hours of the reserve are about 7:00 a.m. until 6:00 p.m. but there are two guided tours that will give you early or late access.  Each is about $60 per person depending on transportation and other options (request details/reservations).

The rain forest at night is a whole different world as nocturnal species begin to croak, slither and scurry and a guided night tour starting around 6:30 p.m.  is the only way to see it.

5:30 a.m. is nearly nocturnal but there’s a hint of dawn light. The morning bird watching tour starts when the rain forest is waking up but everything is still moving slowly enough to see easily.

A delicious traditional lunch is available from about 11:30 a.m. until about 1:00 p.m. but requires advance reservations.  If you arrive before about 10:00 a.m. you can order while paying your admission or you can request it when making reservations below.

There’s no online payment form but reservations for the morning birdwatching tour, night tour, a guide any time or entry for a self tour can be made by contacting the reserve by e-mail rainmakercostarica@hotmail.com or phone (506) 2777-3565 or (506) 8960 3836

The turnoff to the north from the Costanera Highway (Hwy 34) towards the reserve is signed about 9 km south of Parrita and 12 km north of the entrance to Quepos (Manuel Antonio).  A 7 km gravel road past the tiny community of San Rafael Norte dead ends into Rainmaker a few meters past the Perro Vida micro-brewery.

Normally a two wheel drive car can (slowly) negotiate the road from the highway to the reserve entrance.  I say normally because it is Costa Rica and last time we were there a water pipe for the community below had broken and there was a washed out section that challenged our Land Cruiser.  Especially if you’re in a Yarus or other little bitty car you may want to contact the reserve for their recommendation.

The reserve is 30 minutes from Quepos, 45 from Manuel Antonio, 1 hour from Jacó, 1 hour from Dominical and 2.5 hours from San José.

The reserve offers two excellent guided tours that include transportation from Quepos (Manuel Antonio) and nearby lodges.  The morning birdwatching tour picks up at 5:30 a.m. and the night tour at around 5:30 p.m. 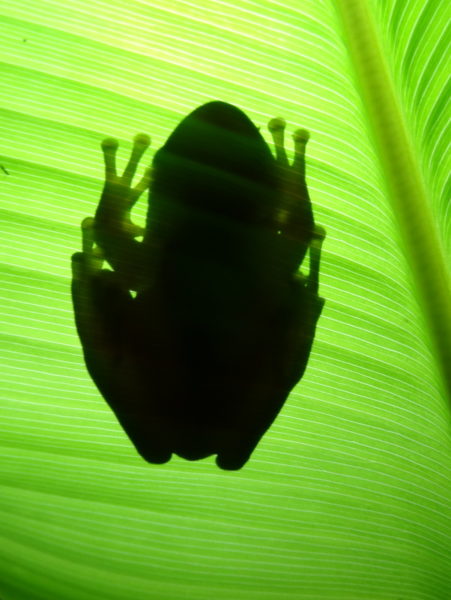 There’s NO public bus service up the road from the Costanera Highway (Hwy 34).  You could get dropped off at the turn and try hitching but it’s a very long, hot, dusty 7 km up the hill and there’s not much traffic.

Weather, Climate & When to Visit Rainmaker

As you might guess from the name “Rainmaker” this is a wet part of Costa Rica, but as you can see from our photos we’ve enjoyed a lot of sunshine too.  The monthly summaries on the drop down menu give you a general idea of rainfall and weather patterns.

This part of the Central Pacific has a very typical weather pattern with a dry season beginning by the end of December and lasting until about May.  Rains increase after August and precipitation is heaviest from September through November when there can be coastal flooding and mudslides in the mountains.

One of the best times to head to Rainmaker is during the most popular times to visit Costa Rica in general – December through April.  As we’ve mentioned several times, when other attractions are crowded you’ll have a chance for quiet solitude at this private reserve.

However, try to avoid Mondays in high season –  Manuel Antonio National Park is closed on Mondays so visitors are looking for alternatives and Rainmaker is one of the closest and best.

There are plenty of other canopy suspension bridges and waterfall swimming holes but there’s nowhere else that combines waterfall pools with hanging bridges like Rainmaker.