90% of Costa Rican restaurants have menus that are 90% the same (I just made that up but it might be true) so the menu below will give you a pretty good idea what it’s like eating in Costa Rica. 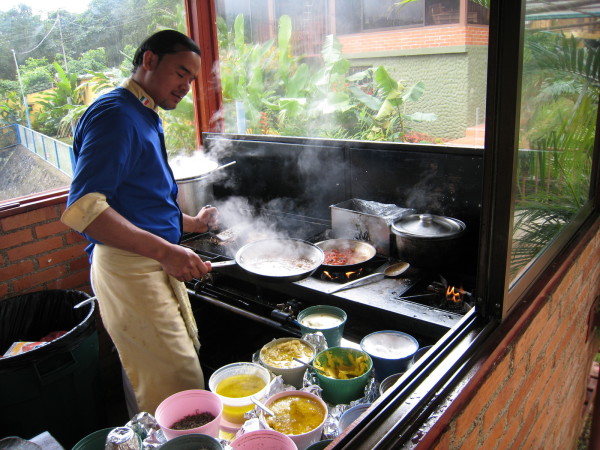 Unless you’re in a Chinese restaurant (and possibly even if you are) odds are very good that you’ll be choosing from some variation of the following menu when you sit down to lunch or dinner.

Casado literally means “married man” and describes what men in traditional marriages eat (when their wife cooks as opposed to bachelors eating a sandwich over the sink).

A multi-course meal on a single plate with rice, beans, ensalada russo or repollo (a cousin of cole slaw that usually includes grated carrots and cabbage in mayo or lime juice dressing) and a fill in the _______ meat – chicken, fish, beef or pork chop are most common.

Fill in the ________ with a meat that has been cooked “a la plancha.” It translates as grilled, but the interpretation of what grilled means is pretty loose in Costa Rica.  More often than not it involves a frying pan rather than a nice wood, charcoal or even gas grill.

“A la parrilla” and “grillado” also translate as grilled and offer a slightly better chance that what you order will be cooked on a grill rather than a flat top or frying pan.

When something is called “frito” (fried) it usually means deep fried.  Fried chicken is very common.

or horno de leña  means baked or roasted in a wood oven.  Usually for pizza or chicken but occasionally other meats.

Pretty obviously a hamburger but not always predictable what might be in it.

Occasionally we’ve had hamburgers with the beef patty replaced by or supplemented with slices of lunch meat style ham for a literal “ham” burger.  Some of the toppings are uniquely Costa Rican as well – pickled red beetroot slices, pineapple and fried eggs are a few of our favorites…and of course accompanied by Papas Fritas – French fries

Ubiquitous fruit in a blender drinks that simply have to be tried.  Check out Cas, Maracuya or Tamarindo for a typical Tico taste treat.

Most restaurants will also have beer and many a choice of white or red wine (usually only one variety from Chile – its the cheapest). Most sodas do not have liquor licenses.

A few other menu items common enough to mention

Imitation is the Sincerest form of Flattery

As we mentioned at the top, originality isn’t a benchmark of typical or even the best restaurant and soda menus.  If something works you’ll probably see it on every menu in town and we’ve watched as one particularly successful recipe swept (very slowly) across the country. 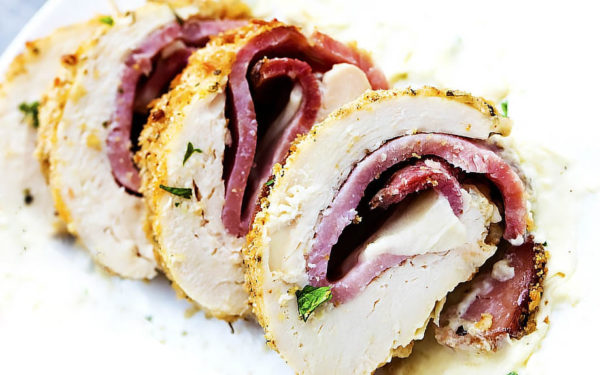 There are a lot of variations on cordon bleu de poulet roulée à la crème de dijon but some of the most unique are Costa Rica’s Gordon interpretations.

We first encountered the blue guy vs blue ribbon (gordon vs cordon) version almost 30 years ago in Puerto Viejo de Sarapiqui.  Some liberties were taken substituting with locally available ingredients and varying the preparation.   There was no rolling but the basic elements were present – fried chicken was topped with a slice of Velveeta and some sort of lunch meat.  The delicate dijon cream was replaced with sweet BBQ sauce.

Not half bad and definitely memorable.

It became even more memorable as we watched the migration of the original typo spread across Costa Rica as other restaurants copied the success.  I think the next place “Gordon” showed up was in La Fortuna with a tomato sauce.  In a few years he’d spread to the northern beaches of Guanacaste with innovations like wine sauce, bacon and cream of mushroom soup.

Over the next ten years the popular dish slowly migrated to Central Valley. The sophisticated big city cooks must have Googled it before adding it to their menus because the “G” disappeared and the recipe shifted back to more traditional ingredients.

Now it’s rare to find “G”ordon anywhere in Costa Rica but curiosity about the local version and nostalgia mean we definitely order it every time we do see it.

Instructions
Preheat oven to 400 degrees and lightly grease a casserole dish. Stir together breadcrumbs and parmesan in a medium bowl, and whisk eggs and water in another bowl.

Lay pounded chicken breasts out on a flat clean surface. Top each chicken breast with a slice of ham and then a slice of swiss cheese. Roll into a log starting with one of the longer sides and rolling toward the opposite side.

Dip chicken bundles in the egg mixture, coating all sides, then carefully roll in breadcrumbs to coat. Place in prepared casserole dish and secure with toothpicks so the bundles don’t come un-rolled.

Cover dish with foil and bake for 25-35 minutes until chicken is cooked through. Uncover and cook another 5-10 minutes to brown the chicken coating.

While chicken is cooking, prepare the sauce. In a medium sauce pan, melt butter over medium heat. Stir in flour until mixture clumps together. Gradually whisk in milk, working out the lumps as you stir. Add dijon mustard, garlic powder, parmesan cheese, and salt and pepper to taste.

When chicken bundles are fully cooked, cut into 1-inch sections, drizzle with the sauce and serve hot.