This is one of the few Costa Rican National Parks where walking quietly isn’t necessarily the best way to see things.  The marked trail along the beach is used mostly for observing turtle nesting, but the best way to see most of the park is from a boat.  That doesn’t mean you can’t get a workout while nature watching; there are plenty of places to rent canoes and kayaks (cayucas or botes).

The area protected by Tortuguero (turtle catcher) National Park was an archipelago of volcanic islands until alluvial sediments from the interior mountains filled in the spaces and formed a network of marshy islands.

Sand piled up where the river deposited land met the sea, and the turtle nesting beaches of Tortuguero formed.

The exceptionally high rainfall, and rich environment where the freshwater meets the sea makes the beaches, canals, lagoons and wetlands of Tortuguero areas of exceptional biodiversity and opportunity for nature lovers.

The Sea Turtles of Tortuguero

The main attraction of Tortuguero National Park is the turtles.  Green Sea Turtles (tortuga Verde, Chelonia mydas mydas ), leatherback (tortuga Baula, Dermochelys coriacea), and Hawksbill (tortuga Carey, Eretmochelys imbricata) turtles nest on the beaches here.  Green Sea Turtles neared extinction due to hunting of the adults for meat (they are easy prey when they nest) for turtle soup, and poaching of eggs for their supposed aphrodisiac qualities.

It’s difficult to reconcile the brutality of the turtle hunts of just a few decades ago with the environmental fervor of today’s eco-tourists.

“They always draw turtle from Turtle Bogue [Tortuguero].  They monopolize the whole beach here [Cahuita] and at Turtle Bogue too.   They get the turtle and ship it out on the big ships to the United States.  Green Turtle.  They sell the whole turtle.  They build some boxes and cement the boxes so no water come out.  And they put one turtle in each box, alive.  The small one they call ‘chicken turtle’and the big one ‘turtle,’ but they is both green turtle.  The sell of the hawksbill, they ship that sometimes to Germany.  They make comb and all things there.” – Selles Johnson in What Happen: A Folk-History of Costa Rica’s Talamanca Coast.

The sea along Costa Rica’s Caribbean is too rough to safely land and load boats – a technique was developed where the nesting turtles transported themselves to their demise.

As the turtles arrived on the beach at night they were flipped on their back.  In the morning a float attached to a line was secured to their flipper and they were released into the water to escape the scorching sun.  Fishermen in boats waiting in the calm water beyond the raging surf would hook the float with a gaff and easily haul the turtle aboard.

After transportation to the port at Limón the turtles were “stored” on their backs on land surviving for weeks before being butchered for the local market or boxed for live shipment as described above.

Dr. Archie Carr of the University of Florida formed the Caribbean Conservation Corporation in 1959 to study and protect sea turtles, and the turtle-tagging program he began at Tortuguero in 1955 continues today.

It’s possible to see stragglers laying eggs during the day, but the majority of the arrivals occur at night.  You will need a guide to visit the beaches at night (no one is allowed on the beach unaccompanied after 6:00 pm).  For independent travelers, this can be arranged through the kiosk in the middle of Tortuguero village or through your hotel.

When you and your guide walk out onto the beach under the starlight to watch the turtles struggle up the beach, dig their nests and lay their eggs, think about their future.

If you are exceptionally lucky, you might chance to see an even more spectacular event, the newly hatched turtles race to the sea. There is some overlap of the nesting and hatching seasons for the different varieties of turtles.  The eggs incubate in the warm sand for 7 to 10 weeks before the babies hatch, dig their way to the surface and make the long dark scuttle from the nest well above the high tide mark, across the beach to the surf.

Although hunting turtles for meat and shells has been mostly eliminated by laws preventing import to the U.S. and Europe, egg poaching is still quite common.  Many sea turtles’ eggs end up as bocas (appetizers) in Costa Rican bars.

The Canals, Lagoon and Rivers

Sue in a canoe on a Tortuguero sendero acuatico

The extensive network of freshwater creeks and lagoons behind the beaches of Tortuguero are home to seven species of river turtles, Spectacled Caiman, Southern River Otters, a number of crustaceans, and over 50 species of freshwater fish.

If you take a trip on a tour boat, or paddle a canoe through the freshwater canals you are also likely to see Spider, Howler and Capuchin Monkeys and dozens of species of birds.  If you are lucky you might spot an endangered West Indian Manatee.

Atlantic Snook and Tarpon are just two of the species that attract anglers from all over the world to this region (no fishing in the park, but the rest of the area is great).  A good friend of ours has taken several trips to the Río Parismina Lodge south of the park and counts them among the best experiences of his life. 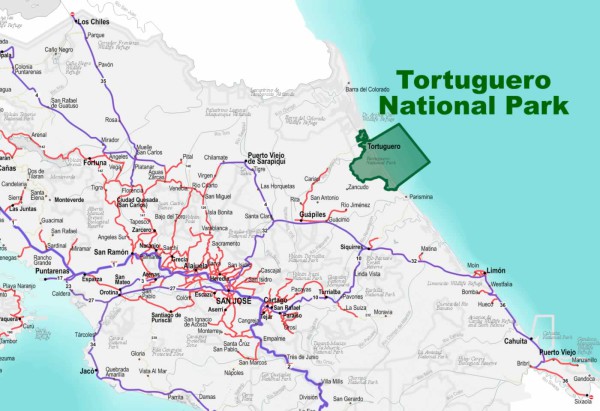 The hopping off point for Tortuguero National Park is Tortuguero village where you will find lodging, restaurants, and tour operators. There are no roads to Tortuguero. Access is by boat from Moín near Puerto Limon, or by small plane (see details of getting to Tortuguero by boat).

Even if you are an independent traveler you should consider visiting Tortuguero on a tour because of the difficulties associated with making your own arrangements, and limits on the total numbers of night-time beach visitors.  It’s also possible that the combined costs of independent arrangements will exceed the cost of a tour.

The Green Sea and Hawksbill turtle’s nesting season runs from July to October with the peak in August, and the extremely rare and difficult to see Leatherback turtles nest from February to April.  It is possible to see individual turtles at any time of the year.

The weather in Tortuguero National Park should not be much of a consideration when deciding when to visit.

It rains here all the time, and the peak nesting season is in the rainy season when Caribbean rains can blow in on a north wind and stay for weeks.  This is one of the rainiest areas of Costa Rica, and even in the dry season afternoon showers are common.

Use the drop down menu to see weather patterns and other seasonal information for the month you are thinking about visiting the National Park.

The Dr. Archie Carr Wildlife Refuge is named after the father of turtle conservation in Costa Rica and protects a strip of beach north of Tortuguero village near the landing strip.

The National Park protects 19,000 hectares with elevations from 0 to 390 meters (0 to 1280 feet) at the top of Cerro Tortuguero. The habitats represented here are beach, estuary, marine, freshwater riverine, and tropical lowland rainforest.

Tortuguero was protected as a nesting sanctuary in 1963 and declared a National Park in 1970 largely due to the efforts of the Caribbean Conservation Corporation and a turtle biologist named Archie Carr.

Nearly 20 feet (6,000 mm) of rain falls on Tortuguero yearly. Expect rain at any time of the year, but the three wettest months are December, June, and July, and the three driest are February, March and September. Yearly average temperature of 79 °F (26 °C)

As of mid-2017 an area in the southern part of the park has been closed indefinitely to protect endangered Jaguar habitat.  The closed area extends from the trail to approximately 2 km north of Laguna Jalova (aka Jaloba).

This should have little or no impact on tourists.  The vast majority of visitors stay 15 km to the north near Tortuguero Village, Archie Carr Refuge, the nesting observation beaches, and the water trails all of which remain open.