The diversity found on the Osa peninsula is not surpassed by any region of similar size anywhere on earth. 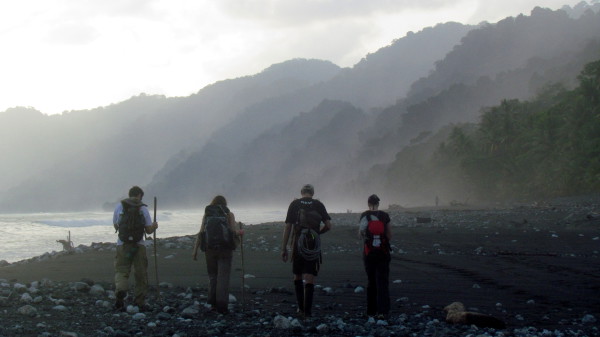 Gary Hartshorn’s enthusiasm was only exceeded by the forest’s when he wrote in Costa Rican Natural History that “these forest are by far the most exuberant in Central America. In fact, the Corcovado forests are just as impressive in height as the best forests I have seen in the Amazon basin or the dipterocarp forests of Malaysia and Indonesia.” 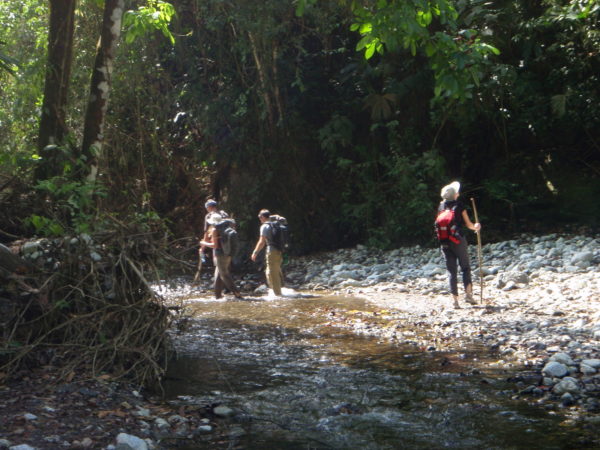 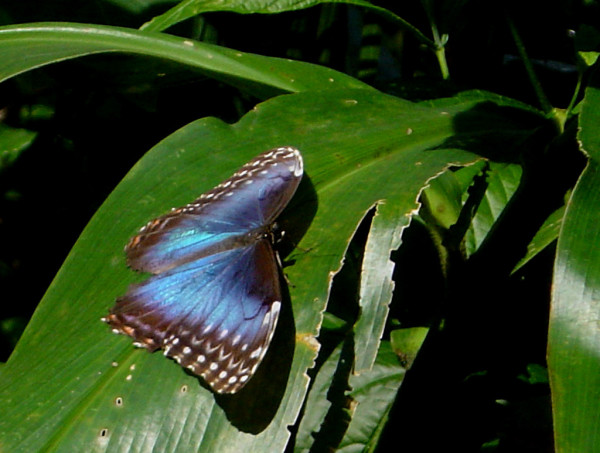 He goes on to note “The Corcovado forests exemplify the popular conception of the tropical rain forest, with a multitude of species, very tall trees, spectacular buttresses, large woody lianas and abundant herbaceous vines.”  Daniel Janzen, the editor of the same volume speculated that the peninsula contained the complete tropical insect ecosystem from Mexico to Panama.

Corcovado National Park is the backpacking experience of a lifetime. It encompasses the only remaining old growth wet forests on the Pacific coast of Central America, and 13 major ecosystems including lowland rain forest, highland cloud forest, jolillo palm forest, and mangrove swamps, as well as coastal marine and beach habitats.

There is a good chance of spotting some of Costa Rica’s shyest and most endangered inhabitants here; Baird’s Tapirs, Jaguars, Scarlet Macaws, Harpy Eagles, Red-backed squirrel monkeys and White-lipped Peccaries. It is wet, remote and rugged, but the trails are relatively good, and the camping areas near the ranger stations are grassy and well drained. 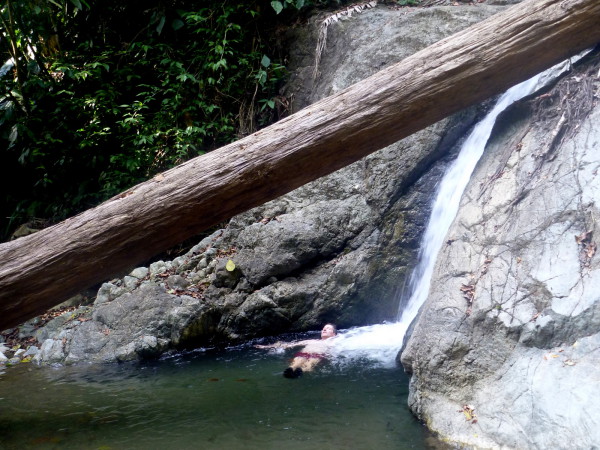 If you have ever imagined yourself swimming up to a deserted golden sand beach lined with coconut palms, then rinsing off under a waterfall surrounded by the verdure of the rainforest. Then you’ll find Corcovado’s 23 miles (39 km) of beaches appealing. We walked 11 miles (18 km) of beach one day and saw one other person. Take care where you swim, there are areas where hammerhead sharks school (there has never been a reported attack), and crocodiles and bull sharks are common in Corcovado Lagoon and the estuaries of the Ríos Claro and Sirena. 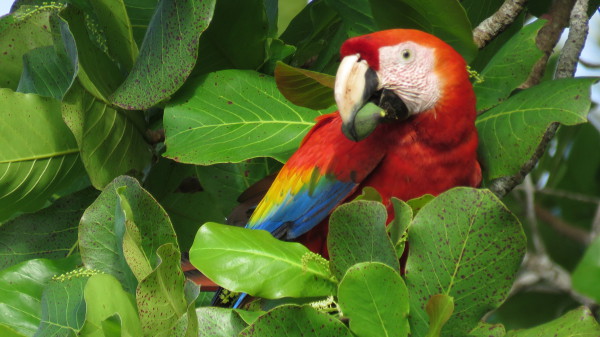 Over 40 species of frogs including red-eyed tree, rain, glass, dink, and poison arrow varieties, dozens of snakes including a variety of Boas and the dreaded bushmaster, as well as 28 species of lizards. More than 100 species of butterflies and at least 10,000 other insects call the Osa peninsula home (including a few you may wish were endangered).

More than 400 species of birds including 16 different hummingbirds and the largest number of scarlet macaws anywhere in Central America.

Note: if you’re planning a visit please see the details of a number of regulatory changes including food and camping restrictions and a prohibition against unaccompanied visitors (everyone must have a guide at all times).

There are a total of six ranger stations for Corcovado.  Five stations are inside the park and two have camping areas, potable water, and radio or telephone contact with the outside world. There is also sometimes space under a roof for your sleeping bag. 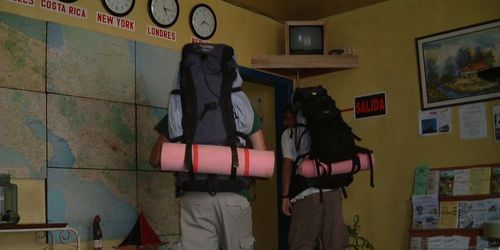 There are several ways to enter Corcovado.  Carate is 26 miles (43 km) southwest of Puerto Jiménez along a rocky muddy road that deteriorates from a reasonable gravel surface to  a serious 4WD challenge as you round Cabo Matapalo.  There are a pulpería for last minute supplies, a campsite with showers and restrooms, and several lodges in the area. 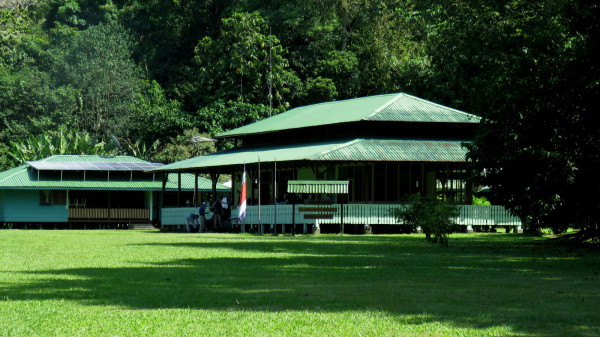 Sirena ranger station is 9 miles (15 km ) west along the beach. At high tide there are several rock outcroppings that block the way. In addition to camping Sirena has a large old bunk house (renovated in 2016) where you can set up your mosquito net, and roll out your sleeping bag under a roof (reservation required). The airstrip at Sirena is open to charter or private flights with advance notice.

From Sirena you can continue mostly along the beach (again only at low tide) to the San Pedrillo ranger station (14 miles, 23 km).  Bunks and showers are available in addition to camping (reservation required).  Lodges at Drake bay 11 miles (18 km) to the north often arrange entry to the park at San Pedrillo. 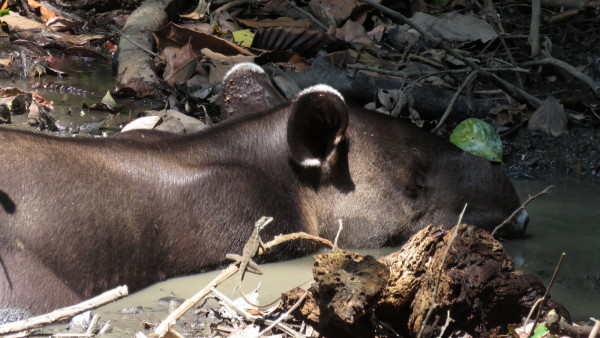 From Sirena you can also turn north and inland past Laguna Corcovado and climb towards the cloud forest and Los Patos ranger station (10 miles, 16 km) where there are camp sites, and 12 bunks that are not occupied by rangers (although they are almost always reserved by researchers).

From Los Patos it’s 8 miles (13 km) through National Park and a strip of Golfo Dulce Forest Reserve to the main road at La Palma.  The trail between Los Patos and La Palma winds in and out of the Río Rincón so many times you may start feeling a little amphibious.

The 7 km long trail from the El Tigre station at the end of the Dos Brazos road on the southeast corner of the park was opened to public access late in 2014.  Reservations and guide services are required and available from local lodges.

The Los Planes Station and trail are currently closed.

If you are not a seasoned back country traveler & familiar with tropical trekking it’s best to use a professional guide for your own safety.

As a ferry terminal and the end of the bus line, the town of Puerto Jimenez serves as an unofficial gateway to Corcovado. It has developed into a budget travelers haven, with a large number of inexpensive cabinas, restaurants, travel services and rental outlets. You can easily arrange for transportation into the park, as well as guide service, or a tour if you desire one. Bicycles, sea kayaks and horses are also available for rent or as part of a tour.

Use the drop down menu to select any month of the year for a summary of the typical rainfall and weather patterns. You will probably get wet whenever you visit Corcovado, but a drenching is guaranteed August through November.

If you will be camping, you probably want to try for the drier months of January through April. If you have the fortitude to withstand afternoon showers and a really good drenching or two, a visit during the rainy season may be rewarded (if you can get to the park…) with empty trails and better wildlife viewing in the absence of the crowds.

There are a number of access points for Corcovado, but Puerto Jiménez is generally considered the gateway to the area.  If you don’t have a 4WD vehicle transportation to the park boundary is available by private or collectivo taxi from there.  If you’ve got a reservation with a lodge they’ll be happy to help you with travel arrangements and suggested routes.

SANSA flys out of Juan Santamaría (where the International Carriers arrive) several times a day to Puerto Jiménez ($78), Golfito ($78), and Drake Bay ($80).

Prices are each way and there is no discount for round trip ticketing on either airline.  Be sure to note the 25 lb baggage restrictions and other recommendations, especially if you are traveling with surfing or scuba equipment.

Flying directly into the park on a charter is also possible at Carate east of the park boundary at Madrigal or into the heart of the park at Sirena.

Taking of from Carate headed to Sirena and Drake Bay after a trek across the peninsula following the south east boundary of the park on the Sendero de Oro.

Alternatively head west on the “new” Caldera road (Hwy 27)  from San José towards Jacó and follow the Coastal route (Hwy 34) to Palmar where it intersects the Pan American and you can pick up the instructions above.

Three access routes for the park branch off of the road to Puerto Jiménez. The first is the turnoff (right) for Drake Bay (4WD, typically impassable in rainy season) at Rincón 44 km from the Pan American Highway.  The right turn for the track (seriously 4WD, typically impassable in rainy season) towards the Los Patos station is 9 km further along at La Palma and towards Dos Brazos and the Tigre station 18 km past that.

Total distance from San José to Puerto Jiménez is 240 miles (395 km, approx. 9 hours driving time). The final road access to Corcovado is past Puerto Jiménez to the south and 43 km around Cabo Matapalo to Carate (4WD recommended).

(Get a current detailed roadmap printed on waterproof tear resistant synthetic. Highly recommended of course since we publish it)

Passenger ferry to Puerto Jiménez from Golfito, Departures every day from the Municipal Dock in Golfito (Muelle) at 11:00 a.m., Returns 6:00 a.m., 1/2 hour

Lanchas or boat taxis depart from Sierpe for the trip downriver to Drake Bay (local bus service available from Palmar Sur) either by reservation through your lodge or by arrangement on the dock at the end of the road.

Certified Guides Required for all Visitors

“Through the administrative decision number; R-SINAC-ACOSA-D-011-2013 it is official that as of  February  1st of  2014,  all  visitors  to  Corcovado  National  Park  will  be  required  to  be accompanied by a local tour guide”

The only legal way to enter Corcovado is on a group or private tour purchased from a certified operator and accompanied by local guide who has registered in advance with the park service.  Freelance guides are not permitted (even if they have ICT certification).

Purchase tours in advance through a travel service, the lodge where you have reservations or in person from a local tour office.

Despite the ominous sounding declaration that violations will be “sanctioned by Article 307 of the Penal Code of Costa Rica which stipulates prison of up to one year.” we spoke with visitors inside the park early in 2016 who were unaccompanied.  We were told by these affable scofflaws that it is still possible to purchase permits and camping reservations at the main station in Jiménez in person without producing an accompanying guide or guide permit.

For foreigners entry permits are $15 per day with a two day minimum – so $30 plus $15 for each day after the second.

Big changes arrived at Sirena station in the first half of 2017.  Services previously provided by SINAC (the parks service) have been taken over by the Asociación de Desarollo Integral (ADI) of Carate, a nonprofit consortium of local hotel owners tour operators.

Other places in the park still allow visitors to bring food but please – PACK IT IN PACK IT OUT!

Watermelon rinds are not natural to the rain forest ecosystem.  People thinking “oh, it’s natural, it will degrade” then tossing food scraps in the bushes was one of the main motivations for the strict new “no food allowed” regulations at Sirena station.