After an exceptionally active and long hurricane season NOAA predicts that precipitation will be normal for the first half of 2021 in Costa Rica.  That means very dry on the Pacific side until May.

The Papagayo winds that began in mid-December typically continue with gusts up to 100 kph in the central valley and up to 120 kph in Guancaste and the north through January.

Typical afternoon and overnight rains on the Caribbean side mix with a few daytime showers in the “tropical” weather pattern that prevails there every month except September and October.

There are thousands of websites out there with links and embedded forecasts from weather servers and they’re all wrong. (skip to Useful Costa Rica Weather Forecasts)

Well sort of wrong anyway.  If what you’re trying to find out is “what will the weather be like next week when I visit,” then a forecast that’s unvarying – saying “chance of rain” for 15 days in a row – is pretty useless and will definitely give the wrong impression.

It’s the tropics, there’s always a “chance of rain.”

Weather.com and other sites serve weather maps based on current conditions and readings from a few automated weather sensing stations around the country.  Unfortunately based on that limited data except in the driest months in the driest regions the forecast is nearly always some rain.

I can’t count the number of times I’ve gotten phone calls from panicked travelers asking if they should cancel their trip because “there’s an 80% chance of rain every day.”

During hurricane season (June 1 through November 30) the U.S. National Weather Service and NOAA (National Oceanic and Atmospheric Administration) do an excellent job of observing, tracking and predicting the paths of low pressure systems, tropical storms and hurricanes as they develop.

In storm season the “Tropical Weather Outlook” webpage is updated with a new map, probabilities and projected movements every day at 2 am, 8 am, 2 pm, and 8 pm eastern time.

This is basically all the information used by weather website, television and newspaper meteorologists.  They add a few seconds of video of a reporter leaning into the wind with their jacket whipping and palm trees bending in the background but if you want the very latest information straight form the source this is where to get it.

The best source for weather related alerts from within Costa Rica is the Instituto Meteorológico Nacional web page where they also have an RSS feed version link.

The Comisión Nacional de Prevención de Riesgos y Atención de Emergencias – Costa Rican emergency alert system used to provide good information for ongoing weather related disasters.  In May of 2019 they introduced their fancy new website with a separate listing for current alerts but unfortunately a year later it’s still broken.  They also announced a phone app but it doesn’t appear to have any data feed.

The best simplified weather forecast we’ve found for Costa Rica, and the one to use in the dry season (when the NOAA/NWS hurricane page is not updating because there are no hurricanes from December through May) is the ten day hourly forecast on Weather Underground.

We’ve found these reports quite reliable in the U.S. and Europe but they’ve only recently expanded to Costa Rica so we’ve only tested in a few of places a few times.  They seem pretty good as long as you’re aware of the limitations.

Below are links to regional forecasts.

Some locales are listed twice and linked to two different stations because they are in between and checking both reports may be helpful.

Costa Rica is a land of micro climates and the weather can vary dramatically in locations just a few miles apart.

If you click “change station” on the recommended ten day forecasts above weather underground shows you a map with over a hundred station location options for Costa Rica.  If you click on different locations it looks at first glance like there is a detailed report and prediction for each.  However, if you look closely you’ll see it’s actually the identical predicted precipitation patterns, temperature profiles and wind speed cloned from the main stations and displayed on each local station.

In other words, it looks like there are very detailed micro forecasts but there are not.  The local data (current and historical temp, wind etc.) is from an automated station located exactly where the dot is shown on the map but the forecast may not be.

I don’t think they are intentionally misleading – this is the best forecast they have for each of the little stations – but don’t be fooled into thinking that they collected and interpreted data then made a forecast specific to the microclimate your lodge is located in.  Be aware that if the main station is 20 miles away across the continental divide the upcoming weather could be utterly unrelated to what is displayed!

Combining it all to Make Your Own Forecast

If you want a better idea of what sort of rainfall and sunshine patterns you can expect you’re better off making your own forecast.  I’ve always thought this was true and a while back it was confirmed by a couple of friends who own rafting companies.  Their livelihoods depend on making a call every day that the rivers won’t be dangerously high from excessive rain.  They both arrived independently at the same technique that I use.

Okay so every weather forecast is a bit iffy but you can certainly do a better job than the little prediction pop-ups on the weather websites – at least for Costa Rica where they work with very limited information.

First you need a general knowledge of Costa Rica’s seasons and weather patterns.  That’s available on the handy drop down menu below (just select the month you are traveling for a summary).

Second you need some information on what is brewing off the Pacific and Caribbean coasts (or has already brewed and is landing).  That’s available by clicking on either the tropical storm map that we’ve set criteria for (click image above) or more in depth analysis at NOAA (click image below).

Third you combine the two to figure out that since you’re traveling in February and the Guanacaste beach resorts are bone dry then and since the map isn’t showing any huge rainy low pressure systems tracking towards Costa Rica you’re good to go!  No need to call Ray and Sue!

You don’t really care that there’s an 80% chance of it raining somewhere in the country (probably on the southern Caribbean or high in the Talamanca mountains).

Of course if there is a huge hurricane bearing down in the Gulf of Mexico or a giant tropical depression trying to collect itself off the Pacific coast you may want to get out your umbrella.

Many travel websites have what looks like very detailed information for very specific parts of Costa Rica but they’re just putting different labels on the same info to try to make it look specific.  There are really only two fully, reliably and continuously functional METAR feed stations in Costa Rica (at SJO and LIR airports) with a dozen others that send very limited data.

There’s no big network of ground based Doppler Radar which is where a lot of the specifics in U.S., European and Canadian weather forecast come from.

2020 was a record setting year for hurricanes.  There were so many they ran out of names starting with the 26 letters of the alphabet and had to resort to the backup of naming storms after Greek letters.  The final two storms of the season clobbered Nicaragua, Guatemala and Honduras but didn’t hit Costa Rica directly.  The low pressure associated with the storms dragged warm moist air from the Pacific towards the Caribbean causing torrential rainfall and flooding reminiscent of Otto in 2016.

Tropical Storm/Hurricane Nate Note: The eye of the storm was several hundred kilometers to the north of Costa Rica but the airflow patterns created by Nate caused major rainfall and flooding October 5, 2017 (See current road, travel and weather status).  The recent Western Caribbean Disturbance 93L seems to be heading north without organizing into a Tropical Storm or causing significant damage (October 27, 2017).

Tropical storm Nate formed in the Caribbean east and north of Costa Rica and never made landfall there but the wind patterns drew warm moist air from the Pacific across the country causing intense rains on the west coast and in the mountains.

Tropical storm Otto is moving towards Costa Rica from the Caribbean (see current map).  It is predicted to briefly reach Hurricane strength (Category 1 – the weakest Hurricane) around the time it makes landfall later today.

Other General Weather and Predictions

The U.S. NOAA and National Weather Service Climate Prediction Center was spot on predicting low pressure systems and tropical storm Alvin would lead to higher than normal rainfall across Costa Rica through the first half of July 2019.  While there was no dramatic flooding there were consistently more thunderstorms and rain across most of the country. 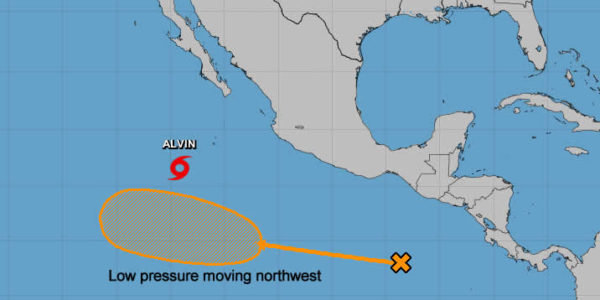 The U.S. National Oceanic and Atmospheric Administration (NOAA) weather service predicts with “high confidence” that 2019 daily rainfall across most of Costa Rica will be normal compared to historical averages for January and February.

Despite a mild El Niño (sometimes causes drought on Costa Rica’s Pacific side) there no variations from normal dry season weather predicted.

Don’t make the mistake of assuming that “drier” is the same as dry.  December is still a rainy season month and although there will probably be less rain than average but that can still be pretty wet.

October 2018 got a fast start as the rainiest month of the year in Costa Rica collecting huge rainfall totals in the first two weeks.