The area of the Tempisque Basin where the Nicoya Peninsula joins the mainland has a foundation of relatively soft limestone. Water has cut extensive caves through Cerro Barra Honda and the other small mountains creating the best know feature of this National Park. However, the park also has well maintained hiking trails. The protected tropical dry forest (though mostly secondary) within its borders is some of the last in the world, and very different from the rain and cloud forests that attract many ecological tourists to Costa Rica. 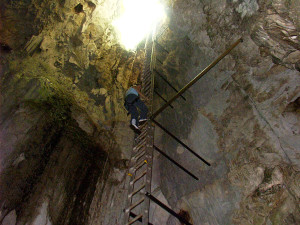 The caves are all in relatively good condition because their vertical entrances are difficult to negotiate. This is also why you need climbing gear, a guide, and permission from the Parks service in advance to enter them. 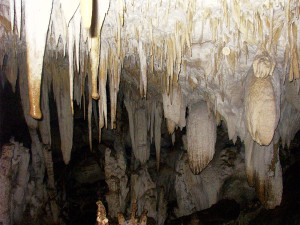 The caves range from a few feet to over 780 feet (240 meters) deep. Pozo Hediondo (Fetid Pit) Cave was named for the aroma of the guano deposited by thousands of resident bats.

Until the caverns were discovered and explored in the late sixties, many believed that Cerro Barra Honda was a volcano because of the roaring sounds made by the bats as they departed the caverns en masse, and the fumes from the caves they occupied. 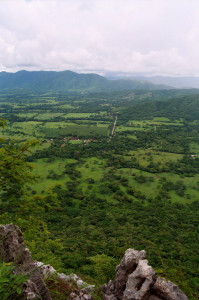 The network of hiking trails used to access the caverns are great for exploring one of the rarest habitats on earth, tropical dry forest. The juxtaposition of capuchin monkeys and cactus seems odd, and some of the trees flower only after they’ve dropped all their leaves. Any time of year you can hope to see howler monkeys, deer, racoons, peccaries, kinkajous, agoutis, and anteaters.

Maps are available at the ranger station. The main trail is an undriveable continuation of the entrance road that leads through mostly secondary forest to cerro Barra Honda (1,450 feet, 442 meters) where you are rewarded with spectacular views of the Tempisque valley.

When to Visit and Where to Stay at Barra Honda

The caves are not open in the wet season because of the danger of flooding by the torrential rains that carved them from the stone. If you are a spelunker the dry season is your best bet.

Cabinas and Camping – If you are traveling on a budget, spend the night. It’s one of the few places you can get a bed and a roof inside a National Park. At the ranger station a few minutes up a good gravel road from the entrance (closed from about dusk until 8:00 am) there are four rustic cabinas with bunks for six or eight each.

These provide an excellent opportunity for travelers who don’t have either camping equipment, or the money for a lodge or ecocamp, to spend the night in the forest. When we stayed we had the place to ourselves and were on a hiking trail by around 5:15 am (about 15 minutes before sunrise) in order to catch the increased activity of the forest’s residents. We also felt comfortable walking on the broad main trail after dark, when you hear and see a whole new group of birds, insects and animals.

There is a camping area next to the ranger station, across the road from the cabinas.

If you don’t stay in the park, Nicoya is the closest alternative with lodging options in most price categories (nothing on the top end however).

Driving directions
From San José, take the Interamerican Highway (1) north just past the turn for Las Juntas de Abangares. Turn left on 18 towards San Joaquín and then follow the signs for the spur to the new Tempisque bridge. Once you rejoin the main road, continue southwest about 10 km then turn right towards the villages of Barra Honda and (also known as Nacaome) Santa Ana, and follow signs for the park entrance. The park headquarters is through the gate (closed at dusk) less than a mile up a good gravel road (4WD not required) on the left.

Bus
Unfortunately there is not a direct way to reach Barra Honda by bus. You can get a bus from San José to Nicoya, then there is one bus a day (12:30 p.m.) from Nicoya to Santa Ana which is about a 30 minute walk from the entrance.

The protected area is 5,600 acres (2,300 hectares, 8.75 square miles, 7 times the size of central park NYC) with elevations ranging from 20 to 442 meters (66 to 1450 feet). The habitats represented here are margin/edge and regenerating tropical dry forest.

Hours
The gate is open from 8:00 a.m. until dusk, if you are staying in the park, the rangers leave the station door open until they go to bed around 8:30 p.m.

Hiking trails
Maps are available at the ranger station. The main trail is an undriveable continuation of the entrance road that leads through mostly secondary forest to cerro Barra Honda (1,450 feet, 442 meters) where you are rewarded with spectacular views of the Tempisque valley.