Obviously the Covid 19 pandemic has replaced weather, crowds, bargains and wildlife migrations as the number one consideration determining the best time to travel to Costa Rica.

When Costa Rica will re-open to tourism will mainly depend on developments in the U.S., which with more cases than any other country is the new epicenter of the pandemic.

Scientists are estimating that with most U.S. communities now “staying at home” after initial denial and delays the number of deaths will peak in April and decrease below epidemic levels by early June 2020.  This assumes no catastrophically ignorant government actions that cause infections to begin accelerating again.

By the time the first round of infections subsides we’re hopeful that the U.S. administration will have learned from countries like South Korea where aggressive testing and identification allowed them to quarantine sick and exposed individuals instead of the entire population and reduced infections by one half.

It will probably take another few weeks for both Costa Rica and the U.S.  to demonstrate they have internal transmission under control.  Some sort of testing may be required but optimistically  international visitors may be welcomed in Costa Rica again by July but probably by September or October.

If you’re planning a future trip or wondering when to reschedule the seasons in Costa Rica are described below.

When Should You Go to Costa Rica?

The most popular time for Costa Rica vacations is the holiday peak season around Christmas and New Years but the best time to visit may be a couple of weeks later after the crowds thin.

The rains end in December but the forests remain lush into the new year while dry sunny weather prevails on the beaches.  It’s one of the best times for wildlife when tropical species like monkeys and sloths are joined by migrant birds from the north, humpback whales giving birth in the warm waters, and sea turtles nesting on shore.

In fact there’s no bad time to go.  It really depends on what your travel goals and priorities are.

If you have a time of year in mind select a month from the drop down menu to access a summary of weather and rainfall, tides, prices, lodging availability, wildlife migrations, bank and school holidays, local fiestas and festivals, plus other seasonal information.  If you’re still overwhelmed by the possibilities get our personalized suggestions…

When is the Best Weather?

The best weather depends on where as well as when.  There are a number of distinct microclimates in Costa Rica and it can be flooding in one zone but bone dry in another.

We’ve visited at every time of year and while there are advantages to the high dry season (see suggested itineraries) we often prefer the low rainy season (referred to by the tourism board as the “Green Season”). 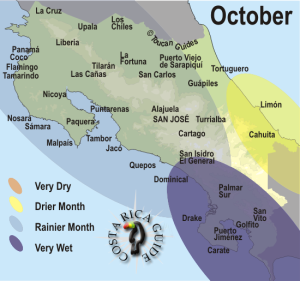 As you can see by comparing the weather maps there are a few places where it would be ill advised to visit at specific times because of the weather (the Osa/Southern Pacific in October for example) and some undiscovered and uncrowded times with gorgeous weather (the Caribbean in October).

Other comparisons and suggested alternatives are noted in the summary of each month linked in the drop down menu.

Don’t forget while browsing all the weather and climate data that one of the reasons you’re visiting Costa Rica is because it’s covered in amazing rain forests, and surprise, surprise – it rains in the rainforest.

If you’re only looking for sunny days on the playa then Costa Rica has a zone and season that guarantees that too – January, February and March are bone dry in Guanacaste (the northwest beach area).

Crowds, Costs and Other Factors?

There used to be distinct high and low travel seasons in Costa Rica but the secret is out.  July and August are almost as popular as December and January.

There are still cost differences depending on dates.  For example, Christmas and Easter peak weeks are nearly twice as expensive as the average and the shoulder months (May/June and  Sept./Oct./Nov.).

This handy budget calculator can help you compare costs and estimate travel expenditures based on your what? when? where? and how? preferences.

If you’re going to travel over Christmas, New Years or Easter you should book about a year in advance for the best selection and some small boutique hotels and lodges are filled even further in advance.  Shifting your travel by a few days away from the holidays can make a huge difference.

If there are other factors you’re wondering about let us know and we’ll do our best to help figure out the best time to go.

NOAA noted the end of the El Niño weather pattern in August of 2019 which means a return to normal rainfall patterns for 2020.

Ash from intermittent eruptions of Turrialba volcano occasionally disrupted operations at San Jose (SJO) airport between 2015 and 2018.  Although the activity continues it hasn’t been a problem for operations heading into 2020 – see Choosing an Airport for more info.

Use these quick descriptions to get the big picture of good, better and best then click on any month for details.  You may also want to try the best time quiz to determine when you should visit.

The New Year is one of the most popular holidays for Ticos, Europeans and snow birds from the U.S. to head to the beach.  It’s very sunny, warm, crowded and expensive.  Wait a couple of days and you’ll discover one of Costa Rica’s best kept travel secrets.  Around January 5th the prices drop, the crowds disappear and there are four to six weeks of perfect weather.  The rainy season just ended so the forests are still green and lush and the rafting rivers and canyoneering waterfalls still have plenty of flow.  – BEST TIME

The number of travelers starts to pick up in February.  The dry season is well established and the trees of the tropical dry forests on the Pacific side in Guanacaste and Nicoya are dropping their leaves.  The rivers in the central mountains still have plenty of water and the Caribbean side is in it’s normal pattern of afternoon showers.  February is a great time to visit the Osa Peninsula and it’s the beginning of the nesting season for the Quetzales in the cloud forests. – BEST TIME

These two months get lumped together because they’re very similar.  It’s busy because of north American spring breaks and mobbed the week of Easter when the Costa Ricans all go on vacation at once.  The southern, central and eastern parts of the country are still green but some river levels drop too low for rafting.  The northwest is bone dry, the trees are bare and the rivers are reduced to trickles there. – BETTER TIME

The transition into the rainy season is gradual with showers starting in May and picking up in June.  The dry season dust is settling and the rivers are filling up.  The wildlife breathes a sigh of relief as things cool down a little and the tourists all but disappear.   Sea Turtle nesting is in full swing on many of the beaches for many species. – GOOD TIME

This is the best off-peak time to visit Costa Rica.  Costa Rica is a great escape from the snow but it’s also a fantastic summer beach destination and the rains typically let up a bit this time of year.  Inland the rivers are at their best for rafting and waterfall rappelling.  The Sea Turtles are still around and the Antarctic Humpback whale pod is taking up residence in the warm waters of the Golfo Dulce.   – BEST TIME

This would be a good choice if you want the whole Pacific side and central mountains to yourself.  These are the rainiest two months in those zones and the grey weather is accompanied by the biggest discounts of the year.  The Caribbean side on the other hand is enjoying its driest weather.  – BEST TIME FOR THE CARIBBEAN

The first six weeks are something of a gamble for weather and could easily be the wettest of the year or relatively dry anywhere in Costa Rica.  Discounts are available and reservations are easy to come by.  By the last two weeks of the year it usually drying out in the Pacific northwest but come rain or shine it’s the peak season with the highest prices and biggest crowds everywhere in the country.  – GOOD TIME

Other Bests in Costa Rica

This menu links to our suggestions for other “bests” in Costa Rica – places, wildlife watching, activities, secrets and more.