Arenal volcano was the most spectacularly active in Costa Rica. For 30 years hotels in the region touted their views of the lava flows and red hot boulders ejected from the volcano glowing in the darkness.

For the past seven years the red hot lava has been biding its time and the activity at Arenal has been limited to puffs of steam and a few deep rumbles.  No one can predict when this quiet cycle will end and the glowing red orange cone will once again dominate the night sky but even when it’s not erupting spectacularly the peak is still an imposing and beautiful sight.

There’s always a chance that clouds will obscure the top of the volcano but volcano but if you stick around a couple of days taking advantage of some of the other attractions in the area you’re likely to also get great volcano views.

The perfect cone is visible from most anywhere in the area, but if you want a really good view your best bet is to stay in one of the “observatory” type lodges, and get up with the sun. The clouds tend to move in soon after sunrise.

Twenty years ago there were hiking tours based out of La Fortuna de Arenal which used to take you up the west ridge to the the crater rim. Tourists were frequently injured and occasionally killed by ash, falling cinders and toxic fumes so in 1998 a 4 km exclusion zone was created and access restricted to only park officials and scientists.

When the big eruptions and lava flows stopped guides started leading people to the crater again.  Despite appearances it’s not much safer now than it was when the volcano was active.  Rolling boulders the size of semi trucks and huge landslides are still daily occurrences and toxic gases are continuously vented at potentially fatal concentrations.

It’s illegal and extremely dangerous but if you ask around in Fortuna it won’t take long to find someone who’ll show you the way for a price. 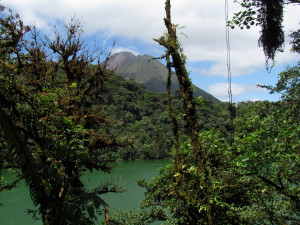 There’s another volcano in the park that few people know about – Cerro Chato.  This extinct volcano (last erupted a little over 5,000 years ago) has a lopsided crater that cradles a small lake which is surprisingly brisk even after a hot hike up.

The crater is inside the National Park but the two trails leading to it start from private property where the owners collect fees to cross their land. One trail starts near the Arenal Observatory lodge on the southwest and the other from La Fortuna Waterfall to the northeast.  The trail is extremely steep in sections and depending on recent rain and maintenance may be quite rutted and muddy.

Portions are nearly vertical on the last section down from the rim to the lagoon and you’ll find yourself using tree roots and branches as a sort of crude ladder.  Make sure you’re confident you can climb back up because there is no other way out and it gets cold, wet and miserable at the bottom at night.

NOTE: early in 2017 Cerro Chato was closed to hikers until further notice.  Reportedly this was a result of people using the trails to illegally access the back side of Arenal volcano to climb it. 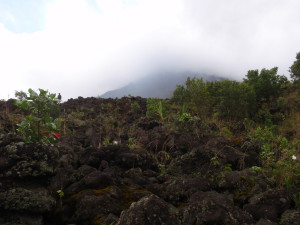 From the ranger station at the park entrance you can choose from two hiking trails one that lead east 0.8 miles to a mirador, a look-out point or Las Coladas trail east another 1.7 miles (2.8 km) from the mirador turn off to the southern most lava flows. These southern flows can also be reached on Los Tucanes trail that begins just after the second ford of the Río Agua Caliente on the road to Arenal Observatory lodge.

There is also a short trail 0.7 miles (1.2 km) from near the visitors center west of the entrance. Los Miradors trail leads through forested areas to the shore of lake Arenal.

There are trail heads at the Arenal Observatory lodge as well. The lava trail leads first down towards the Los Tucanes trail and then a tough climb back to the lodge (2.4 miles, 4 km). The Laguna Volcán Chato trail leads up to the water filled extinct crater of volcano Chato. The lodge charges about $15 for a day pass on the trails.

An old road/trail leads around the south side of Lake Arenal to Rio Chiquto then turns up to Monteverde.  Several companies offer horseback rides, bicycling (your luggage is transferred separately) or boat trips to Rio Chiquito where you transfer to a minibus for the last jolting hour up into the cloud forest. 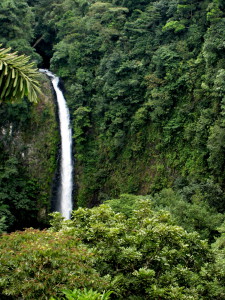 Cataratas Fortuna—This beautiful waterfall set in the rainforest near the edge of Arenal Volcano National Park is managed by a local community development group (Asociación de Desarollo de Fortuna) who charge about $20 for entry. A one hour walk from downtown Fortuna (5 km, 3 miles), or you can drive the first 3 km, or rent horses in Fortuna. The slippery trail hike down the canyon has been replaced with metal steps and at the end you are rewarded with a natural pool under the falls perfect for a dip on a hot day.

One of the most spectacular falls in Costa Rica is in the Children’s eternal rainforest about 2km hike from the Pocosol Station (to  drive there head to San Ramon on the Tigra road then turn west up the Río Peñas Blancas valley at San Isidro).

There’s a little known free public hot spring in Arenal National park located on the Río Agua Caliente.  The river’s name is a bit misleading because we’ve never found it to be more than lukewarm, but if you walk upstream about 100 meters on the left bank after the bridge on the gravel road to Castillo there are a couple of spots where hot water bubbles up.  Locals have piled rocks over the years to create little pools and you can move the rocks to allow more river water in to modulate the temperature.

Outside the park there’s been an explosion of hot water parks pumping from wells drilled into an underground volcanically heated aquifer just north of La Fortuna.  Ten years ago there were a couple of modest pools but now it looks like a Texas tornado dropped Water World in the middle of a pasture.  There are now almost a dozen hot water based theme parks (“family” “romance” or “partying”) many with associated resort hotels. 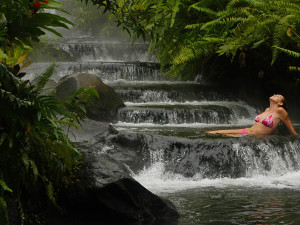 The hot water Río Tabacón feeds the upscale Balneario Tabacón Gran Thermae Spa – the original and most prestigious of the thermal pools.  Most of the surrounding land is owned by the resort so this area hasn’t seen the huge development like the region closer to Fortuna.  Costs vary from $60 to several hundred bucks for a visit depending on the package.  The original offers natural mineral pools at varying temperatures, swim up bars and a hot waterfall set in tropical gardens. Massages, hot rocks, waterjets, vegetable and salt rubs and volcanic mud packs are available to round out your relaxation. There are a Tico/continental restaurant and two dry land bars.

or see when to visit

Use the drop down menu to select any month of the year for a summary of the typical rainfall and weather patterns.
Nearly 16 feet (5,000 mm) of rain falls on parts of Arenal yearly. Expect rain at any time of the year, but the wettest months are June through October, and the driest are February through April, and occasionally November. Yearly average temperature, 75 °F (22°C). As you climb the slopes of the volcano, the temperatures drop and the rainfall increases.

Click the image above to go to the attachment page where you can choose either a large jpg version or the full resolution printable PDF map download of Arenal & La Fortuna compliments of Costa Rica Guide and Toucan Maps Inc.