If you’re shopping for travel on the internet you should check the company’s ratings with the Better Business Bureau (BBB), ICT, and Canatur before sending any money.  Nearly all of the travel service companies, tour companies, hotels and lodges are honest and legitimate but it is careless to just assume.

Please look them up.

Many countries charge visitors an “exit tax” but for many years Costa Rica was unique because instead of lumping departure tax together will all the other taxes included in airfares they required in person payments at a bank counter in the airport.

Now most airlines do include the departure tax but con artists are taking advantage of all the old information on the internet that says you have to pay in person to defraud travelers.

Scammers in official looking uniforms offer to help with airport check-in and mention the tax requirement.  They convince harried travelers who’ve vaguely heard of the old system that they need to pay, take them to an unused counter in the terminal, provide fake forms to fill out and take their money.

Due to some political and economic finagling the colón lost nearly 10% of its value.  Since then it’s declined further to around ¢610 to one U.S. dollar which makes it extremely easy for unscrupulous business owners to take advantage of unwary tourists.  Using the old “easy” exchange rate adds about 10% to their profit margin.

This is why in our guidelines for getting and spending money in Costa Rica we strongly recommend paying for things in the posted currency (eg. if the menu is in $ pay in dollars and if it’s in ¢ pay in colones).

If the exchange rate applied seems unfair ask to see where it is posted and if it’s not they’ll generally agree to give the going rate published in the newspaper or on any banking website.

At the Gas Station 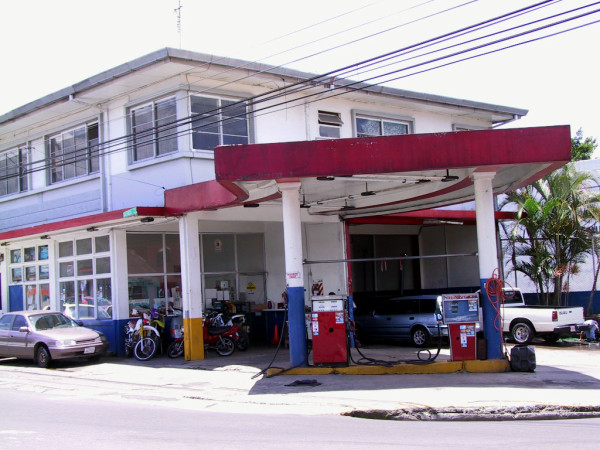 In 2014 one of the major newspapers did an informal study and found that they got ripped off one way or anther on almost 7 out of 10 fill-ups.  There is no self-service in Costa Rica so you’re a bit at the mercy of the attendant.

The most common method is to start the pump without zeroing it.  Check to make sure the colones and liters both read zero before they put the nozzle in your tank.

Other common scams were incorrect change, watered down gas and simply charging more on the credit card than the amount of the purchase.

Most of the cons against tourists in Costa Rica are very small scale.  We had a waiter at a restaurant called the Happy Snapper in Brasilito who must have thought we were fresh off the plane.  We ordered a couple of Ahi Tuna sandwiches and “dos vasos de agua” for lunch.

A few minutes later he stepped back to the table while opening bottled water with a flourish.  In Costa Rica a glass of water means tap water and you must explicitly order bottled water.  I would have given him the benefit of the doubt that he made a mistake on the order, but I noticed there were small floaters in the bottle…they hadn’t even washed it well before refilling it with tap water.  Normally bottled water is brought to the table sealed… his big show of opening it was to try to convince us it had been.

I still wanted to hope it was somehow an honest mistake but when our sandwiches arrived there was no bread or bun.  It made sense when the bill arrived and there were two Ahi Tuna “dinners” listed for twice the price of the sandwiches we ordered.  All in all it would have been a $20 scam.

I spoke with the owner who straightened it out but the restaurant went out of business a couple of months later so maybe they were pulling the same sort of crap on other diners.

Other little scams you might see are rounding “errors” or incorrect change.  These are frequently honest mistakes so don’t explode into a rage if you think you’ve been overcharged.  Just point out the error and ask that it be corrected.