It took twenty years of trying but I finally visited La Amistad in a big way as a 50th birthday trip in 2012.  We hiked all the way across Costa Rica starting at Puerto Viejo on the Caribbean and ending at Playa Hermosa near Uvita on the Pacific.  The whole story is here and it was Awesome! 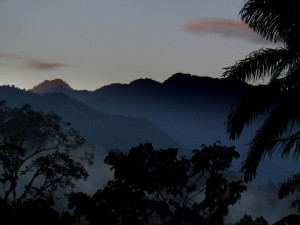 La Amistad extends past the international frontier into Panama, it is the largest protected region in Costa Rica, has more virgin forest than all of the other parks, and it has been estimated that about two-thirds of the total species found in Costa Rica live here.

Hikers and backpackers will be rewarded with glimpses of Baird’s tapirs, giant anteaters, all six species of neotropical cats – jaguar, puma, ocelot, margay, oncilla and jaguarundi as well as monkeys, coatis, over 600 bird species, 115 species of fish, and almost 300 reptile and amphibian species. If you are interested in insects or plants there is no point in even trying to provide a number to represent their diversity because new species are being discovered at such an amazing rate. 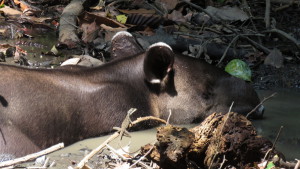 La Amistad is the largest most remote National Park in Costa Rica. It is nearly surrounded by other parks and reserves for the indigenous Chirripó, Tayni, Telire, Talamanca, Ujarras, Salitre and Abagra peoples. It protects widely diverse habitats, from tropical lowland rainforest, to cloud forests and the northernmost occurrence of the tundra-like páramo ecosystem in the world. Much of the park has never been explored, and it would be ill advised to venture very far beyond its boundaries without an experienced guide.

Getting to La Amistad Park

There are no paved roads into the park. Access is generally by horse or foot from one of the four Puestos (outposts/entrance stations) on the Pacific side of the Talamanca Cordillera (4WD required to reach each of them). Estación Altimira is the park headquarters, and is located 12 miles (20 km) north of Guácimo. Other entrances are from Estación Tres Colinas at Helechales, and in the Las Tablas region, Estación Pittier at Progresso, and Estación La Escuadra northeast of Santa Elena.

It takes two to three days on foot to reach La Amistad from the end of the nearest 4WD road on the Caribbean coast.

Take the Pan American Highway East out of San José, the road curves South and changes designation from Highway 1 to Highway 2, although it’s still the Pan American Highway. About 30 miles (50 km) past Cartago you climb over Cerro de la Muerte, which isn’t called the mountain of the dead because of all the head on bus collisions there, but it could be (the name actually originated from all of the people who died walking over the pass before the road was much more than a trail).

It’s not advisable to drive in Costa Rica at night, but especially not here. You will reach San Isidro el General after a total of 92 miles (153 km, approx. 3 1/2 hours). From here on La Amistad is on your left hand side 15 miles (25 km) away until you reach the Panamanian border. There are several entrance stations.

The four Puestos on the Pacific side Estación Altimira, Estación Tres Colinas, Estación Pittier, and Estación La Escuadra are described above.

The park is so immense that weather varies widely and it’s difficult to make generalizations. The lower elevations of the Caribbean side are extremely wet, hot and humid. However access is typically from the Pacific side where the elevations are higher, and the weather is usually cool and damp near the entrance stations, and cools considerably as you climb. Average temperatures of around 79 °F (26 °C) are common on the lower east slopes but below freezing nights occur on the peaks and ridges. The driest months are February and March.

Each month of the year is selectable on the drop down menu for a summary of the typical weather patterns and other info to help you decide if it’s the best time to visit.

The largest park in Costa Rica protecting an immense 479,000 acres (194,000 hectares, 750 square miles, 570 times the size of central park NYC, almost twice the size of Rocky Mountain National Park Colorado) just on the northern side of the border. Elevations range from 145 to 3549 meters (476 to 11644 feet) and the habitats represented here are cloud forest, rainy páramo, tropical rainforest-lowland, and tropical rainforest-upland.

The trails in La Amistad are generally unmarked and often overgrown or nearly abandoned. Camping is allowed at Estación Altimira which has restroom and shower facilities, and Estación Las Tablas which has no facilities and is about a six mile (10 km) hike from Estación Pittier.

There is no lodging in the interior of La Amistad Park.

Common animals:
Almost two-thirds of the species found in Costa Rica are found within the boundaries of La Amistad. More than 260 species of reptiles and amphibians, 400 species of birds, 100 species of fish, and the largest populations of jaguars in Central America.

A few highlights are shown below.