The midnight solitude and tranquility of blue and green sparkles in phosphorescent waves echoing the billions of brilliant stars in the milky way above is stupefyingly beautiful.  The sun at mid-day is searing but once it rained so hard I thought I might drown…standing up…on a rock.

If you really want to experience Costa Rica all the way, here are the best places to camp out.

Camping in Costa Rica conjures visions of idling the days away surfing, fishing from the rocks and swimming in the ocean until it’s time to crack open a frosty beer and fire up the grill then retire for the night to a hammock strung between two coconut palms.

You can do that!

…and you can upgrade to more comfort with the recent appearance of tent top 4WDs and camper vans for rent.   By far the most popular destinations for self contained campers are beaches like Cabo Matapalo (pictured above) where there’s no electricity, running water or crowds.

Unlike the U.S. where the “no parking tow away zone” signs now extend in a fifty mile radius around popular tourist destinations #vanlife has not caught on in a big way in Costa Rica.  It’s pretty easy to find locations to simply pull over and stealth camp.

A few of the national parks have campgrounds and especially in the dry season in Guanacaste it can be a great way to spend some time inside the park after everyone else has headed back to the resorts.

The only thing that’s “camping” about glamping in luxury tents is the canvas walls.

Costa Rica law prohibits constructing permanent buildings for 1/8th of a mile (200 meters) inland from the high tide mark.  While resorts and international developers are sometimes granted waivers there are many pristine beaches where only temporary structures like tents are allowed.

One of the best is La Leona Ecolodge on the border of Corcovado National Park.  Truly remote, guest walk west half an hour along the beach from the airstrip at the end of the 4WD road.  The surrounding rainforest is bursting with wildlife and there are hiking trails to a mirador and the Carate waterfall.  The tents are luxurious with private bathrooms, king size beds and private terraces.

Another favorite we’ve returned to year after year is the Rafiki African safari style tent lodge on the banks of the Savegre river.  It’s tough to drag yourself away from the fantastic food, excellent bar and incredible views over the river and lagoon but it’s well worth it to hike in the rainforest, rappel the waterfalls in the canyon opposite or spend a day rafting. Not only is the river the most pristine in Costa Rica it’s rated number one for easy white water. 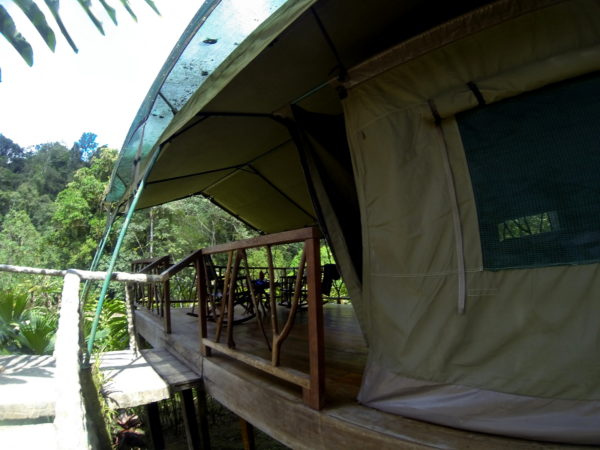 If you float out of the mountains and switch to ocean kayaks you can paddle through the mangrove estuary to playa Matapalo and the Rafiki beach tent camp.

In and around tourist attractions it can be impossible to find free campsites or “boondocking” opportunities.  They’re crowded and most of the land is developed or protected.

But popular beaches like Manuel Antonio, Tamarindo, and Jacó plus some of the better known inland destinations like Arenal Volcano do have private campgrounds.

The simplest may be nothing more than a flat spot with an outhouse.  While they never reach the extremes of service and amenities of their northern counterparts many add running water (central only, rarely hookups), kitchen facilities, showers, lockers/strongboxes, security fencing and a few even have electricity available.  Some also rent tents.

RV sewer dump stations to empty black water tanks are non-existent.  People we know who’ve driven RVs say they do not use the toilets.

Private camps are usually pretty social places because everyone is sharing the same space and they often have volleyball nets or a little cancha de futbal.  You may be able to rent or borrow snorkeling gear, boogie boards and other location appropriate equipment.

We don’t have a list of favorites because 1) we’ve never stayed at one, and 2) they often disappear after a single season.  Because of that finding private campgrounds in Costa Rica can be a bit challenging but of course there’s an app for that.

More common than campgrounds are budget lodgings that allow campers to park for a few bucks.  It might be little more than a parking space or they may run an extension cord and hose out to a grassy lawn and give you the keys to the swimming pool, restrooms and showers.

There are a number of WalMart stores in Costa Rica. Their parking lots are widely known as safe, clean, free places for RVs to overnight in the U.S. but there’s no official policy in Costa Rica.

If you enjoy backpacking there are some excellent treks in Costa Rica. We’ve trekked hundreds of miles around and across Costa Rica for some of the best adventures of our lives. 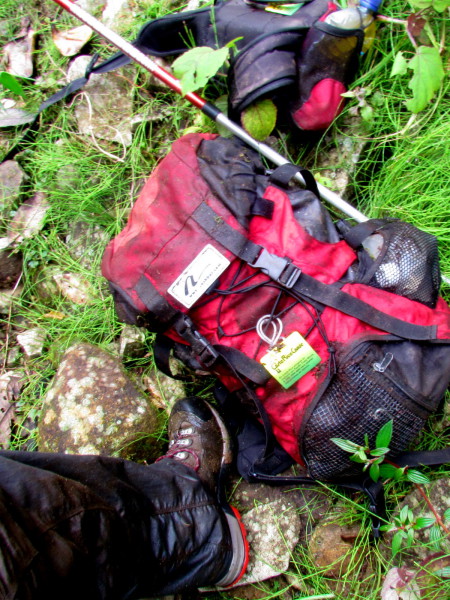 There are three possible routes in or near Corcovado National Park on the Osa peninsula. The best known is across from La Palma to Sirenna via Los Patos then south along the coast to Madrigal. Another trans-peninsular route is the sendero de oro from Dos Brazos to Carate and finally you can hike from Drake to San Pedrillo on the western edge of the peninsula. Park regulations require everyone to be accompanied by a registered guide.

Cerro Chirripó is the highest peak in Costa Rica and by far the most popular trekking route in the mountains. Strictly speaking there’s no camping allowed in the national park but the stone walled refugio where hikers spend the night is rustic.

For the truly adventurous the transcontinental trail across the Talamancas from the Caribbean coast to the Pacific was one of my favorite adventures ever (see how to trek it). Be ready for wet, muddy and buggy.

Over the dozens of wilderness trips we’ve taken we’ve assembled list of gear for camping in the tropical back country, a great first aid kit, and the transcontinental checklist.

One of the biggest challenges we’ve encountered when backpacking has been camp stoves. All fuels are prohibited on airlines and nearly no fuel is available in Costa Rica. Propane/Butane canister stoves would be perfect except the gas is nearly impossible to get in Costa Rica. Unleaded gasoline works in the whisperlight international (our go to elsewhere in the world) but the refineries in Costa Rica are low quality and even specifically designed stoves clog in under an hour. White gas (Coleman fuel) is not available.

The best solution we’ve found is methanol or denatured alcohol burners like the Solo. 100% Alcohol is available in hardware stores (ferreterias) and pharmacies (farmacias).

Listed as one of the top phone apps for Costa Rica travel, IOverlander is available for free on android and apple has locations, descriptions and camper comments for dozens more campsites and overnight parking spots.