Toucans are among the cutest vicious killers in the world.  Yup.  That colorful little guy on the Froot Loops box is really a cold blooded assassin.

Chestnut Mandible Toucans calling from a tree above Jaco Beach Costa Rica. Their distinctive echoing chirp can be heard long before the birds are spotted.

While fruit is a staple of their diet they actively hunt other animals including tarantulas, lizards and other birds – especially eggs and hatchlings from nests.

When we visited the Osa Wildlife rescue we heard a tale (backed up by a scar) of a toucan actually attacking a human.  Plummeting like a missile from a branch leading with it’s spear like beak the volunteer said the bird was targeting his eye intentionally to try to get the tray of fruit he was delivering from the kitchen to one of the wildlife rehab enclosures.

They are known to attack their own kind as well.  Chestnut-mandibled (Ramphastos ambiguus swainsonii – a subspecies of the yellow-throated) toucans are considerably larger than their cousins the Keel-billed (Ramphastos sulfuratos – froot loops toucan) and will follow their calls to feeding trees and drive them off to steal a meal.

There are six birds in Costa Rica that have the unmistakable outline of a toucan with the dramatic bill projecting far out in front though technically two of them are toucanets, and two others aracaris.

The Toucans of Costa Rica

In English the Chestnut-mandibled toucan has more names than we can keep track of it may also be called the black-billed, Swainson’s, or Yellow-fronted toucan. The latin name is Ramphastos ambiguus swainsonii and in Spanish they are always known as Dios-te-de (God gives you) because it sounds like that’s what the birds are saying when they call.

They nest in existing tree holes (often abandoned by woodpeckers) because their beaks are not strong enough to hammer through wood. Babies hatch just two weeks after the eggs are laid. They are mainly frugivores and will protect mini-territories consisting of a few branches in a tree where fruit is ripening. Males sometimes generously contribute their leftovers to their mates by leaving a good feeding spot when she arrives.

They are also opportunistic and will eat frogs, lizards, insects, baby birds and eggs to supplement the fruits.

Yellow front or chestnut they are the largest toucan in Costa Rica and sort of bullies.  Flocks acting more like gangs will find keel-billed toucans feeding spots and drive their smaller cousins away.

The Spanish name for the keel bill is much more fun and evocative – tucán pico arcoiris – the rainbow beak toucan.

They are the clowns of the bird kingdom and can be seen playing with their food in the treetops.  Not only is it common to see them tossing a small fruit in the air and catching it themselves but they’ll also toss one up for their neighbor like teenagers with pop-corn.  They cram an extended family or small flock into one or two nest holes and are constantly tumbling and sword dueling with their oversized beaks.

Their range overlaps with the Chestnut-mandible toucan on the Caribbean side but extends into the northern Pacific as well.  The keel-billed and collared Aracari are the only toucans found on the Nicoya peninsula.

The Aracaris Living in Costa Rica

The Collard Aracari (Spanish – tucancillo ollarejo) and Fiery-billed Aracari (Spanish – tucancillo piquianaranjado) are very similar in appearance but you’ll always know which is which based on where you are.  As seen on the range map below the collard are in the Caribbean and across the north through Guanacaste and the Nicoya peninsula while their fire billed cousins stay on the south Pacific and Osa. 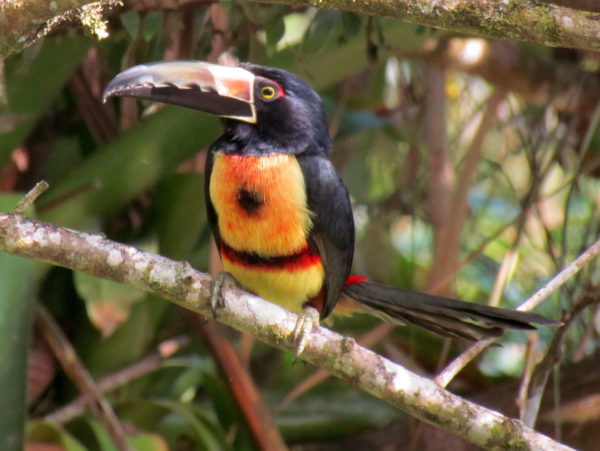 The Toucanets Native to Costa Rica

There are two toucanet species in Costa Rica and they’re much more difficult to spot than their larger and more gregarious cousins.

Our personal favorite is the emerald or blue-throated toucanet.  It could be because they hang out at higher elevations (usually above 1,000 meters, 3,300 feet) in our favorite places to hike like Monteverde, San Gerardo and Chirripo.  Not do they live higher than any other toucan they are also the species that appears the farthest north reaching into central Mexico.

The yellow-eared toucanet inhabits a narrow strip of low to mid elevation rain forest on the east side of the continental divide (see map). Their range extended across the Caribbean lowlands before all the forest was clear cut for pasture and pineapple plantations.

They are rare and inhabit the canopy moving into the lower branches occasionally. They avoid open areas which makes them very challenging to see especially with the severe reduction of their habitat in Costa Rica. Their call sounds like a series of rapid clicks almost as though someone was rubbing a stick across the ridges of a maraca.

They are the only members of the toucan family in Costa Rica where the females and males are obviously different in coloration.  Only the males have the “yellow ears.”

How to Find Toucans In Costa Rica?

Almost no matter where you are in Costa Rica there’s at least one species of toucan around. 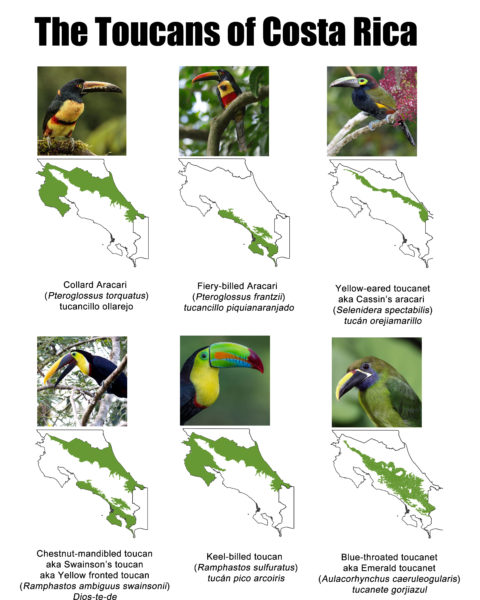 In our experience the easiest place to find toucans is in the foothills and low mountains of the central and south Pacific and Osa Peninsula where the range of the yellow-throated/chestnut toucan and fiery-billed aracari overlap.  Both are very common and especially the chestnut are very loud.  We’ve seen over a hundred of the two species combined in a couple hours of walking in the hills above Hermosa/Jacó.

Another fantastic place to see toucans is around Arenal volcano.  There aren’t nearly as many total birds as there seem to be along the central Pacific but it’s one of the few places where you can see five different species.

Keel-bills are fairly common but La Fortuna and Arenal are on the edge of the range map for chestnut-mandible toucans and blue-throated (emerald) toucanets and smack in the middle of the best places to see collard-aracaris and yellow-eared toucanets.  Only the  Fiery-bill is missing.

Although it’s one of the best places don’t hold your breath for a toucan pentathlon because the yellow-eared toucanet is still definitely the hardest of all to see.  We’ve spotted one in 25 years.
Yellow-eared toucanet, aka Cassin’s aracari (Selenidera spectabilis) tucán orejiamarillo

I always use Toucan Sam to help people picture the Keel Billed species, “you know, the Froot Loops Toucan” and when I automatically typed “Froot” it looked weird so I googled it.  Sure enough, it’s “oot” not “uit” probably because they contain zero fruit.

Wikipedia told me all sorts of things I couldn’t have known when I was a kid listening to Mel Blanc (him I knew from Bugs Bunny and Porky Pig fame) give him voice “Follow my nose! It always knows!” I remember debating my brothers and sister about the flavors and whether the red ones tasted like cherry or strawberry.  It was obvious that orange was orange and yellow was lemon (green, blue and purple weren’t added for another 30 years in the ’90s).