Camping in Costa Rica is a great way to get to out of the way places, and experience the fascinating night and very early morning hours in the tropical forests.

Twenty years ago, camping was permitted or at least tolerated on most of Costa Rica’s beaches. It was also relatively easy to find a spot far enough off the beaten path that you didn’t have to worry much about someone happening by and cleaning out your tent while you were out for a swim.

Why Camp in Costa Rica?

For us the best reason to choose a tent or van over a hotel or resort is to reach places where there’s no development, escape the crowds and have a unique experience.

Especially as we’ve gotten older we understand there’s a price to pay in the currency of bug bites, sun burn and lumpy sleeping pads but the rewards are worth it.  Falling asleep to the patter of rain and waking up to the sound of the waves and the birds keeps us setting up camp.

We frequently hear people imagining they can camp to save money.  While that may be a great strategy in Europe or the U.S. it’s marginal at best in Costa Rica.  Budget lodgings may be a better choice.

How to Camp in Costa Rica?

Recently “campers” have appeared for rent in Costa Rica and they range from Toyota 4 Runners with a tepui style rooftop tent to small fully equipped vans. 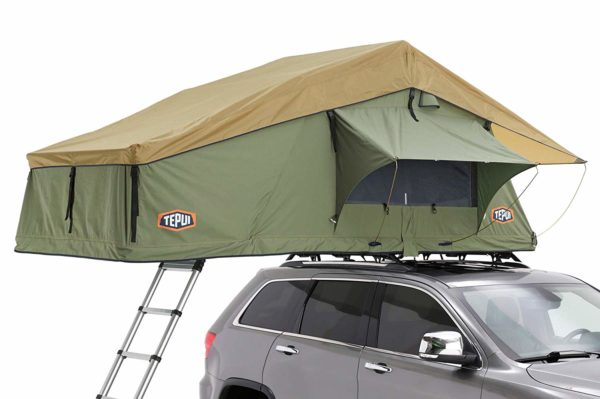 The outfits like Nomad America that rent the vehicles offer packages of camping equipment like stoves, dishes, water tanks, sleeping bags, additional tents (to set up on the ground for more people).  These rigs are ideal for exploring some of the National Parks (see list where camping is allowed) and remote beaches as a base of operations in the wilderness.

Full size RVs are not available in Costa Rica.

As long as you’re not too picky or demanding it’s pretty easy and cheap to buy camping basics in Costa Rican supermarkets.  Yes, I said supermarkets.  Around the popular beach destinations you can pick up a stove, tarp, grill, blankets, or even a tent while stocking up on chips, beer and sandwich fixings.

If you’re planning to trek into the wilderness it’s probably a good idea to bring your own gear because what’s available in Costa Rica is cheap, heavy, breakable and unreliable.  Quality gear is sparingly available at astronomical prices in a few specialty shops around San José.

Camping on a Budget?

If you’re trying to stretch your budget camping may not be the best way to save money.  Camper van or tent top 4WD rentals are typically about $100 per day or double the cost of a standard vehicle. Private campgrounds charge around $10 per person or $15-$25 per site.

At national parks fees range from $10 to $18 per person for entry per day plus $8 to $15 per person for camping per night.  For a couple that could be as much as $102 fees for one night (two days entry fees plus the camping fee) in addition to the camper rental.

If you’re roughing it in your own tent or parking the camper in an unimproved free spot on the beach you may save a bit compared to a dorm bed at $8-$15 or a clean simple cabina around $40 for a double room with private bath.

If you can squeeze the extra few bucks out of your budget it’s nice to have lights, screens, hammocks on the lawn, not having to try to dry your tent out before packing it, bathrooms you don’t have to put your shoes on to get to…