The washboard frequency was perfectly inharmonious at any but a breakneck pace and we knew we had a full day of riding across Palo Verde National Park ahead of us so we jolted down the dusty road relaxing as best we could on our way from Cañas to Bebedero.

Bebedero is a typical Costa Rican agricultural town far from the tourist trail and we returned smiles and waves towards the curious stares as was our habit.  In the center of town we stopped short when we saw the ten foot chain link fence on the far side of the bridge over the wide deep Río Bebedero.

Over the River and Through the Woods

We approached the gate at the end of the bridge and a gentleman in a stiffly starched uniform came out of the small house on the other side and greeted us through the barrier.  I asked the obvious question, “Can we come through?” and he gave the obvious answer.  I asked if there might be a fee for entry – a polite way of offering a bribe-and he politely told me no.

He told us that he couldn’t let us through the gate to the road through the rice fields beyond because that was his job, it was a good job and he couldn’t afford to risk it, but if we could find another way to the far bank it wasn’t his job to chase us off or report us.  The whole time he was rolling his eyes and jerking his head to the side almost frantically as if he wanted us to jump off the bridge.

We knew he was trying to tell us something but our Spanish wasn’t good enough to interpret innuendo.  We had just started discussing hiring a boat when a string of fish landed at our feet followed shortly by half-a-dozen figures carrying poles clambering out of the mud on the bank and over the bridge curb to come up on our side of the fence.  The gate-keeper flashed us a huge grin, jerked his head once more and said “bueno, bueno.”  He did want us to jump off the bridge.

Talking with the fishermen just returned from their morning’s excursion we learned that the land behind the gate was a large commercial rice farm owned or managed by the gregarious John’s family (the young man we’d met in Cañas the previous day and who’d directed us to this entrance). Of course he’d had no idea that some people weren’t allowed through the gate.

A couple of the fishermen helped us lift our bikes off the bridge and onto the muddy trail below and pointed us in the right direction. With a final wave to the gatekeeper we headed out.  The road improved markedly once we entered the commercial fields, but we had to stop frequently either to choose a turn on the maze through the rice fields and marshes or to marvel at the birds in the few isolated remaining trees.  Roseate spoonbills (Ajaia ajaia) and egrets covered some roosts so thickly that from a distance it appeared that the trees were in flower.

The Backdoor to Palo Verde

By late morning we’d made our way to the park border mostly by dead reckoning our position relative to the Río Bebedero as we zigged and zagged on the rectilinear agricultural grid. We uncovered a small M.I.N.A.E. sign proclaiming “Limite Parque Nacional Palo Verde” next to a track disappearing under an impenetrable tangle of green.

Since it’s nearly impossible to simultaneously wield a machete and steer a bicycle it was fortunate that the wall of green was a typical gallery effect. Once we entered the shade of the forest canopy the understory thinned and the trail was relatively clear if obviously little used.  Soon we were congratulating ourselves on navigating our way to the back door while we enjoyed the abundant birds and reptiles in one of the rarest old growth forests in the world, the tropical dry forest. 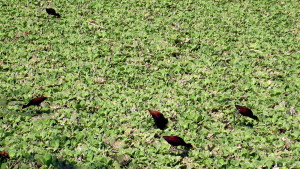 After several kilometers of easy riding along level almost gravelly trail my front tire suddenly lifted a slab of mud like a folded Sicilian pizza from the seemingly flat solid trail.  The clay jammed into my forks and brakes locking the wheel almost launching me over the handlebars.  It was obvious we couldn’t ride ahead on the trail and standing water on both sides made it clear we weren’t going there.

One Twentieth of a Mile Per Hour

It took over an hour to make the two round trips necessary to carry first our panniers then our bikes across two hundred meters of clay mud.  Sinking in to mid-calf, every step was like the Olympic high hurdles in slow motion.  The mud suction was so strong in places we had to lay down our loads and grab behind the knee of the leg we were trying to lift and pull up with our arms as well.

Only when we were reattaching our panniers on the far side of the quagmire did it occur to us that we still had over ten kilometers to travel and we might hit another dozen or more stretches of this heinous muck.  It was late enough in the afternoon that it was unlikely that we would make it back to Bebedero before dark even if we decided to retreat immediately.

I’m not sure exactly what geological and climatological circumstances conspired to create the mud trap, but we’ve never seen anything like it since and the remainder of our ride to the Palo Verde ranger station was uneventful.

The rangers and researchers were kind enough to share their showers with us-the ones in the camping area (in the background of the photo) served as habitat for roosting bats and spiders whose legs would have reached past the ends of my fingers had I been in the mood to let one sit in my palm.

The old private bridge we crossed collapsed and there is a new public bridge a couple of km upstream.  We’ve been back on the back road twice since we biked it and it hasn’t changed much.