Pursuant to Costa Rica’s Articulo 116 de la Ley de Conservación de Vida Silvestre N.7317 the minimum fine for feeding crocodiles by hand is $100… if they can locate your hand as evidence to prove your guilt. 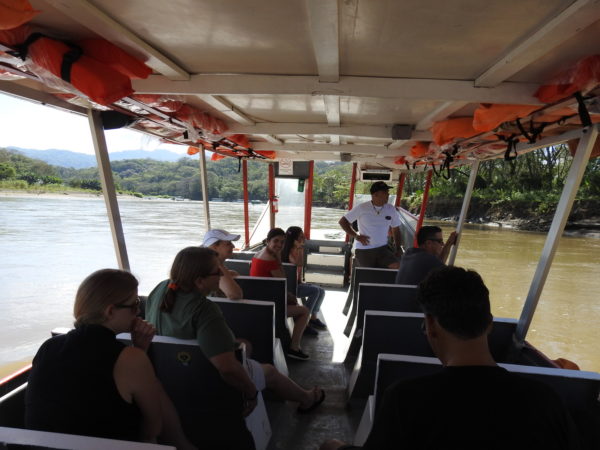 Although guides are rarely eaten sometimes other people are.  The most frequent victims of Crocodile attacks in Costa Rica are fishermen and specifically hand net shrimp fishermen who wade the shallows at night.

In the past few years there have been a handful of attacks on tourists and one death when a surfer was attacked off the popular beach at Tamarindo.  There has also been an increase of sightings offshore and even on other beaches including Dominical, Esterillos and near Puerto Viejo on the Caribbean side.  Normally crocs are not found in the open ocean but in the rainy season sometimes they leave the mouths of the estuaries possibly to seek new territory.

The laws against feeding crocodiles have never been enforced but even if they were there might not be much impact.  Although it may be legitimate to claim that feeding accustoms them to humans and makes them unafraid, the more significant problem is the increasing encroachment of development on habitat and the increasing numbers and size of crocs due to protected status.

Some Days the Croc Will Eat You…

I was completely mesmerized by the frigate birds waiting for guts and bycatch from the fishing boats at the mouth of the Río Terraba. 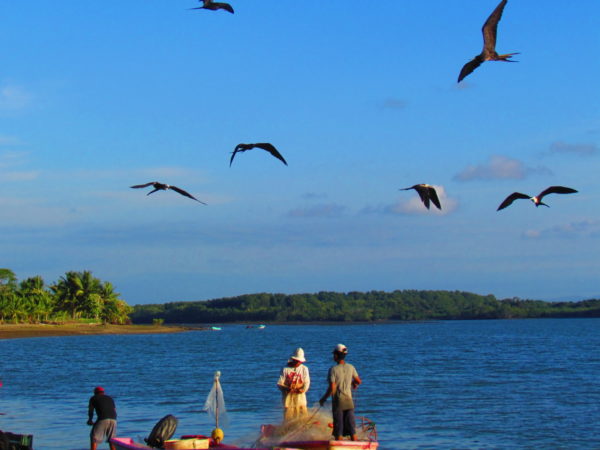 Standing at the waters edge I was staring through the viewfinder of my camera trying to time the shutter for the birds’ swoop as the fishermen tossed scraps overboard.   When I looked up in reaction to Sue’s scream I saw a pair of eyes poking out of the water about ten feet offshore.

The eyes were separated by at least a foot which equates to a twelve foot long croc. Judging from the slope of the beach he was probably about striking distance when Sue spotted him and I skedaddled away from the water.

Later when we were watching the sunset from a house high above on the ridge at Ojochal our host said there had been a couple of attacks and a death earlier that year but the fishermen stick to tradition and clean their fish at the shore.

Cramming humans and crocodiles together is problematic and currently there’s no solution.  The park service catches and moves a few of the giant reptiles each season.  However it’s difficult to find anywhere “away from civilization” and they may simply be relocating the problem.

There are hundreds if not thousands of potentially problematic crocs ever closer to a growing number of popular tourist beaches and they can’t all be moved.

Manuel Antonio is notorious for the animals getting too comfortable around humans.

Stories abound of monkeys on the beach stealing backpacks and sitting in the treetop tossing out the contents searching for Doritos.  The unfortunate tourists can only look up and hope that the little primates drop the keys to the rental car and maybe their passports before they get bored and go looking for a purse to snatch.

In 2018 Manuel Antonio began enforcing a no food in the Park policy and now all bags are searched before entry to prevent contraband bananas.

But as with the crocodiles the real problem is not the years of tourists sharing their Snickers bars, it’s the proximity of people and wildlife.

Inside the park there are no more Pizotes eating pizza but the photo of the monkeys on the breakfast table was taken at a beachfront hotel miles away.

The wildlife is even heading indoors.  At the same hotel I left the balcony where I had been bird watching to use the bathroom and when I walked back into my room there was a Capuchin monkey on top of the television reaching across towards the bowl of sugar packets next to the coffee maker.

Apparently they’ve learned to open unlocked doors.  Apparently the only thing they like better than sugar is alcohol.  They can get into the mini-bar refrigerator and bite holes in the little bottles of Stoli and they seem to know the guest gets stuck with the tab.

Of course Manuel Antonio is only the most famous example.  Significant problems with baiting for photos and garbage dumps attracting wildlife resulted in an outside food ban at Sirena Station in Corcovado.  None of Costa Rica’s national parks or wildlife refuges is immune to the problems created when people and wildlife intersect.