Politicians determined that the appearance of “large” quantities of “unnatural” food at feeders would “disrupt nature” and cause “dependence” or “population explosions” and the animals would risk starvation.

In October of 2019 an enforcement sweep at ecolodges, animal rescues and tourist attractions threatened sanctions, citations and fines forcing the removal of dozens of “illegal” bird feeders.

From the perspective of ecological science and environmental protection this was of questionable benefit.

The logo in the upper right corner of the live stream video of the tropical bird watching fruit and nectar feeder station pictured in Panama (above) says “The Cornell Lab”.  That’s short for the Cornell University Laboratory of Ornithology which is possibly the premier avian research and conservation organization in the world.

They know more about birds than just about anyone and definitely more than a bunch of politicians.  While it’s not proof of anything the fact that they endorse this feeder and live video implies to us that they believe it is harmless.

Trees in the forest explode with flowers bearing hundreds of gallons of nectar which naturally disappear almost overnight.  Others produce literally tons of fruit in brief periods.  In synchronous flowering events entire forests likes the ones at Lomas de Barbudal bloom in a single day.

Concern over a few pounds of bananas and papayas changing the ecosystem are laughable.

Is it Possible to Overdo Feeders?

Certainly.  Some attractions like Selvatura and Sky Trek in Monteverde or La Paz near Poás Volcano have hummingbird “gardens” with dozens of feeders that attract hundreds of birds. 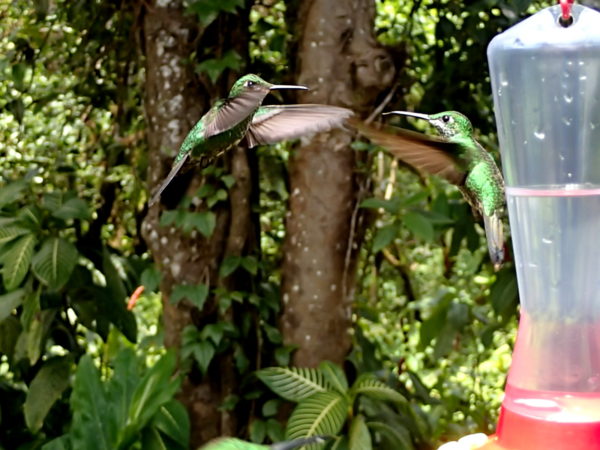 The tiny birds display their normal territorial behavior and try to stake out the high ground on the best perches in the surrounding branches.  They engage each other in aerial dogfights and occasionally the airspace gets so crowded one makes a miscalculation and smacks into another dropping to the ground unconscious.

Tourist have discovered that they can hold their finger in front of the feeder and the birds will perch on it to conserve energy while drinking.  Of course a hummingbird voluntarily landing on your hand is an irresistible selfie and visitors end up simultaneously afoul of the birdfeeder ban and the environmental ministry’s new campaign against animal selfies.

The Birds & The Bees

You might learn more than you bargained for about the birds and the bees on a visit to nectar feeders in a hummingbird garden. 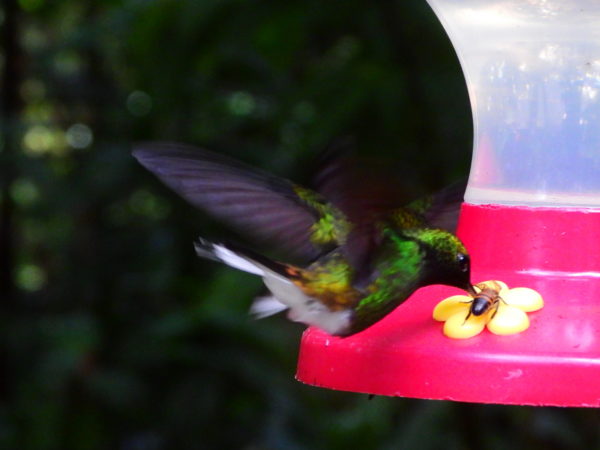 Many species other than hummingbirds like sugary water and we’ve seen kinkajou, opossums, butterflies and of course bees sipping at the feeders.  The last time we visited Monteverde it was low season and we were enjoying a hummingbird garden in lucky solitude when Sue suddenly cried out.  She’d been stung on the upper inside of her thigh.

We always have a simple syringe suction extractor in our first aid kit and it’s very effective on stings and even mosquito bites if used immediately.  You can see a little bead of venom or saliva form on the red dot of the bite and the reaction – pain, swelling and itching – can be all but eliminated. 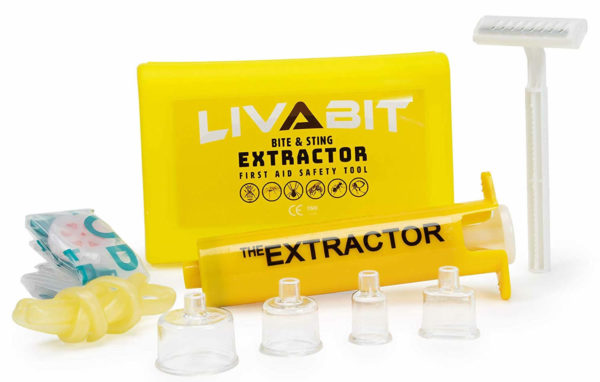 Unfortunately we’d misjudged the possibility of injury in a garden and left the first aid kit in the lodge.  As her eyes welled up from the pain I suggested the only solution I could think of and since no one was around she reluctantly agreed that she should zip off her pant leg and I should suck out the stinger and venom.

However, when I raised my head we were no longer alone.  Phone wielding Japanese school girls had appeared out of nowhere.  There was no point trying to explain so we simply collected her pant leg and headed for the parking lot.

Somewhere out there on the interweb is a video (or more likely several) complete with giggled narration in Japanese of my wife and I in what appears to be a rather compromising contortion in the cloud forest.

Costa Rica faces the difficult task of finding a balance between the costs and benefits of ecotourism which by definition occupies the interface between humans and nature.

However, banning bird feeders seems like a crass publicity stunt in the face of the reality of millions of acres of clear cut rainforest replaced with monoculture pineapples, bananas, coffee and grass.

On the other hand, it would be valuable to provide some guidance or regulation to prevent the excesses that commercial nature operations can’t seem to self regulate.

Well designed feeding stations like the one featured in the Cornell Labs live camera in Panama have greater potential for good in the form of education and engendering enthusiasm than any small negative impact.