In June of 2019 Costa Rica announced the intention to create 5 new national parks including one in the region of San Gerardo de Dota in the upper Savegre River valley.

The Savegre river is one of the most pristine in Costa Rica and one day we plan to trek from its source high on the Macizo de la Muerte to the beach at Playa Savegre where it empties into the Pacific. We’ve seen the top third (this photo essay) and the bottom third (see lower Savegre and Rafiki) but the middle is the wildest.

Waterfall hikes and bird watching are the main attractions but there’s also a zip-line in cloud forest and fly fishing for trout.

For 25 years we recommend San Gerardo de Dota as an alternative to Monteverde for viewing the famous resplendent quetzal but recently revised this.  San Gerardo is exceptional for many things and still highly recommended in general but the local lodges and bird guides have fallen into a trap of the path of least resistance when it comes to quetzals.

Large open pastures surrounded by gallery forests are easily visible from the main road and a typical quetzal tour now consists of driving along the road to join a mob of others watching as a few of the birds cross the open space predictably early each morning.

We recommend skipping the official quetzal tour and just spending a couple of days enjoying everything else the valley has to offer.  You’ll almost certainly see San Gerardo’s most famous resident while hiking to the waterfalls, discovering the paramo, on a zip-wire above the river or while sipping your morning coffee on the terrace of your lodge. 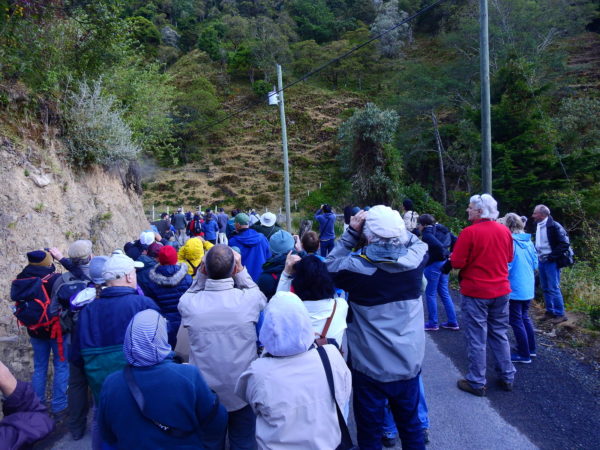 The lodge provided one guide, one spotting scope and one 10 person van for 19 clients.  Because there was no room in the van two clients volunteered to drive their rental vehicles.

A guide is required to find what you could not find on your own.  Finding the traffic jam and 120 people clogging the public road did not require a guide.

There was no organization, the ad hoc volunteer drivers did not know the routine so several tourists were quickly separated from the pack and lost in the crowd.

When the quetzals did appeared right on cue about half the people in the group had an opportunity to view them through the spotting scope.  The “guide” was so busy enforcing a five second limit at the eyepiece he neglected to show the group where to look and many people never saw the birds at all.

A couple of the lost clients from our group were “adopted” by another guide and shown where to look.

The tour not only failed to provide the three main services promised (transportation, guidance and an opportunity to view the birds if they appeared) it was further tainted by unprofessional and mostly untrue comments about the competition – running down the quality of the guides, infrastructure, and even visitors to the Monteverde Reserve.

While it is understandable that San Gerardo lodges and guides are proud of their region and the experiences it offers, it is inappropriate  to repeatedly denigrate and disparage another region in an attempt to make Dota seem superior – especially when it’s rapidly falling behind.

We have visited both Monteverde and San Gerardo dozens of times over almost three decades.  We recommend San Gerardo over 10,000 times each year on our website.   However, we will reconsider our description of Dota. “You won’t find any crowds here” is obviously no longer true.

We found a very large crowd and it was extremely poorly managed.  While there are many more total people at Monteverde they are walking and spread out in several cloud forest reserves.  The crowd in San Gerardo was standing in the middle of a public road through a pasture in a cloud of diesel smoke.

When I mentioned to the guide that restricting group size might provide a better experience he was adamant that they would just pay someone else to go and there would be a huge crowd anyway.  He could not “tell people they cannot go.”

This is absurd and completely misses the point.  Even if there are hundreds of people in the area looking for quetzals, not only can guides and lodges tell people that tours are at capacity and cannot accept more participants it is their responsibility in order to preserve the quality of the experience for other guests.

The current system follows the path of least resistance to maximum profits.  Piling everyone into a van for a ten minute drive, a few minutes on the roadside and back to the lodges in time for breakfast so they can post their “amazing” experience viewing the incredible resplendent quetzal in its “natural” cloud forest environment.

Of course each lodge only contributes a few or a few dozen visitors to the ridiculous roadside mêlée but it would behoove all of the businesses in the valley to join together and find a cooperative solution to attempt to regain some of the lost quality.

The best solution would be to discontinue the practice of roadside tours.  We saw more quetzals while hiking on the trails there and at Savegre Lodge than we did in the morning mob scene and I’m sure we would have seen even more if we’d saved our money on the “quetzal tour” and hired a guide for the hike instead.