Modern canopy tours were invented in the 1970’s when the rain and cloud forest canopies were the last remaining frontiers of botany, zoology, entomology and ecology.

Ph.D. students Donald Perry and John Williams first strapped on their rock climbing harnesses, clicked their carabineers on to a belay line, and grabbed onto their jumars to ascend a tree instead of a granite face.

Many early canopy tourers were graduate students.  They were lithe, strong, youthful and perhaps most importantly driven by the dictum that they must make a completely novel and unique contribution to science in order to earn their degrees.

I’ve known graduate students who would have climbed burning trees in the middle of a lightning storm if they believed there was a novel contribution at the top (I may have been one…).

It wasn’t long before the techniques began to improve and specialize.  Someone introduced the Tyrolean traverse (sliding along a horizontal rope) so the researchers could move between trees without returning to the ground.  The inclined Tyrolean made it much faster and more fun to get back to the ground at the end of the day.

Soon entrepreneurs saw the entertainment value and the commercial canopy tour was born. The development of new methods has continued as well, and today there are a number of different ways to explore or exhilarate in the tree-tops.

At first all canopy tours were cobbled together with climbing gear and ropes with small platforms nailed to the trunk where one could wait their turn. Now there are at least half a dozen techniques for exploration and entertainment in the tree tops.  To a certain degree equipment for commercial tours and scientific explorations diverge.

Commercial: Not all Canopy Tours are Created Equal Zip-Lines

Far and away the most popular type of tourist canopy tour is a series of traverses and slides that has little to do with exploration and everything to do with exhilaration. Steel cables, some measured in kilometers descend entire mountainsides and riders fly along at hair-raising speeds and heights where the trees look like tiny dots.  The chances of spotting any canopy residents are nil.

Sliding along cables through the treetops gives a unique perspective on the rainforest, but zip-lines like this one have become more of a thrill ride, while suspension bridges and platforms allow naturalists more time for exploration.

Some of these courses are pure adrenaline rides, but others mix in some bridges, trails, platforms and quieter traverses along with guides trained in natural history so you can do some exploration and observation of the unique treetop ecosystems in between sixty second rushes.

For the most part these tours are very safe, but you should be aware that the equipment required to put together this kind of course only costs a few hundred dollars and small ones have sprouted up everywhere.  There is no licensing or safety inspection required, but you can be certain the course you’ve chosen is safe by looking for design standards by the American Challenge Course Technologies (ACCT), and/or or voluntary certification by the ICT.

The latest innovation to hit the canopy zip is switching out the cable for a rail so the harnessed rider can plummet down stomach churning free fall drops and sling around corners in the tree tops.  El Avatar is a new ride outside Manuel Antonio National Park. 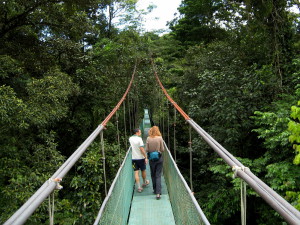 Originally the bridges used in canopy exploration were simply a pair of parallel ropes one above the other so investigators could clip their harness onto and hold one as a railing while “tight-roping” along the other.  Now they range from teetering wood slat rope bridges looking like something out of an adventure movie to steel and aluminum marvels that rival the Golden Gate in engineering if not size.

Bridges are an excellent choice for extended treks through the treetops.  If you’re a birder or simply fascinated by nature you can easily while away an entire day watching and relaxing.

The most accessible way to explore the treetops is suitable for small children and people with limited mobility or athletic ability.

The cars are more open than ski gondolas, but it’s the same basic system.  You’re accompanied by a guide who uses radio communication to get updates on what interesting wildlife is hanging out near tower seven or is headed up the trail under tower eleven.

The Gondola based operations in Costa Rica have extensive trails, educational displays and even theaters on the ground.  This is an excellent way to get an introduction to all levels of the tropical rainforest.

Still my favorite method of exploration, perhaps because in my younger days I was a climber.  Some of the more unique challenges are located on the smaller canopy tours where you can climb up the hollow inside of a strangler fig, rappel waterfalls, or soar on a Tarzan swing between times of quiet observation on platforms or horizontal traverses.

Essentially identical to the construction cranes that dot the skyline of any growing modern city they are an odd site indeed perched in the rainforest.  Instead of a load of girders, a cage filled with graduate students and instruments can be slid in and out, raised and lowered, and rotated around the central tower to give essentially unfettered access to all the volume in a cylinder of rainforest.  The ability to thoroughly cover all levels and areas makes this one of the best techniques for long term investigations.

Cables, bridges and walkways, and platforms are also still common in long term scientific research in a fixed location, but many of the other techniques developed for exploration are more suited to temporary investigations in a number of trees.

If there is a next type of canopy exploration to move into the tourist realm this has to be it.  The appeal is undeniable.  A helium filled dirigible is used to lower an inflated wagon wheel shaped platform onto a section of the canopy.  The wheel can be a hundred feet or more in diameter and the “spokes” are joined with lightweight netting that spreads the load over such a large area of treetops that the twigs barely bend.  Investigators can walk across the treetops gathering samples and data.

Economical and effective, this is just a chair suspended on the end of a long aluminum pole mounted on a fulcrum and balanced by a counterweight.  In a way it’s the poor investigators version of the construction crane, but it has the distinct advantage that it can be easily disassembled and moved to a new location in a relatively short time and by hand if necessary.

With a few tie-ins to a trunk regular old aluminum extension ladders can be stacked one on top of the other to dizzying heights.  This technique can be somewhat destructive though.  The ladders, and hands and feet on them, often dislodge bark and epiphytes along the trunk.

Usually a bow and arrow launches a lightweight monofilament line over a sturdy branch then a more substantial climbing rope can be hauled up.  This is a low impact technique because nothing is permanently attached and the epiphytes along the trunk need not be disturbed.

Little did we know, but my brother, I and the two girls from across the street were pioneers in thrill ride engineering. 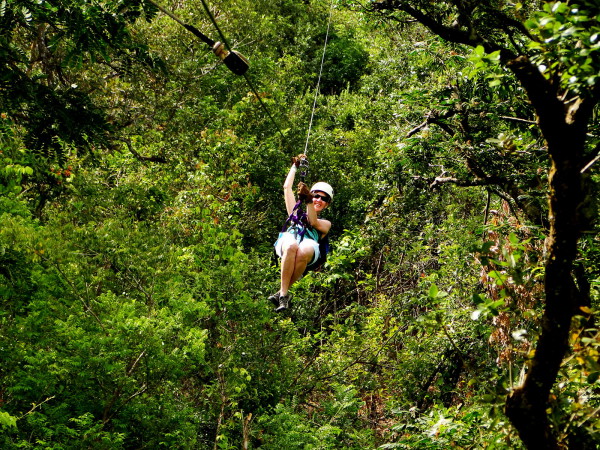 In the sixties, long before anyone in Costa Rica realized they could charge $90 a head to slide down a rope, we had a canopy zip-line in the back yard.  It ran about 100 feet from the hayloft of the old barn on the alley (leftover from the days before motorcars had become popular in our Wild West town), through the canopy of a massive black walnut and anchored on the other end to the clothes-line pole.

It wasn’t as big, or as fast as some of the modern rides, but it had elements of excitement thankfully absent from the commercial ventures.  We found that my little sister’s new plastic beaded jump rope worked perfectly to toss over, hang from and slide down the inclined line.  The little cylindrical beads rolled along like bearings and we could really fly.  Unfortunately we didn’t foresee that all that rolling and rubbing would wear on the fibers.

It was probably only a twelve or fifteen foot drop when the jump rope gave way, but that’s a long way down when you’re seven.  Fortunately seven-year olds bounce, and I’m pretty sure no one ever broke a bone.  From then until my mother caught us and threatened to kill us if we didn’t kill ourselves first, we used a doubled over length of jump rope and checked our equipment carefully before each run.  Sort of like the real tours do now…