Sometime things don’t turn out the way you planned, but fortunately in Costa Rica that often means that they turn out better. We particularly anticipated the last couple of days of one trip to Costa Rica because they coincided with the waning moon and an Arribada (mass nesting) of sea turtles. We traveled by bus to Nosara just outside Ostional National Wildlife Refuge.

Our dusk walk to the nesting sites on the beach was called off after we stumbled across a local woman lying unconscious on the trail. After obtaining medical attention and locating her family there wasn’t much enthusiasm left for a midnight turtle walk. The woman was okay and that’s a whole other story.

The next morning we walked to the beach knowing that we had to catch an afternoon bus back to the central valley and our flight home.

The Arribada was over, but there would be several hundred stragglers each night for the next few nights and we wished we could stay. It was impossible to be disappointed for long under the clear skies next to the crashing surf, and our cheered dispositions were soon rewarded.

Sue spotted a small black dot moving slowly towards the water ahead of us, and as we moved closer we realized it wasn’t one of the ubiquitous mangrove crabs, but a baby turtle.

Looking up the beach we saw dozens of tiny dots headed for the waves. For the next 15 minutes we joyously and unabashedly interfered with nature by running from the trees to the water frightening away vultures and other predators ushering all of the turtles safely into the sea.

Turtles normally hatch late on moonless nights to maximize their chance to sneak past the coyotes, vultures, and others that consider them a tasty snack. They calculate the appropriate time to emerge based on temperature variations.

After all the babies were in the relative safety of the surf we poked around the nest feeling the leathery shells and marveling that there didn’t appear to be any unhatched.

A little investigative work revealed why these turtles had come out under glare of the sun.

Their mother, like all sea turtles could smell salt and used that sense to seek out a portion of the beach with a lower concentration above all but the most extreme high tides.

She had chosen a nest site just short of the trees, which is normal, but also where a small trickle of a freshwater stream disappeared into the sand. The fresh water had cooled the nest, confusing her babies’ internal thermometers, and provided us with a once in a lifetime experience.

How to See Sea Turtles Hatching

Most turtles hatch about two months after the eggs are laid so you can use the nesting calendar to figure the best odds of seeing them come out.  It varies by species and regions so if you’re willing to travel it’s possible to see hatchlings nearly any time of the year in Costa Rica but it will take some planning and commitment.

There is no such thing as a “turtle hatching tour” because it simply happens too fast.

Turtle nesting tours rely on the fact that the mother is on the beach for a couple of hours.  Teams of spotters walk the beach looking for tracks coming out of the surf then follow then up to the high tide line and check on the progress of the nest and then radio back to the base where another guide is waiting with a group of tourists.

Responsible operators wait until the mother has started laying because it takes a great deal to divert her attention from the task at hand once she’s begun.  Approaching turtles while they’re looking for a nest site or still digging frequently frightens them into aborting and heading back to the water.

This strategy is impossible when the babies are born because once they start popping out of the nest it can easily empty in a few minutes.

Another problem is that peak hatching hours tend to be very early in the morning (2:30 a.m. to 4:30 a.m.) in contrast to nesting which may begin soon after sunset.   So a nesting tour is a nice nightcap after a late dinner but a hatching tour means getting up at 2:00 a.m and hanging out in the dark for 3-4 hours.  Most tourists aren’t that dedicated. 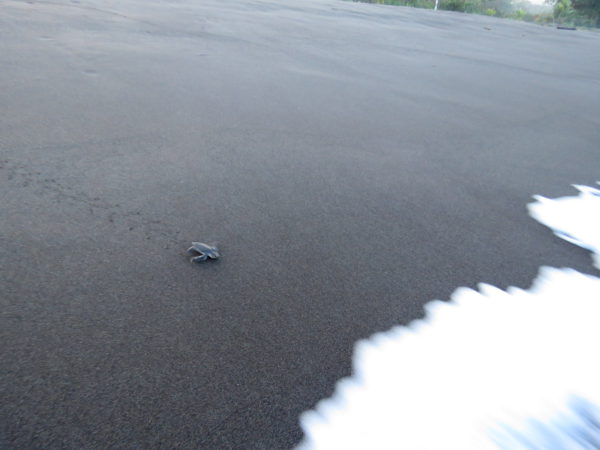 Other than just spending a lot of early morning hours on the more isolated and undeveloped beaches the best way to see turtles hatching is to contact a conservation project and ask if they have any in their incubators scheduled to emerge.  Since they know precisely when each batch of eggs were laid and know the incubation period they can usually predict within a couple of nights when they will hatch.

We’re not aware of any that have “hatching tours” per se but if you volunteer at a sea turtle conservation project for a week at the right time of year your odds are pretty good.