I lost one of the little screws that holds the trap of my bicycle pedal onto the body and stopped at a hardware store for a replacement.

It was a Japanese part with unusual threads so we had to search through a box of odds and ends to find one that matched. It was about twice as long as necessary so the shop guy offered to fix it and headed to the back with my pedal and the screw in hand while I started the paperwork.

Yes, paperwork… the traditional Tico system for purchasing something is fairly labor intensive. First someone helps you find what you need, then another looks up the official name and writes you a bill of sale, a third person fills in the price and validates the bill. Then you wait in line at the cashier where you pay, the bill is validated again and then you step back to the counter to pick up your goods and get the final stamp on your bill showing that everything (a single screw – total cost $0.03) has been delivered.

About the time my bill was being validated the second time, I noticed the youg man who was “fixing” the screw had decided that the reason it wouldn’t go into the pedal any further was that he hadn’t tried applying an 8″ bench vise and the biggest screwdriver I have ever seen. This was a BIG screwdriver. 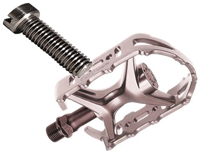 My grandfather worked on D9 Caterpillars and he had some big tools, but this thing must have been nearly a meter long. I came around the counter shouting “corte la, corte la!” (cut it, cut it!). I knew the only thing the BIG screwdriver and vise would accomplish was stripping the threads on the soft alloy of the pedal body. A one inch long screw will just not fit in a half inch deep hole no matter how big the screwdriver is.

I thought this might just be an isolated incident, but then my wife lost a screw from her sunglasses. We handed them over to the girl behind the counter at the optical shop, and sure enough after searching around for the right screw with no success she chose one with a diameter about a sixteenth of an inch bigger than the hole and got out an 8″ screwdriver. Now that’s not a BIG screwdriver when you compare it to the one in the hardware store but it was pretty surprising to see it in the hands of an optician. Unfortunately the work space was partially shielded from view and by the time we figured out what she was doing, the damage was done.

If you are observant you will see that the BIG screwdriver principle applies to wrenches, pliers, and especially hammers used for the repair of anything that is not duly impressed by the big screwdriver. I pity the homeowner with a leaky toilet…