(with apologies to Mr. Conrad)

This is the story of a heart of palm salad or a mysterious deal involving duffel bag swaps in the heart of the jungle or how we spent the first day of our honeymoon in Costa Rica twenty years ago. 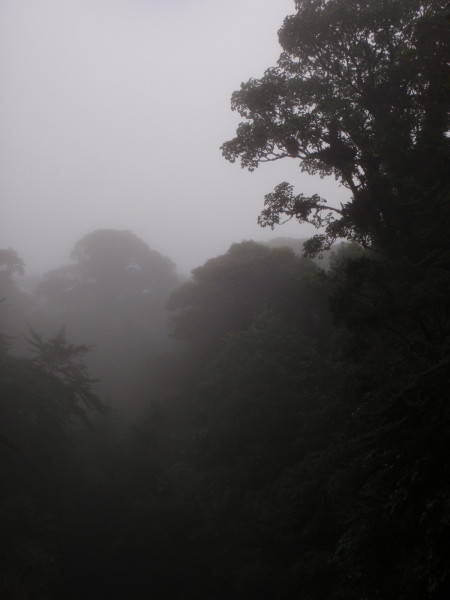 Quincho and Panama (a couple of machete wielding complete strangers) picked us up from our hotel in Heredia the next morning and we headed through the Zurqui tunnel to Braulio Carillo National Park. We stopped for breakfast at a soda where there was a terrace on stilts over a lush ravine. The views were spectacular, but we started to get a little concerned when Quincho announced that “every day’s a holiday” and the two clinked their shots of guaro together and downed them in a gulp; at 6:30 a.m. For the next hour guaro kept appearing like magic, and despite Quincho’s insistence that he would drive slowly, I made him turn over the keys. His reluctance was understandable, after all he barely knew us…

The next stop was Guácimo, where they suggested that Sue and I walk around and see the sights while they “talked to some guys.” We resisted. The sights were all obvious from our position in the center of town, and none of them seemed promising enough to deserve closer attention, but they insisted. We return to the car just in time to see them stuff a beat up duffel bag in the trunk and knew we had managed to end up in the middle of a huge drug deal before we saw a single monkey.

It only got more disconcerting. East of Guácimo we turned off the highway and were soon on a tiny track through a seemingly endless banana plantation. The drug runners boisterously slurred along with the song emanating from Panama’s boom box intermittently hollering “¡derecho, derecho, no izquierdo!” in a mad, drunken, tropical karaoke. When the “road” dead ended into the Parismina river there was a dugout canoe and boatman waiting for us.

We surprised ourselves by climbing in the canoe without anyone having to point a gun at us. I think we had visions of using as an escape vehicle when our drunken guides pitched themselves into the river and drown, while trying to board. A few km down the river where we pulled to the opposite bank, there was only the faintest trail into the jungle where a large man with the biggest machete I’d ever seen lurked in the shadows.

Warm greetings and backslaps were exchanged along with some comment from the big man about it being a bad idea for Quincho and Panama to be so obviously drunk. Of course even we knew from television it’s a good idea to have your wits about you when you’re about to exchange a duffel bag full of cash for one of coke, or vice versa. We followed very quietly down the trail.

The big man was right. We reached the small clearing, and it really hit the fan when Panama’s sister in law saw how drunk he was and that he’d smashed some of the groceries he was delivering in a beat up old duffel bag.

We abandoned our thoughts of creating weapons from pointed sticks and enjoyed the rest of the day touring the small palmito farm, playing soccer in the pasture with their boys, and eating the best tortillas and heart of palm salad ever made. Quincho took a siesta, and Panama decorated his face with ash from the cook stove because he deserved a joke being played on him if he couldn’t handle his liquor any better than that starting at sunrise.

Dedicated to the loving memory of our good friend and the original Costa Rica guide, Joseph “Quincho” Rodriguez.