A few people have asked us when we’re going to add the new multimillion dollar road from Los Chiles to the Caribbean to the the map of Costa Rica.  We tell them the same thing “when the road actually exists.”  Although the official completion of route 1856 (aka “the border road”) was announced a couple of years ago there is no navigable road.

Costa Rica brought out the bulldozers to draw a line in the mud demonstrating her territorial rights in response to Nicaragua’s dredging operations in the river. Nicaragua and Costa Rica are suing each other in the International Court of Justice try to determine which country’s environmental crimes are more egregious.

The department of transportation has officially declared that the road will never be completed because a significant portion of the funds have been stolen.  The locals are putting up gates across the few passable sections to keep motocross riders from using them as practice areas and destroying them for local use.  More in La Nacion.

The road has apparently been abandoned.  A culvert a few km from the beginning of the road at Los Chiles washed out creating a 15 foot wide channel.  Locals attempted to bridge the gap with a shipping container which also collapsed.  There are numerous similar gaps along the length of the route and as far as we know there are no plans or funding to repair any of them.

While the international court battle continues the ground war has moved back onto the riverbanks where Costa Rica is filling in channels and Nicaragua is dredging as fast as they can…both of which destroy the environment.

No Engineering Plan, No Blueprints and No Environmental Studies

In an interview during a state visit to Paris in May of 2012 the president Laura Chinchilla admitted Route 1856 (Juan Rafael Mora Porras) along the Río San Juan and Nicaraguan border is being built without blueprints.

As inconceivable as it seems in the 21st century there were no environmental impact studies; no legal wrangling for right-of-way; no economic or need based studies; no pesky engineering studies of waterways, slopes or drainage; no soil analysis for stability and erosion; and most remarkably not even a comprehensive survey to determine the route. 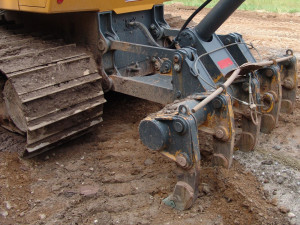 Apparently approximately 900 earth movers, dump trucks and backhoes were lined up along the banks of the Río San Juan and told to follow the river – literally bulldozing anything in the way.

What followed has been and continues to be a debacle of monumental scale.

The president of the College of Engineers and Architects of Costa Rica, Olman Vargas, predicted the lack of planning “could lead to higher costs, environmental problems and rapid deterioration of the project” which turned out to be an understatement.

In many places the road is little more than a bulldozer scar on the landscape. No crowning or shaping to allow proper drainage, no road bed or gravel, no gutters or drainage channels for the water if it should happen to run off the roadway, and no culverts or bridges to allow small streams or other watercourses to cross the road where they intersect.

A group of off-road motorcycle enthusiasts tried to tour the section of the new road that opened in March and reported that while some sections were graveled and easily passable others were giant mud bogs that required pushing, pulling and dragging to cross. They recommended 4WD, a good winch and a team of shovelers for anyone foolish enough to attempt it in a vehicle…and that was in the dry season.

In April 2012 the Costa Rican Ministry of Environment, Energy and Telecommunications (Minaet) studied the “completed” 60 km of dirt road starting near Bara del Colorado Wildlife refuge. They reported that construction had destroyed several kilometers of virgin rainforest (including highly endangered almendro trees – habitat for green macaws), caused silting and sediment runoff into tributaries and the river, polluted the ground and water with oil and other petrochemicals, and blocked the natural flow of water across the Medio Queso wetland.

The study warned that immediate action was needed to minimize the damage to Costa Rica’s reputation because as far as the environment was concerned “El daño ya estaba hecho” – “The damage was already done.”

The Costa Rican government’s study suggested some of the ongoing environmental damage could be reduced by stabilizing excavated slopes, adding drainage channels and sediment traps, re-planting trees where the forest had been cut down and adding drains or culverts to restore the movement of water in the wetlands.

However, instead of initiating a clean-up of the mess on the existing 60 km the president proudly announced with great fanfare that bulldozing had begun on a second section of the proposed 300 km dirt road – apparently again without a blueprint or environmental plan.

Costa Rica is facing legal action in the International Court of Justice for the environmental damages to the Río San Juan which is Nicaraguan territory.

Costa Rica’s own legal system is investigating the apparent embezzlement of a significant fraction of the $33 million already spent on the border road amid reports of overcharging, padding and outright theft. It may however be difficult to prove that the work was not completed to specifications when apparently there were no specifications.

The actions await judgement in the world court of public opinion while the tourist bureau continues to spend millions marketing Costa Rica as an environmentally friendly eco-wonderland.

Emergency graveling operations have begun on the segment of the new route 1856 (Juan Rafael Mora Porras) between Los Chiles and Trocha along the Nicaraguan border. The road is intermittently impassable due to deep mud and washouts.

Olman Vargas spokesman for the Association of Engineers and Architects (CFIA) stated that CONAVI’s plan to add gravel without building any drainage “makes no sense.” We agree and suspect that the border road is in imminent danger of closure for the remainder of the rainy season (best estimate – until January 2013)

The road is approximately 20% complete – from the Delta Nicaragua (Delta Costa Rica) to near Boca San Carlos as of June 1, 2012.