Columbus (Cristóbal Colón) “discovered” Costa Rica in 1502 on his last voyage to the Western Hemisphere.  He anchored in the Caribbean near the current location of Limón and sent out a landing party.  Tradition states-probably incorrectly-that Columbus christened this land Costa Rica, the “rich coast”.

While he did state that he’d seen “more signs of gold in the first two days” than in years of other explorations he referred to the area as La Huerta (The Garden).  His log books relate dense jungle and sucking swamps that hampered any inland investigation, and he returned to Spain as soon as repairs to his storm damaged ships were completed seventeen days later. He never mentioned Costa Rica, and he never returned. 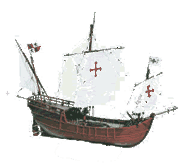 Gil Gonzálas Dávilla is a more likely source of what in the era of the conquistadors was an irresistible moniker. He employed brutal tactics to strip what little gold the Indians had scoured from the rivers of the Osa Peninsula on a bloody march from Panama to the gulf of Nicoya in 1522. After failing miserably in his mission to establish a permanent settlement, he returned home with the stolen gold and a proclamation that the area should be called the “Rich Coast” in an attempt to disguise his defeat as an auspicious exploration.

It’s easy to see why the romantic Columbus version is more popular than the brutal subjugation, theft and deception version, but the exclusion of the phrase from Cristóbal’s extensive logs seems to repudiate it.