Guanacaste is the northernmost region of Costa Rica encompassing much of the border with Nicaragua and expresses its frontier character in everyday life as well as during celebrations. 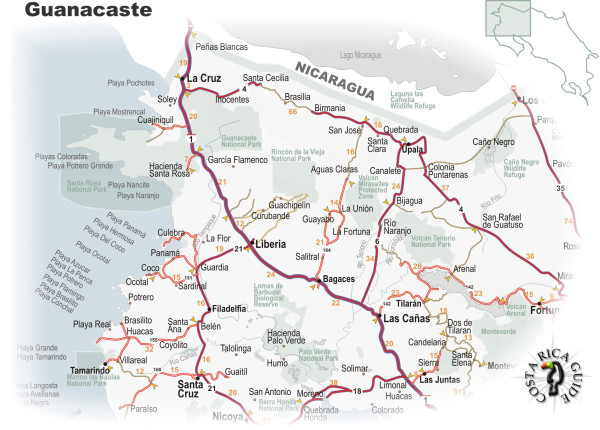 The hot relatively dry rolling hills that rise up from the unspoiled Pacific beaches climb steeply to lush green cloud forest heights on the shoulders of the string of volcanoes that make up the Cordillera Guanacaste.  The range drops equally precipitously to the east giving way first to agricultural and grass lands and then the swamps and marshes referred to as llanuras stretching along the Ríos Sarapiquí, San Juan and Colorado. 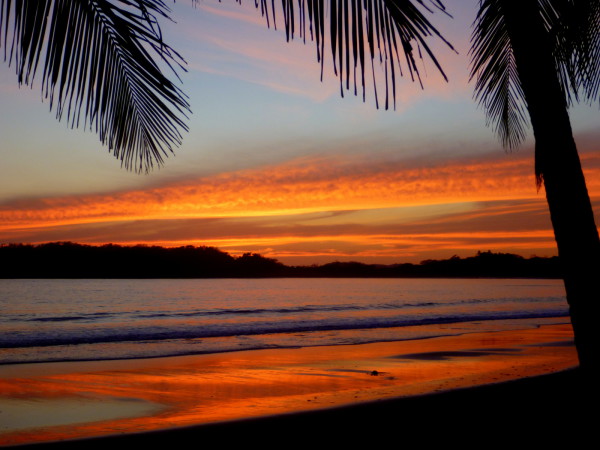 Most of the Pacific region north of the Nicoya Peninsula is protected by Santa Rosa and Guanacaste National Parks, where some tiny patches of the original tropical dry forest remain, large regions of maturing secondary forests are easily explored and deserted beaches rim it all.

The breaks at Playa Naranjo (Witch’s Rock) and the river-mouth at Bahía Potrero Grande offer the best remote surfing in the country and excellent dive locations ring the small islands off the Península de Santa Elena.  Because of the relatively dry climate the north Pacific is also one of the best choices for camping, trekking and day hikes.  Travelers who prefer not to jolt along 4WD tracks and/or walk miles of rugged trails can visit the northern shores in small boats called lanchas that depart from the resorts and hotels to the south.

The Golfo de Papagayo is what many people think of when they hear “Guanacaste.”  World class beach resorts, planned communities and smaller distinctive boutique hotels line the beaches of the gulf where the water is relatively calm.  Many visitors choose to spend their entire vacation in the northern quadrant of Costa Rica – flying into Liberia international airport (LIR) which was expanded in 2012 to accommodate sun seekers headed towards this driest region of the country. 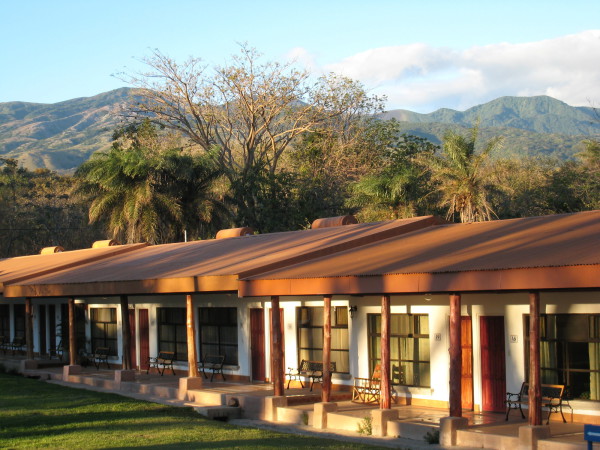 The northern backbone of the Guanacaste region is comprised of volcanoes in various stages of activity. Most are relatively dormant but still have enough fire to warm hot springs and create small fumaroles, geysers and boiling mud pots.  If you want to see fire and brimstone Arenal volcano is your destination.

In the north volcáns Orosi, Cacao, Rincón de la Vieja, Santa Maria, Miravales and Tenorio (printable map of Tenorio region) literally scrape the sky pulling out moisture and cloaking their upper slopes in some of the least visited cloud forests in Costa Rica.

In southern Guanacaste, the volcanoes give way to the mountain peaks of the Cordillera de Tilarán where the shrouds of mist create the most famous and easily accessed cloud forests in Costa Rica – Monteverde and Santa Elena (Click for details or free printable map for Monteverde).

The ranching lifestyle is apparent wherever you look and you’re still likely to see sabanero’s horses tethered in front of the local ferreteria (hardware store).  Around Christmas the small communities celebrate ‘Festivals de Patron’ or ‘Festejos Populares’ highlighting horsemen and the ranching culture.  Special foods like tamales are prepared in community kitchens and ice cream, fruit juice, pastry, and savory snack vendors line the streets for day long fairs that include dancing, traditionally costumed children, and El Tope– a parade of decorated horses with their high-stepping staccato gait and traditionally dressed riders. 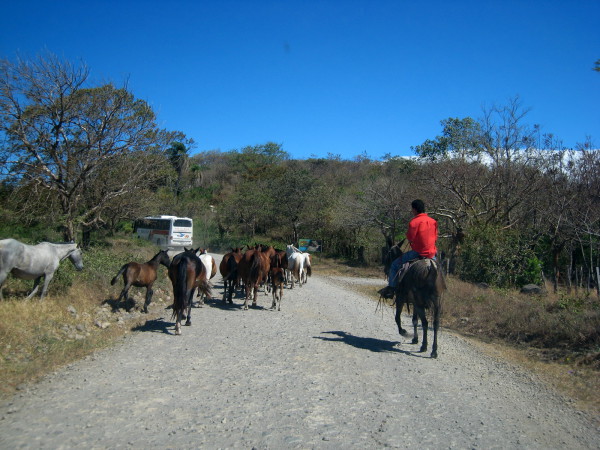 In the evening the focus shifts to the bullring where the tipico ‘bull-fights’ (las corridas) are held.  A cross between a U.S. style rodeo and the running of the bulls in Pamplona the Costa Rican version doesn’t involve blood shed.  Sometimes a rider challenges the bull and when he’s unseated the fight begins.  A toreador risks the horns with his cape in the style of the Spanish and Mexican fighters while groups of men (los toreros) stand around whooping and cheering, sometimes dashing into the path of the bull to run before it for a short distance before bailing over the wall around the arena.

Finally mounted cowboys ride in steering their mounts with their knees, hands free working a lariat to lasso the tired animal and lead it out.  Sometimes a particularly deft horseman will forgo the rope and work the bull to the gate with nothing but his horse’s footwork.

In the past couple of decades cattle have partially given way to citrus orchards and other crops, and of course tourism has become an important part of life in Guanacaste.  Many families welcome visitors who want to experience the sabanero lifestyle riding the range of a working cattle ranch.  Cattle hands that have spent their entire life in the area now double as naturalist guides on the still forested slopes of the volcanoes.  They know the best spots to see birds and other wildlife, and which hiking trails lead to the waterfalls, natural hot springs, boiling mud pots, volcanic calderas and scenic canyons.

Day-to-day life for cowboys is sedate compared to the excitement of el tope and las corridas. We once delivered supplies to a ranching outpost on the slopes of volcán Miravalles where two young Nicaraguans stood watch.  The cattle were content with the new green shoots and the boys offered to take time out from watching the grass grow to show us some of the mountainside where the forests remained.

We moved almost like monkeys, clutching lianas, vines and branches to keep from sliding down the steep slope, literally swinging when our feet lost contact with the incline.  The waterfall at the head of the valley cascaded rope-like looping and swirling as it dropped 25 meters, sometimes breaking into droplets and mist, the main stream disappearing altogether.  The water was surprisingly frigid when we stood under it to rinse off the grime of the trail before we headed back down to the ramshackle shed that served as storage for tools and equipment as well as sleeping quarters.