The Talamancas are a spectacular mountain range rising from sea level on the Caribbean to over 12,000 feet then dropping back down to the Valle General on the Pacific side.  In 2012 I crossed the Talamancas from Puerto Viejo to the Pacific coast with some friends and indigenous guides for a 50th birthday adventure and I can say for certain that even Corcovado pales in comparison. 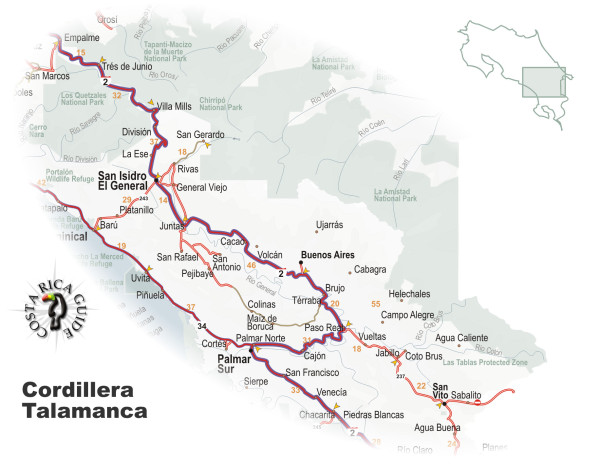 We climbed the highest peak in Costa Rica on our luna de miel (honeymoon) almost a silver anniversary ago and although we’ve been back to the trail head half a dozen times since then we’ve never made it more than half way to the top again. 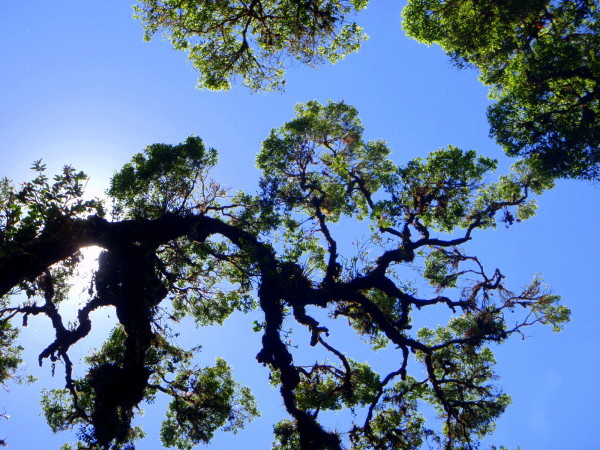 We still run up trails in the Colorado Rockies so I think we could make it easily but we keep getting distracted by how amazing everything is along the way.

The Cloud Bridge and Talamanca Forest Reserves protect some of the most beautiful cloud forests, wildlife habitat, pristine mountain rivers and waterfalls anywhere in the world as do the lower trails in the National Park.

My parents loved it (I’m not allowed to tell their ages, but you can probably guess since Sue and I are approaching a 25th anniversary and got married when we were 30).  Don’t be intimidated by the huge peaks.  Visit this area while it’s still undiscovered.

San Gerardo de Rivas is the tiny village gateway to the park and reserves.  There are half a dozen small albergues where climbers stay before tackling the peak and one nice ecolodge at Talamanca Reserve (where we stayed with my parents).

Talamanca Reserve is the only wild place in the world where I’ve thought “ATVs, that’s a good idea.  You should do more of that.”  They’ve made a small subset of their dozens of km of trails accessible to ATVs for people who couldn’t get there any other way.   They don’t promote tearing around the wilderness spewing exhaust but for guests that need some help to experience the back country they have vehicles available. 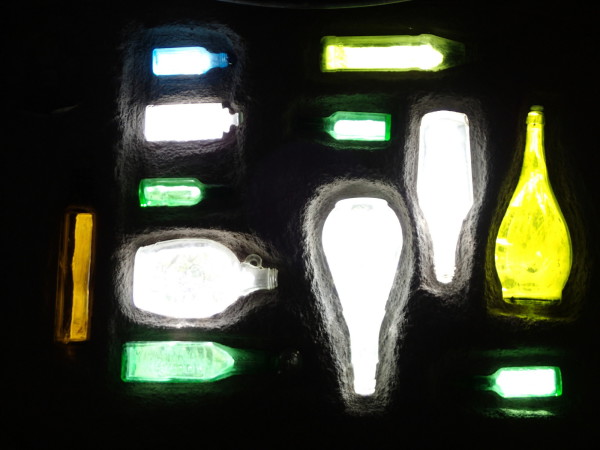 There’s also a real hidden gem here (when you look at the sun through the bottles that they embedded in the stone walls you might think it’s a real jewel). Casa Mariposa is a magical cottage with the friendliest most hospitable hosts you could ever hope for.

Very simple accommodations (think Hobbit house maybe)  perched above the river opposite the National Park trail head it earns one of our top ten (and that’s out of about 2,000 that we’ve tried) places to stay.  It’s also by far the best place to get current information on the arcane regulations and permit requirements for climbing the peak.  They know what the rangers are going to say before the rangers do. 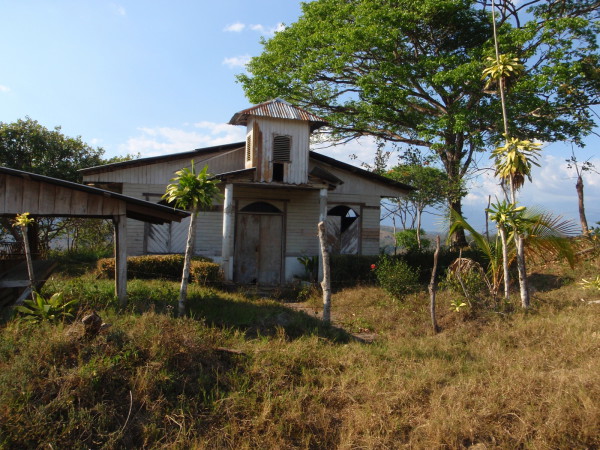 Probably the best white knuckle driving adventure we’ve ever had (because we lived to tell the tale) was when we took a casual left turn off the Pan American Highway saying “lets check out this road to Aguila.”

We bicycled the Nicoya Coast road the Chris Baker so vividly describes as his best on road off-roading adventure in The Moon Guide to Costa Rica.  that road was massively improved and they even added some bridges before we started traveling around by SUV so we never got a chance to really experience it behind the wheel.  I’d always wondered what it would be like to drive something like that.

Well we found out. 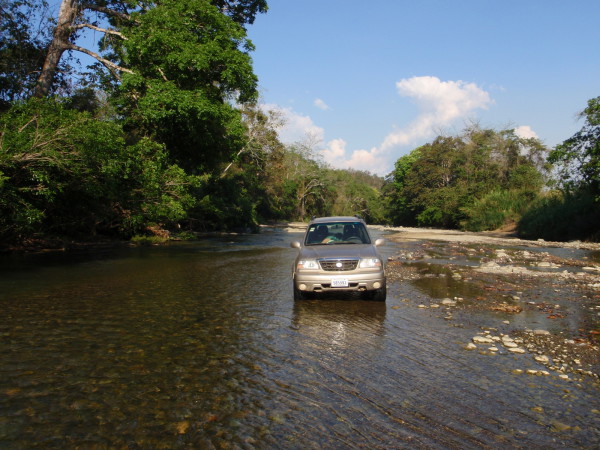 Slipping sideways while spinning all four tires takes about six times as much gas as just driving along and when the car starts floating down the river believe me the last thing you’re thinking about is mileage. It took no less than five hours to cover the 40 km from the turn east of Palmar to Aguila Abajo where the pavement started again and there was a service station just as we hit empty.

We weren’t certain if it was a commentary on the state of humanity that the little church we passed was boarded up and abandoned and the only occupied building we saw was a cantina. 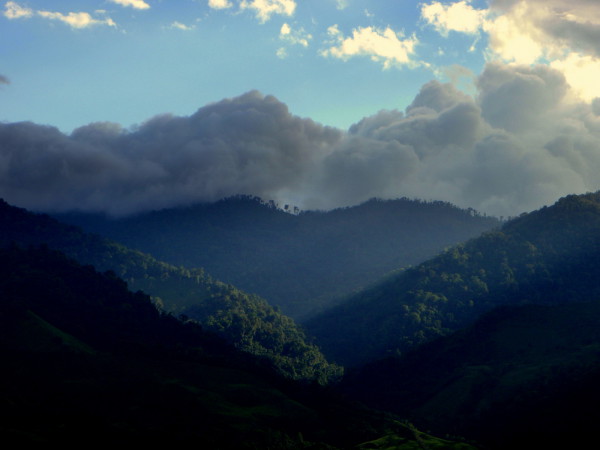 A bartender was serving warm beer (no electricity) to two vaqueros with their horses tied up out front (no one who knew better would try to drive here) when I went in to confirm that we were still on the road to Aguila.  As always when you ask directions in the middle of nowhere and there’s only one road they replied “directo, directo, directo,” straight ahead.  However they also glanced over their shoulders at our little car and added “hay un río grande,” – there’s a big river.

It wasn’t the car I would have chosen for this expedition (I like the Toyota Diesel Fortuner) but the Suzuki made it. 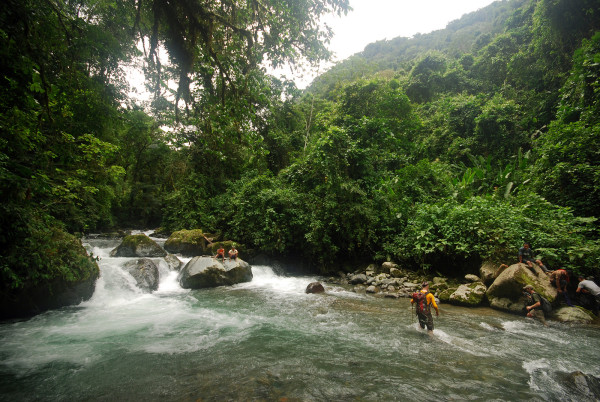 It took seven days of walking up rivers (we couldn’t pass any other way), cutting trail with a machete and climbing nearly vertical mud slopes. We carried a satellite phone with the $7.500 to land helicopter service phone number programed in, huge syringes and powdered multi-toxin anti venom, a surgical kit and the latest GPS technology.

We would have been totally screwed without the indigenous guides.

It was amazing, and that’s all I’m going to say about that.  If you’d like to hear more give me a call and buy me a beer. 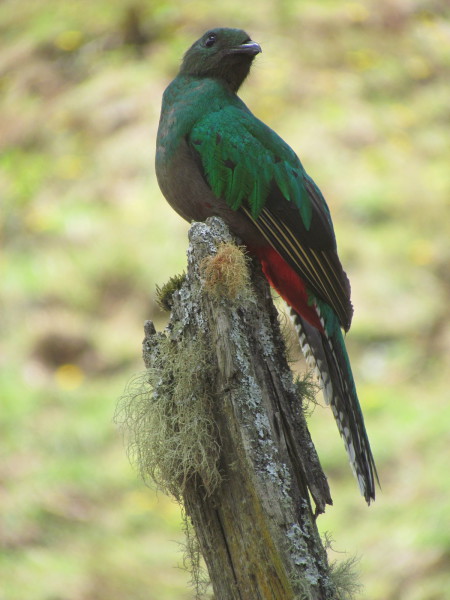 This tiny community at the headwaters of the Río Savegre is best know for the surrounding cloud forest and the Resplendent Quetzals that inhabit it but we were thrilled to find out you can fly cast for rainbow and brown trout too (we’re originally form Colorado if you haven’t learned that yet).

We’ve brought several friends to San Gerardo and they’ve all been enchanted by the huge oak forest (robles) transitioning into elfin cloud forest and finally rainy paramo as we climbed the trails towards either Cerro de la Muerte or Los Quetzales National Park.

Usually on the second day we head downhill along the Rio Savegre to the two waterfalls within about 3 km of the end of the road. 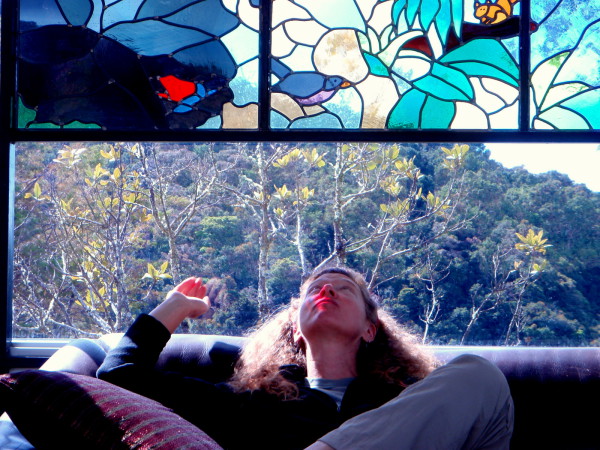 Another undiscovered gem here but surprisingly it’s at the top end of the accommodations category.  Dantica Lodge isn’t exactly luxurious but it’s functionally elegant with Scandinavian furniture, and floor plans that focus everything on the huge plate glass windows overlooking the surrounding cloud forest.  The individual habitations are placed so that no one without a helicopter could look in while you enjoy a glass of wine on the couch regarding the stunning views in your underwear.