The Central Valley is technically a very small area covered nearly completely by two million residents of the nation’s capitol and the metropolitan area. In practice the phrase is used to refer to the entire Meseta Central (Central Plateau) and the encircling slopes of the Tilarán, Central, Talamanca and Escazú mountain ranges. 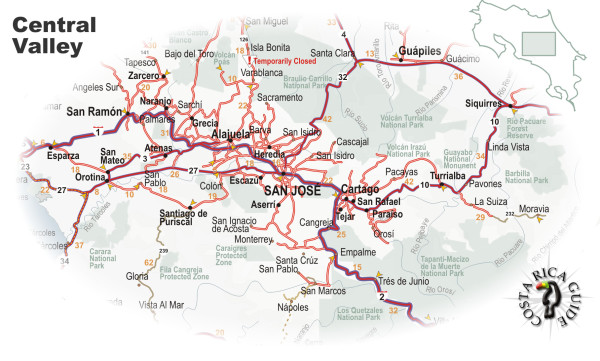 It doesn’t take long to understand why two-thirds of the population of Costa Rica lives in or around the Central Valley.  Temperatures linger in the 75 °F neighborhood year round and most days are sunny.  The rains in September through November keep the vegetation lush and irrigate the coffee planted in the fertile volcanic soils.

It’s also home to the main international airport Juan Santamaría, SJO (just west of the capital near Alajuela) where the majority of visitors arrive.

San José, the bustling cosmopolitan capital is set in the heart of the valley surrounded by suburbs with distinct characters of their own.  It’s definitely a city and most travelers to Costa Rica, focused on ecology, avoid San José and the Central Valley.

However, a wide variety of day trips are available that will get you out in nature all day and back to your downtown hotel in time to take a swim before dinner and baccarat or craps at the casino or an evening production at the National theater.

Downtown offers unique independent shops – librerías (bookstores), jeweler’s shops, tiendas for clothing, and of course zapaterías (shoe stores) which seem to occur at a rate of about one per family in Costa Rica.  The Mercado Central is still a unique market experience, even though it’s losing its cultural roots and growing more cluttered with plastic pop culture and bizarre Home Shopping Network rejects every day (in contrast, an excellent traditional market is found in Cuidad Quesada to the north). 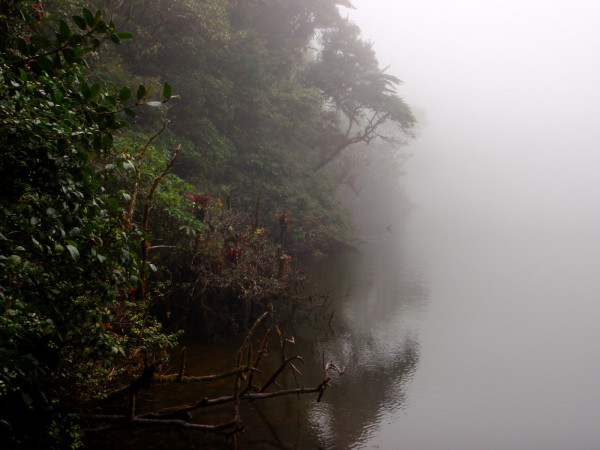 There are three volcano National Parks within easy reach of the metropolitan area.  In about two hours you can drive/bus/taxi to the crater rims of vulcáns Irazú and Poás (currently closed – see details) where you can peer down on sulfurous lakes, fumaroles and vents. Access to the crater of vulcán Barva (in Braulio Carrillo National Park) is on foot over extremely rugged steep trails, but hearty adventurers can visit it on a day trip from anywhere in the central valley.

The geothermal activity represents only a small part of the attraction of the Cordillera Central Volcanica cones that are accessible from San José.  While Monteverde is famous for its cloud forests it has become quite crowded in the past decade and much of the same geographical and climatological cloud forest association can be seen from the trails around any of the central valley volcanoes. Below, the slopes are blanketed in flower and vegetable farms, coffee plantations, montane forests, and berry patches and the roadside restaurants offer some of the best Costa Rican tipico cuisine found outside of farmhouse kitchens. 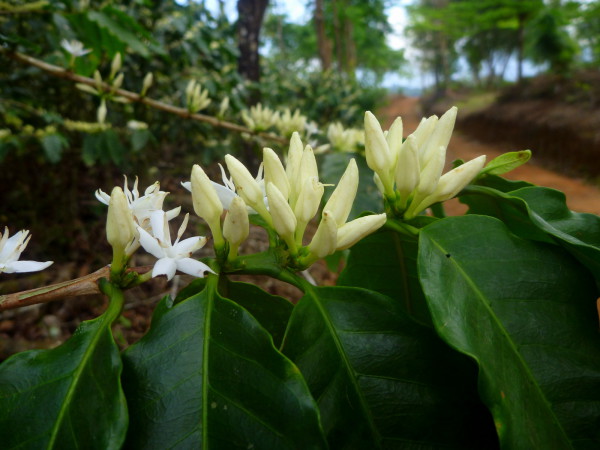 One of the most popular day trips from the Central Valley is the Britt or Doka coffee farm.  The Coffee Tour includes tour of the farming and production facilities and a short historical and cultural play.  If you drink black gold every morning it’s fascinating to follow the beans from berries on the bush to the roaster.

Many of Costa Rica’s major rivers have their headwaters within an hour or so of the capitol and a rafting trip can provide thrills as well as a pure rainforest experience with abundant wildlife along the calmer sections and backwaters.  The Pacuare river is rated as one of the top ten in the world and one or two day (overnight in back country luxury tent camps) white water trips pick up from all San José area hotels. 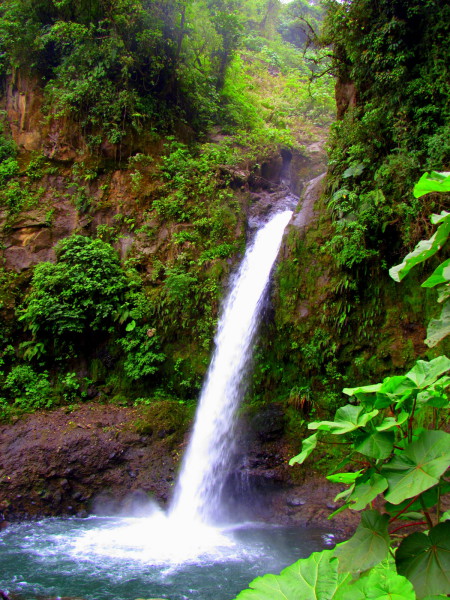 La Paz waterfall gardens has evolved into one of the most successful ecolodges and tourist attractions in the country.  The first time we visited it was free if you knew where to find the trail head, later it was another roadside attraction charging a little over $4 for access to the dirt waterfall trail.  Now it’s got botanical, hummingbird and butterfly gardens complimenting a paved and stair stepped trail through the rainforest along a series of four waterfalls.  Vans pick up at the bottom of the trail to return you to the lodge and visitors center on the ridge.  Day trips from San José are popular with or without a stop at the Doka coffee plantation.

Other attractions within easy reach from anywhere in the central valley include one of the finest orchid collections outside of Singapore located in the open air at Lankester Botanical Gardens, the best avian conservatory in Costa Rica at Zoo Aves, the most exhaustive serpent collection in the country at World of Snakes, and both the Pacific and Atlantic rainforest aerial trams.

Costa Rica has long been a world leader in watershed conservation recognizing early on that a major metropolitan area requires huge quantities of clean fresh water to thrive and that devastating mudslides are the inevitable result of deforestation.  Many of the volcanic mountain slopes above San José are protected by law and the residents of the associated peripheral communities are fiercely proud of their forests.

You can hike, bike, picnic, fish or just sit and enjoy the scenery in many of these protected rainforests designated as everything from protected zones through forest reserves to National Parks within an hour of downtown.