Almost a quarter of the world’s bee species can be found in Lomas Barbudal (Reserva Biológica Lomas Barbudal – Bearded Hills) Biological Reserve.  One of the more unique genus are the large, solitary, tunneling,  Abejas Antofóridas-Centris bees that attracted G. Frankie (now at the University of California, Berkeley) to study the area in the late seventies. 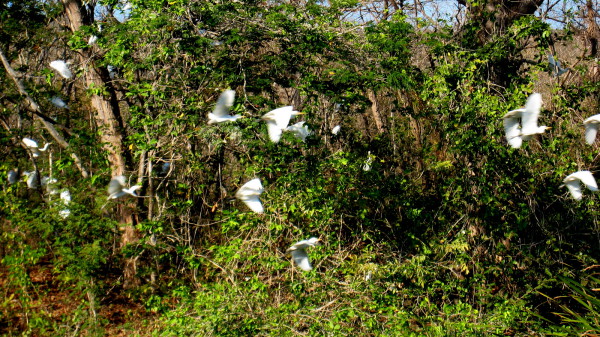 They recognized the region as one of the last remaining stands of tropical dry forest and established the Friends of Lomas Barbudal non-profit organization to protect the area.  Their efforts resulted in the designation of the Biological Reserve in 1986.

From the visitor’s center (Casa de Patrimonio) on the northwest tip of the reserve, the most popular walk is a short quarter mile upstream along the Río Cabuya to the poza. This watering hole attracts concentrations of wildlife in the dry season and is a perfect place for a cooling dip since many of the trees in this region are deciduous, drop their leaves and leave shade at a premium.  You may feel a little like you’re swimming in your home aquarium when you see the convict cichlids (Chichlasoma nigro-fasciatum)

or feel the green mollies (Poecilia gilii) nibbling at your toes.

A number of other unmarked trails and roads (official vehicles only) wander through the reserve, welcoming visitors to explore on foot.  Along with the bees and thousands of other insect species (it’s likely to seem like millions if you visit in the rainy season),  other interesting residents are pacas (Dasyprocta punctata), armadillos (Dasypus novemcinctus), and the fishing bulldog bat (Noctilio leporinus). The reserve is one of the last strongholds of habitat for endangered scarlet macaws (Ara Macao), giant anteaters (Myrmecophaga tridactyla) and collared peccaries (Tayassu tajacu).

Along the southern edge of the reserve lies the Quebrada La Mula, a seasonal stream, and the forest area of the same name that once formed a continuous greenway between Lomas Barbudal and Palo Verde. 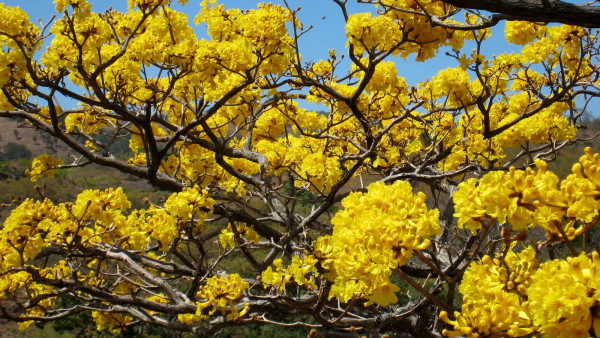 If possible come during the spectacular blossoming of the corteza amarilla trees sometime from mid March to mid April.  The blossoms only last four days once they open and somehow the trees in the whole forest knows what their neighbors are doing resulting in gregarious or simultaneous flowering…It’s like botanical fireworks!

Each month of the year is selectable on the drop down menu for a summary of the typical weather patterns and other info to help you decide if it’s the best time for your visit.

The main entrance road (dirt—4WD recommended, may be impassable when muddy) leads south off the PanAmerican Highway near km 221 (10 km northwest of Bagaces, 14 km southeast of Liberia).  The visitor’s center at Casa de Patrimonio is 7 km south at the bottom of a steep hill that affords a panoramic view of the area you’re about to explore Consider parking at the top and walking in to the visitors center when road conditions are marginal.

Alternatively there is a very rugged 4WD road leading northwest from the entrance station of Palo Verde National Park.  Check with the rangers for current conditions and regulations before setting out on this route.

The reserve protects 2279 hectares of freshwater river and tropical dry forest habitat.  Pressure from rice farming interests put the future of this natural area in question in 1994.