The consumer cost of many goods and services in Costa Rica jumped 13% with the new value added tax (Impuesto al Valor Agregado – IVA) on July 1, 2019.

Costa Rica desperately needs the money and the improvements it will buy if the treasury can prevent rampant tax evasion and the criminal justice system can do something about the corruption in government spending.

Note: truckers are again striking in opposition to the new tax (see details). In Costa Rica this means “tortuguismos” taking up all the lanes on the highway and driving slow like a turtle (tortuga) causing delays of several hours.

There are still some kinks to work out.  Technically a 13% IVA charge should appear on my U.S. T-Mobile telecommunications and mobile internet invoice for the months I’m using it in Costa Rica.  I guess that probably won’t happen.

The real increase in cost to consumers will be more than the simple addition of 13% tax to goods and services.

First there’s the factura electronica de comprobante – digital reporting to the treasury for every transaction.  Sell a candy bar, send a factura.

Of course businesses are required to utilize government approved contractors, services and software to integrate and interface with existing (or newly purchased) accounting, invoicing and payment hardware and software.  The companies we work with have spent a lot of money on this already.

Second there’s the huge increases in the cost of doing business – rent, electricity, water, internet & phone, accounting, legal and other services that companies use are now 13% more costly.

Companies will be forced to increase the price of whatever they sell to cover those costs.

Oh, and by the way, accountants, lawyers and other service companies will be some of the ones raising rates and every accountant has a lawyer and vice versa which bumps costs and price tags again.

The system is much to complicated to predict exactly how much people will eventually pay for things but it’s certain that it will be much more than a 13% increase.  For example…

How Much for an Organic Mango? 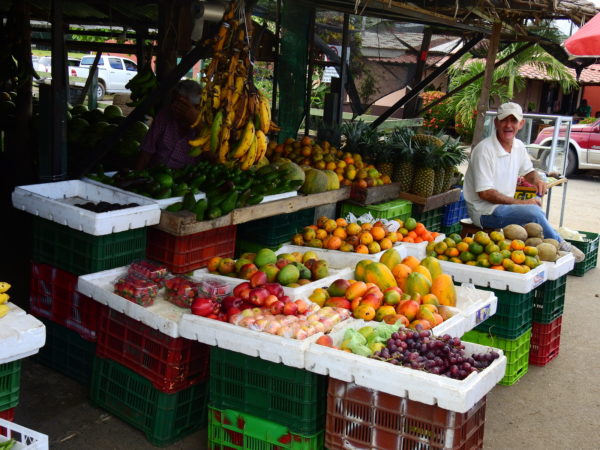 Before – a bag of organic mangoes at the farmers market was ¢600, about a buck which included

This example probably inflates the inflation that will occur because there are some exemptions and deductions.  Also costs for forced implementation of software are one time.

However, the requirements of the new electronic receipt system and the regulations for the new tax each changed several times before they were even initiated and will change again.

Each time the rules change all the software, interfaces, practices and job descriptions must change too.  A friend estimates that his company has spent about $80k in the year preceding the July deadline attempting to comply with moving targets.  There’s nowhere for that added cost to go if it’s not passed on to consumers.

As dire as all that sounds it’s hardly “death” but keep reading.

Economists and politicians state that the inability to collect existing taxes was a major reason for introducing the electronic reporting requirement and new taxes.  Tax evasion is a time honored tradition in Costa Rica and the cash economy was previously used mainly to avoid the 15% income tax.

In the mango example above it’s highly unlikely that someone with a mango tree in their backyard is actually going to set up a square terminal at the feria and integrate via 3G with the Hacienda factura electronica de comprobante database.  They’ll just keep doing illegal no-tax, cash transactions.

For bigger expenses cash payments without tracking or tax is even more tempting since the government has doubled down adding 13% IVA and incalculable bean counting and red tape costs to above board transactions.

A couple with an ocean view home on the central Pacific had a bed and bathroom remodeled and the contractor offered a much lower price for cash.  They made payments during construction and had stopped by three ATMs in town and maxed them out to get the final payment.

Unfortunately either someone saw them at the ATMs or one of the laborers noticed the previous cash payments.  A couple of days later three armed men accosted the owners in the driveway, forced themselves into the house, duct taped them together and beat and terrorized them at gunpoint while trashing the house, making snacks, and drinking all night.

The assailants knew about the cash but even after they found it they insisted there must be much more.  In the end they settled for a bit over a thousand dollars, a couple of t-shirts, a pair of sunglasses and a toaster oven.  No one was killed.  That time.

Unless the security situation improves any large sum of cash is perilous.  And, there’s an important distinction to recognize about the meaning of large sums – a couple hundred bucks is definitely enough to invite an armed assault and a thousand dollars could trigger kidnapping or in some cases even murder.

Skip the cash “discount” for anything bigger than a mango. It’s dangerous and illegal.

Leveling the Playing Field in Lodging

Guests at hotels, resorts and eco-lodges have paid a 13% tax for decades but short term vacation rentals like VRBO and airBnB slipped through the cracks giving them a big advantage in pricing.  It’s not clear how enforcement will work since many transactions take place outside the country but there were some announcements that airBnB agreed to integrate it on their platform.

In addition to the added tax visitors should expect prices to rise due to higher costs for things like cable television, electricity to run the air conditioner, cleaning services ect.

Sales of food and beverages in restaurants have always been taxed at 13% (plus an additional 10% impuesto de servicio – service tax) and that won’t change under the new law.  Some food in grocery and convenience stores will have an additional tax added but it’s less than the full rate – 1% to 4% depending on the product.

Zip-lines, bird watching guides, and rafting companies will all have to start charging the tax.

Ground transportation will be taxed at 13%.

Airfare will be taxed at a lower rate, 4% for domestic and 0.4% for international.  A $160 round trip San Jose to Tamarindo would cost $6.40 more and a $600 round trip from Chicago would cost $2.40 more.  It’s not clear if this will be added to the other $29 of departure taxes already charged on international tickets or collected by another mechanism.

An apparent concession to big business at the expense of locals is the exemption of services provided by international travel conglomerates like Expedia and TripAdvisor etc.  Tourism is a huge part of Costa Rica’s economy but the government chose to favor funneling the profits out of the country by giving the foreign online companies an unfair competitive advantage – the rich get richer.

One of the most contentious parts of the new law is the taxation of basic foodstuffs like beans and rice who’s exemption was always considered sacrosanct.  The canasta basica – market basket of basic necessities will have a much lower rate of 1% but other foodstuffs (including anything organic according to producers) would be hit with 13%.

In what is an obvious political move some big international agri-businesses (pineapples, sugar cane) appear to have been exempted while local, small farm organic produced (like the mango example above) suffer the full weight of the tax.

Unlicensed ride services like Uber are illegal in Costa Rica and the powerful taxi union has been fighting to keep it that way.  In 2018 the taxi lobbyists helped defeat legislation that would have allowed Uber to pay a “fine” (aka bribe) for operating illegally since 2015 and go legit.

After flaunting Costa Rica’s laws for years Uber oddly stepped up in 2019 and volunteered to start charging riders the new 13% IVA automatically and funnel it into the government coffers.  The taxi union recognized it as a ploy to legitimize Uber through the back door – illegal activities are not taxable so by definition it must be legal – and has threatened to take the government to court to force them to reject taxes paid by Uber users.

This new tax is a stunning achievement in an era who’s worldwide theme seems to be “something for nothing and everything for me.”  It has the potential to fund education, transportation and infrastructure like replacement toilets for the ones that started spilling raw sewage at Manuel Antonio National Park ten years ago.  Many believe it will just be more money to line the pockets of corrupt officials and contractors but we’re hopeful it will benefit the people.