The most important thing to know about trying to find a mini-storage or self-storage unit in Costa Rica is that they are called “mini-bodegas“.  Google translate will tell you that means “small winery” but don’t let that confuse you.

Info on prices, security, locations and potentially cheaper storage alternatives is summarized below.

Of course there’s a wide range of costs depending on size, security, location and climate control options but one thing is consistent – storage units are expensive in Costa Rica.

We requested price quotes from half a dozen modern facilities for 2020 and found that a small (6 square meter) unit averaged $190 per month – we’ve seen studio apartments for not much more.

Unless you’re planning to leave stuff for years it may not be worth spending too much time bargain hunting. None of the dozen or so companies we found (see list) post prices online and getting any information on costs was difficult by e-mail or with a gringo accent over the phone. When we had a Tico friend call she found that prices were similar for similar sizes.

Move in specials like “50% off for two months” or “get the second month free” are common but read the fine print because there may be a 6-12 month commitment.  Discounts (10-20%) for paying for a full year in advance are also widely available and don’t come with a “gotcha”.

Sizes range from a small closet to a small warehouse and some of the storage facilities also offer long term secured parking.

Unless you’re planning on storing a pile of rocks consider renting a climate controlled unit. If your stuff is worth paying to store it’s probably worth protecting from extreme high temperatures and humidity that can grow fungus, mold and mildew on an amazing variety of surfaces.

Freight elevators, hand carts, secure parking for your car or truck while loading and unloading and pest control (control de plagas) are another amenities to look for.

Perhaps the best way to save money on storage units is to have a garage sale or su basta (auction) to just get rid of all that crap.  If that’s not an option then there are some creative alternatives to the corporate storage facilities.

We’re going to go ahead and start by saying it’s not a great idea to give all your stuff to a random stranger from craigslist or facebook.  If you ask in expat social media groups you can get whatsapp contacts for entrepreneurial parking lots  (a guy who has space for your car behind his house near the airport) or garages where you can stack boxes.  We are definitely not endorsing them by mentioning that it’s possible – use at your own risk.

A more reliable storage option, especially if you only have a few bags or boxes for a short time, are hotels and hostels.   Most (especially near the airports) will hold a couple of suitcases for a week or less and we’ve often done this when we’re headed off trekking in the wilderness and want to travel light.  Some provide longer storage if you ask nicely and/or offer to pay.

“Neighbor is the AirBnB of Self Storage” and they even say that on some of their marketing material which implies they are either actually owned by airbnb or really lucky they haven’t been sued yet.  But that’s not important.  What is important is that it doesn’t exist in Costa Rica yet.

Locations of Self Storage Lockers

Not surprisingly the vast majority are concentrated in the central valley where 80% of the population lives. 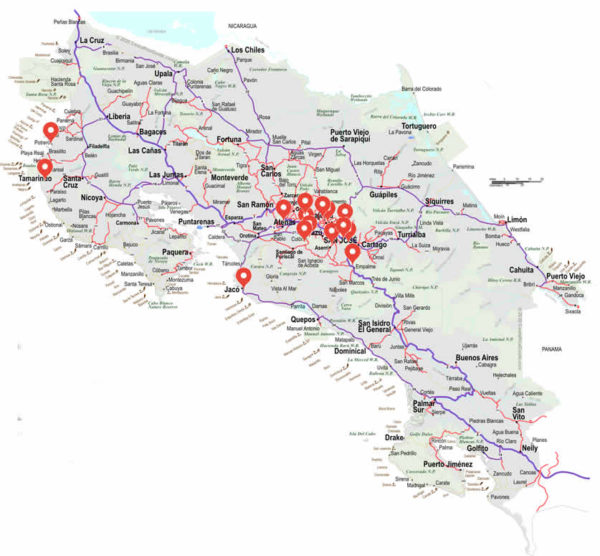 There is no storage available at SJO international airport.  The nearest is about 15 minutes away in San Antonio de Belen – Mini Bodegas Storage CR.  Escazú and Santa Ana are popular with gringos and there’s a facility there called LOQStorage.

There are two other modern facilities near the affluent beach communities of Tamarindo and Flamingo west of Liberia.  The marker in Jacó is for a locker only (no garage size units) facility described below.

It’s hard to know what to do with your stuff at the playa.

We’ve seen a few different very short term storage (a few hours) options come and go from the beaches.  There was a mobile locker trailer on Playa Tamarindo for a while but it was gone last time we visited.  We were told it was stolen…kinda funny…but not.

A new secure locker facility opened in Jacó beach in 2019.

The large lockers are $6 for the first two hours plus about $2 per hour after that until you reach $30 for 24 hours.  Although they’re mainly intended for short term use there is discount pricing for extended storage – $95 a week and $180 for a month.   Smaller lockers start at $3 for 2 hours then $1 an hour.

For an extra $2 (total not per hour) you can get a locker with an internal USB power supply so you can charge your phone while you surf.