One of the biggest sources of uncertainty and cause of concern for anyone considering a move to Costa Rica is “How much does it cost?”

We recently ran a Costa Rica vs. Colorado test on a couple of website databases that theoretically allow you to compare costs of living around the world – Expatistan.com and Numbeo.com.

The idea behind the websites is that you can ask locals and/or expats how much things cost and if you get enough answers the average should be close to reality.

How Can We Claim to Know the “Truth”?

We split our time between Fort Collins, Colorado in the U.S. and Costa Rica and we have a number of friends and business associates living both places who helped out analyzing how accurate/inaccurate the prices on the websites were.

In late 2018 the online comparison only had sufficient data for San José and the metro area.  The capital isn’t featured in most relocation daydreams but can be used to determine how good comparison generators like Expatistan.com and Numbeo.com are.

The results were fairly accurate in some categories but not in others.  To get an accurate picture of costs plan to supplement the comparison websites with other resources for serious planning or budgeting.

Food Comparison – Prices are about the same which is about right

Food was the only one of the big four where the survey did a good job.

I’m an excellent cook, Sue’s a superb baker, and eating out is in our top ten favorite past-times so we’re quite well educated about prices in the markets and on menus.

The survey said food was more or less the same price which overall is true.  A few extreme outliers like Papayas which are basically free in Costa Rica but cost $5 in Colorado may have some seasonal impact but on average it works out.

Most of the entries in the “Entertainment” category were actually food and drink.

The prices listed in the housing section are confusing.  There’s obviously something amiss when the price for a rental is essentially the same in the EXPENSIVE area ($2,186) and the NORMAL area ($2,006) in Colorado. 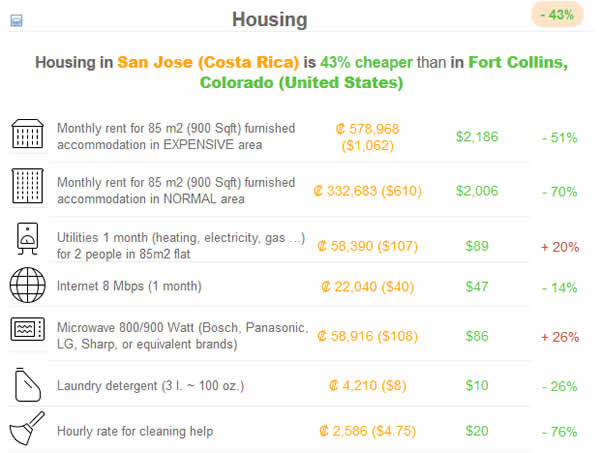 Overall they determined that housing in San José was around half the cost.  That may be accurate on average but personal preferences will pay a strong part in how much you spend.  Knowing what we know about both places we’d probably end up paying more in San José to find a neighborhood and housing with the amenities we consider standard and an acceptable level of security.

Most potential expats will probably have to spend time reading real estate listings and viewing actually properties to get a sense of how much they’ll need to spend.  The numbers for San José don’t have much to do with prices in rural and beach areas so the survey is not much help in the areas popular for relocating.

Healthcare Differences – Too complex to calculate

Beyond a box of tampons, packet of aspirin and checking in at a clinic with the sniffles the database doesn’t attempt to address insurance or healthcare.

Outside insurance (medicare or private) and health plans rarely pay for anything in Costa Rica.

In general the United States has spectacularly expensive insurance and even more ridiculously priced healthcare and you frequently don’t get much for your money.  It’s likely that people from the U.S. could end up spending much less for basic care in Costa Rica.  Advanced care is only available at private facilities which are closer in cost to U.S. prices.

Canada and many parts of Europe have high quality care with nearly no out of pocket expenses.  It’s likely that people from these regions will spend more and get less than they would at home.

Transportation Expense Comparison – Not Even Close

Even though the site claimed “This comparison is based on abundant and consistent data.” there were some glaring inaccuracies.  The most extreme example was the underestimation of the price of a vehicle in Costa Rica by 100%.

The survey indicated ownership of a “Volkswagen Golf 1.4 TSI 150 CV (or equivalent), with no extras, new” would be 8% cheaper in San José than Colorado when in fact new vehicles are roughly double the price up front and much more expensive to maintain in Costa Rica.

I don’t know what your budget looks like but we can’t afford to be off by twenty grand when planning transportation expenses.

Other problems arise when comparing day to day costs of operating a vehicle.

It’s very tempting to look at gasoline prices at roughly $5 a gallon (¢725 per liter) and think it’s not too bad when the price at the pump is $3.00 in the U.S. and much higher elsewhere.

However, it’s important to realize that your gas mileage will be roughly 1/2 of the rated efficiency of your vehicle.   Horrible mileage is a result of massive traffic jams, nearly continuous acceleration and deceleration due to extremely inefficient road design, ubiquitous steep hills and roads that just go straight up and down rather than contouring or traversing (engines are very inefficient when stressed this way), poor quality gasoline and mechanical defects (see below – misaligned from the pothole slamming, gunked up injectors, ). 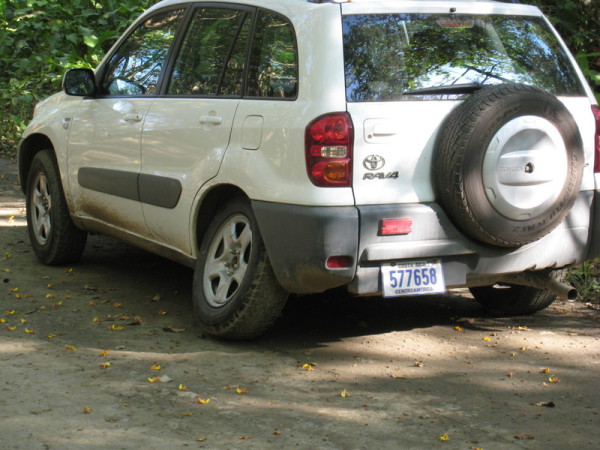 What is Wrong With the Cost of Living Websites

The two websites we tested seem to give similar results (including similar errors) Expatistan.com and Numbeo.com

The cost comparisons are quite ethnocentric, assuming that everyone wants what amounts to a middle class American (U.S.) lifestyle. The items that are included and the importance given to different categories create a built in bias.

While it’s true that the majority of young Ticos strive for the dream of 2 cars in the garage, drive up fast food, two incomes, 2.3 kids, and 152 channels on a big screen TV etc. many expats are seeking something else.  A different lifestyle with no car, a kitchen garden full of organic vegetables and screens on the windows instead of air conditioning gives very different results.

Another major source of error is that in many cases there just aren’t any “comparables.”

The “Rockford Files” house trailer next to the Paradise Cove Beach Cafe, Malibu was gentrified into multi-million dollar real estate 40 years ago.  There are no simple little $600 a month houses on the beach anywhere in the U.S. and there just isn’t anything equivalent to our Colorado house or neighborhood in Costa Rica.

It’s also hard to identify where quality comes into the surveys.  For example the U.S. price for U.S. Levis 501s is compared to the Costa Rican “or equivalent” which may fall apart in a few weeks.

The price of a beer is weighted the same as the price of a car when finding averages. So if a pizza is 25% less but a house is 25% more that averages out to no difference which is obviously wrong.

Overall the cost comparison websites were helpful for getting a general idea of the similarities and differences in the cost of living in two places.  They were not particularly useful for looking up specific items because some of the information was just plain wrong.

Will Probably Improve as Data Accumulates

Both surveys consider a couple hundred contributors a “reliable sample” but it will probably take at least a few thousand contributors to get accurate values.

Unfortunately there’s some circumstantial evidence that some of the entries are intentionally fake.  One possibility would be real estate agents trying to convince people from the U.S. to move.

How the Cost of Living Really Compares Between the U.S. and Costa Rica

Approximations based on our personal experience and that of several families, couples and individuals who’ve moved both directions

On the other hand a luxury standard of living on the beach in Costa Rica is much cheaper than Malibu, Oahu or Miami but comes with caveats. A nice 3 bedroom beach or beach view house with a nice lot, guest house, swimming pool and gated access in Costa Rica is closer to a million dollars than the ten to twenty you might spend in the U.S. but they aren’t quite identical.

You may find that you can’t get a decent ice maker in your refrigerator no matter how much you pay, you have no water or electricity several days every dry season or that you can’t leave because the road washed out in the rainy season. However if you’re shopping in the multi-million dollar range you can probably afford a back-up generator, personal water tower and a Humvee.

If you want to significantly lower your standard of living (by commercial standards…maybe raising it in reality) and simplify your life by getting back to basics…no A/C, no hot water, cinder block and tin roof construction, grow your own food…Costa Rica is significantly cheaper than the U.S.