In October of 2017 Tropical Storm/Hurricane Nate provided a perfect example of how a cyclonic low pressure system in the Caribbean could cause massive rainfall and flooding in the central mountains and on Costa Rica’s Pacific side.  (see road closures)

The Caribbean coast ends up in a “rain shadow” since most of the moisture has been driven out of the air by the time it flows down the eastern slope of the central mountains.  The Caribbean side was not dry but escaped the brunt of the rainfall. 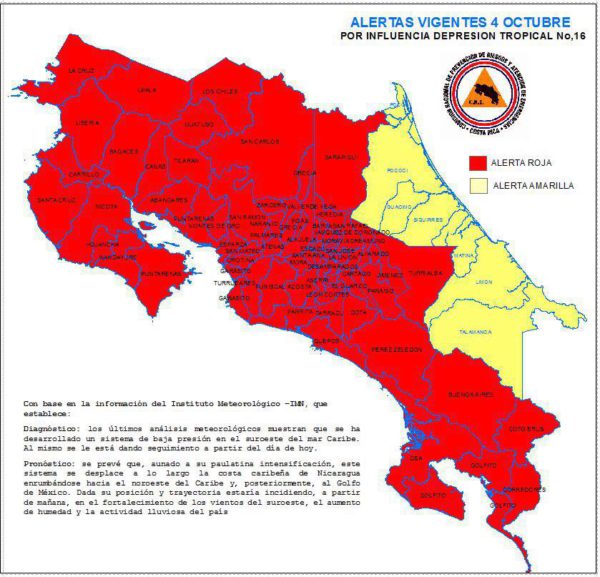 The Waze App has some live info on closures.  However, there is no data for some large segments of the roads listed below because there are no cars on them transmitting data.

Although the update below includes the status of major roads impacted as of October 21st the list below is NOT comprehensive.  There are many other minor closures.  It may be several days to several weeks before some of the roads reopen as the structural damage is still being assessed but in many cases entire bridges or sections of road are completely gone.

No major changes have been announced in the past few days.  A new weather system (Disturbance 93L) that brought significant rainfall October 22-26 moved north without having caused major damage.

The PanAmerican Highway is restricted on two sections

2) Hwy 2 is closed every night but open from 6 a.m. until 6 p.m. daily from Cartago through Piedra Alta (Cerro de la Muerte) to San Isidro.  There are restrictions on heavy vehicles, one lane segments and ongoing construction – the latest bulletin from the highway department says to expect significant delays until mid December –  alternate route is Hwy 27 to Orotina then south on 34

Other routes and delays that may impact tourists

909 – near Hatillo – this is located about 25 km east of Tamarindo but impacts local traffic only.  It does not impact traffic between the beaches and Hwy 21 (the Nicoya road).

243 – between San Isidro El General and Dominical – MOPT reports indicate that this route remains closed.  Local residents have told us it’s passable.  No definitive information is available.  Installation of a Bailey bridge is projected to be complete early November – alternate route southeast on Hwy 2 from San Isidro to Palmar  then northwest on 34 to Domincal

Other updates on road conditions

PDF map with details of initially impacted roads from Costa Rican Highway Department (CONAVI) (many of these have been repaired and reopened – see below). 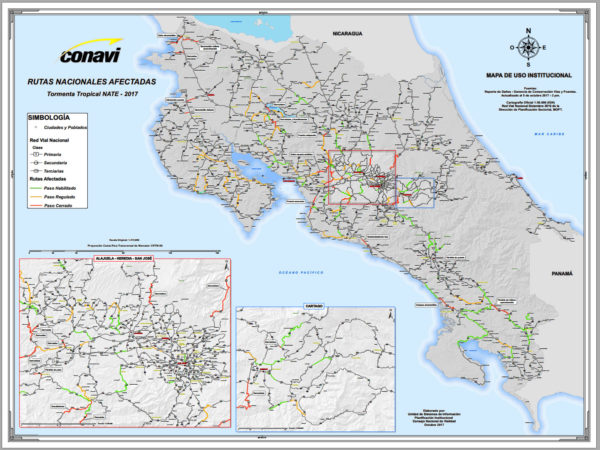 Upcoming Weather the Second Half of October

October is normally the rainiest month of the year in the central mountains and on the Pacific coast.  That pattern will likely continue but may cause more landslides, road and bridge outages than normal because the ground is hyper saturated from Nate.

Upcoming weather is predicted to be milder with seasonal rainfall but no major storms.  All of the data I’ve seen focus on Ophelia and LO-17 low pressure systems which are still far to the east but very far north of Costa Rica and predicted to stay up north.

The only new systems on the radar are in the neighborhood of the Bahamas.