Heading into the 2020 high season there’s still some uncertainty. The new 13% Value Added Tax introduced in July 2019 definitely had an impact but there are more price increases to come. 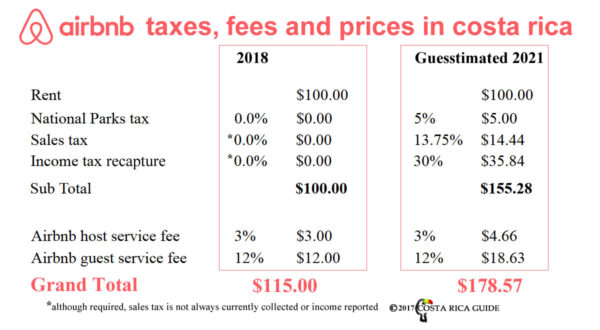 Some hotel and lodge owners have expressed concerns that rental properties and room shares have an unfair advantage in Costa Rica because they do not pay taxes.  Pablo H. Arbaca Mora, president of La Cámara Nacional de Turismo de Costa Rica (Costa Rican Tourism Chamber CANATUR) is working to change that.

Over a year ago Arbaca reported that an airbnb representative agreed the company would be willing to “adjust its platform to facilitate tax collection from airbnb hosts of short-term rentals of less than thirty days.”

In the most extreme example the total price increase could be as much as 64% with the cost of a “$100 a night” room jumping from $115 to $178.57 when fees and taxes are included.  The details of the agreement aren’t available but the idea appears to be to use the airbnb platform to not only charge the currently uncollected 13.75% sales tax but also to gather data on income tax evasion by hosts and landlords.

Seems ironic since some believe the success of airbnb depended on landlords circumventing tax, zoning, insurance, fire safety and other regulations to undercut hotel, lodge and resort room prices. 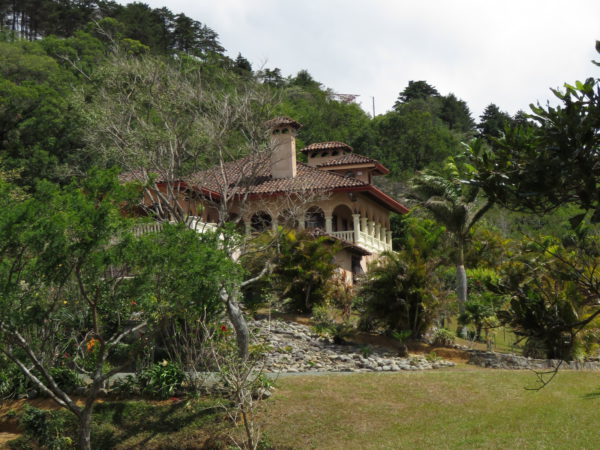 Some vacation rentals currently operate in a sort of black market.  Short term rent is not generally reported as income and often no income taxes are paid.  If the Ministerio de Hacienda (the Costa Rican Internal Revenue Service) could access records of each rental transaction from airbnb they could use the information to extract 30% income tax from the landlords.

The final impact on prices is anyone’s guess.  The details are yet to be worked out to determine which taxes will actually be enforced, which fees will apply to which taxes and which fees might be taxed. It’s also not clear how much hosts will raise prices if they have to start paying 30% tax on the income.

Officials indicated that all sharing economy platforms should become tax collectors and they intend to pursue similar cooperation from TripAdvisor, Vacation Rentals by Owner (VRBO), Home Away and Couchsurfer.  Look out Uber…you’re up next.

Other legislation which would require all rental payments be made using credit cards with the issuing banks providing the government access to the transactions to enforce taxes has also been proposed.

How Likely is a Big Change?

The possibility of big price increases depends in part on there being some hosts that currently do not collect sales tax or pay income tax on rent.  For rentals that are being run completely above board with all taxes paid there wouldn’t be any change at all.  Even the new National Park tax is proposed to be waived for landlords registered with the ICT as lodging providers.

However the lodging industry believes most are not paying and has long sought to level the playing field for rentals by eliminating tax evasion.  The problem has been that although tax laws were on the books there was no way to enforce them.

Change comes slowly in Costa Rica and the government is famously ineffective but since Shawn Sullivan, airbnb’s public policy lead for Central America and the Caribbean, said they’re willing to start acting as the tax collection agent change may be on the way.

Another aspect of the battle between entrepreneurs and the government and hotel/resort/lodge industry is the weaponization of handicap accessibility standards.

Costa Rica has laws that could be interpreted to require unlimited accessibility for everyone everywhere.  Of course the hospitality industry would love to see two story beach houses forced to either install a $95,000 elevator or withdraw from the market.