About GPS in Costa Rica

Now that offline base maps and data are available for maps.google.com and Waze for free there is no need for expensive dedicated GPS (see how to).

There was never any point bringing a GPS unit from home to Costa Rica unless you purchased a supplemental data and map set ($89-$139 from companies like Navsat, SmartWays or EasyFind) because GPS units sold in the U.S., Canada or Europe typically do not include detailed routeable data for Costa Rica.

Of course you’ll get satellite data and know that you are precisely 9.568507 degrees north, 84.593600 degrees west, and I can tell you off the top of my head that that’s Playa Hermosa but without a base map and routing info your GPS will simply show a green arrow in the middle of a yellow screen (with maybe some blue indicating the ocean if you’re lucky).

Your Garmin, Magellan or TomTom will be nothing more than an expensive brick to lug around.

If you want to check at home there are a couple of ways.  Try routing from SJO airport, Alajuela, Costa Rica to La Fortuna, San Carlos, Costa Rica and see what you get.  You may also be able to swipe, click arrows and zoom until you have a fairly close up view and see what level of detail is shown.

If you want a dashboard GPS in Costa Rica you must rent one (available as an add-on with car rentals ~$10 per day), buy one locally (~$200) or purchase and download an appropriate base map and routing info to the unit you already have (~$75).

GPS data and routing has gotten much better in Costa Rica and it’s reasonable to assume that if you’re staying on the standard tourist routes the GPS units available for rent with your car will get you where you want to be.  Of course there are exceptions.

Don’t leave it in the car.  It will be stolen!

The offline map feature from Google is now available for Costa Rica and provides free base maps and routing information for your phone, tablet or other device even when cell signal or wifi is unavailable…read how it works and how to use it here.

Waze was tested in Costa Rica and began gaining popularity internationally in 2015 when it was purchased by Google.  As of 2020 it’s the most current and reliable navigation system in Costa Rica.

There are many other maps and geocoded waypoints available for free on the internet or as apps.  By far the most reliable and complete data is from Waze and maps.google.com including earth, traffic, panaramio and the other Google mapping services.

However, at least 10% of the hotel, restaurant and other business locations are incorrect (often by many miles) and a significant number of the roads and towns are missing, misplaced or do not exist.

Remember that your phone may use GPS satellite signals for positioning but it uses a data connection for the maps and routing.  This can be very expensive and unreliable.  Cell signals (and therefore data) are not available in remote or heavily forested areas in Costa Rica possibly leaving you without a base map or routing information just when you need it most.

If you’re relying on a phone app make sure you’ve got your whole route planned and downloaded before you’re lost and need it or you may end up with the useless green arrow.

We recommend that if you want GPS routing you rent or purchase a unit with a reliable base map or check out the free offline maps from Google.

Using a “Real” Map With GPS

GPS makes turn by turn navigation a breeze but even a good base map provides a poor overview.

A print map serves two main purposes in conjunction with a GPS.  First it’s a reference to confirm or refute the information provided by the geocoding technology and second it gives a broad view that’s impossible to get on a two inch screen.  Of course we’re pretty biased since we author and publish the #1 bestselling Waterproof Travel Map. 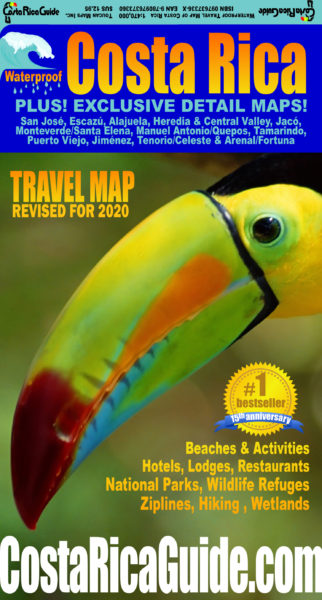 The Big Picture Can Save Hours

It’s nice to have a bigger picture of your location and surroundings than a fat yellow line with a couple of squiggles on a screen and a voice saying “turn left in 50 meters.”

Not only is it nice to be able to see that Costa Rica is not an island, whether you’re on the Pacific side or Atlantic and that you’re headed into the mountains in a few km but sometimes an overview can also save you hours of driving.

We recently heard from a driver who’s GPS routed him through Alegria over Cerro Mercedes, down to Turrialba and Cartago to get from the Caribbean to the airport in San José.  He were glad he started at six in the morning because it was nearly dark when he arrived.

If they had checked the big picture they would have seen the proposed route included gravel roads through the mountains and dozens of km of city driving (which took them hours in traffic).  On the map it’s obvious that the route they followed would be an adventure and the most efficient (although slightly longer) route would be the highway through Limón that enters the metropolitan area on the north west nearest the airport.

The GPS route was shorter but wound through the mountains and entered the central valley on the eastern side and sent them across the entire metropolitan area at rush hour.

The map grid includes longitudes and latitudes so you can quickly locate your current position from a GPS readout.

Another review of the map said it “saved” one couple’s marriage when they used it to figure out how to find the ferry terminal in Paquera.  They were exploring some back roads on the southern Nicoya Peninsula and the difficulties started when their GPS unit instructed them to turn where there was no road.

Of course once they ignored the instruction the GPS kept trying to get them back on the “proper course” and after a frustrating series of wrong turns and backtracks it directed them to bluff overlooking a beautiful deserted beach.

They used their current coordinates to figure out where they were on the map, reversed course and hit the paved road to the ferry terminal just in time to catch the last boat before dark.

We can’t make this stuff up (and you can read the originals for yourself on the Amazon reviews).

Finally, a printed map doesn’t require batteries, never crashes and reboots with a message like “permanent data error please reload”, and doesn’t lose signal under heavy canopy, in steep canyons or when it’s raining hard (water is one of the most effective absorbers of GPS satellite signal).

Anyway, go buy the map.  We need to fund our next research trip around the country for updates…and maybe a margarita or two on the beach.