The recent sixth consecutive extension of the closure of Costa Rica’s borders from the end of June until at least August 1 was expected but disappointing.

At a press conference at the end of June the president promised international visitors a comprehensive and detailed plan with specific dates for re-opening and a realistic answer to the question “when can we come to Costa Rica?”   Instead the ministers of health and immigration delivered more delays, procrastination and promises that real information will be provided sometime in July.

Currently the official stance is that the borders will re-open to travelers arriving on direct flights from a very limited number of countries where the virus has been controlled.  No criteria are available to define “control” and no countries have been named.

What is clear is that the U.S. will not be on the list of safe countries and neither will Mexico or dozens of other countries that account for approximately 80% of international visitors.  Most tourists are still banned indefinitely.

Costa Rica’s government and people did a remarkably good job minimizing cases in the first three months of the crisis.

They shut down international arrivals before the virus was widely distributed, they imposed strict limits on movement and interaction to prevent spreading and they used testing and tracing to isolate carriers.

Round one from March into May was limited to a thousand cases and single digit fatalities.  One of the best records of limiting transmission anywhere in the world.

Round one was a few weeks of extreme measures but round two will be months or even years of defining reasonable precautions and acceptable infection rates.

Costa Rica now faces a difficult choice.  Either remain completely isolated (the only way to continue with the record low number of cases), or open up and allow infected visitors.

There are a lot of false statements about travel to or from Costa Rica circulating on the internet and social media.

What’s Next for Costa Rica?

New Zealand and Costa Rica have a lot in common.  Both are small countries with central mountain ranges and 5 million people.  Both closed their borders to foreigners and locked down residents at the end of March keeping their infection totals around 1,000 until May.

However, there are three huge differences.  First, New Zealand actually is an island and despite the popular misconception to the contrary, Costa Rica is not.  It borders Nicaragua and Panama. 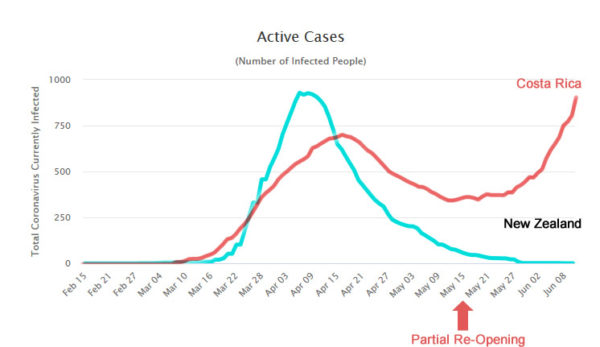 The surge in cases appears perfectly aligned with the incubation period following the partial re-opening of hotels, beaches and national parks on May 16 but this is simply a coincidence.

The Nicaraguan government did not encourage isolation so many of the workers arriving in April and May carried the virus.  The living conditions in Costa Rica are cramped and unsanitary; perfect for transmission and the creation of clusters.

Another industry that employs large numbers of Nicaraguan nationals is tourism.

These migrant domestic and service workers are not contributing to the new outbreak yet because they are not working now.  Most of the large resorts remain closed and the small hotels and lodges are getting by with just family since occupancy is only 5%-20%.  Obviously though this will change as demand for tourist lodging returns.

New Zealand plans to remain isolated and it will work well on the islands.  Some people mistakenly believe Costa Rica should continue with the same approach.

They are concerned about permitting tourists from countries like the U.S. that responded too late and/or ineffectively and where internal restrictions are relaxing even as cases pass two million and tens of thousands are added daily.

Two of Costa Rica’s most important industries, agriculture and eco-tourism, rely on foreigners and as difficult as it will be Costa Rica’s government will soon decide how many new cases per day they are willing to accept in exchange for a functioning economy and a place in the world.

It’s been suggested that tourists could be tested before entry but that would only be adequate if the originating countries had tremendously better control.  Currently infection rates outside Costa Rica are so high that significant numbers of visitors would be in the incubation period and undetectable.

Quarantining arrivals has proven effective but since the average vacation is less than the 14 days required there would still be no tourists.

Ideally there would be a scientifically based, rational and comprehensive world wide plan for internal control and for movement between countries.

Why This is Different

This is the “new normal,” and any realistic plan to revive international travel must address infection reservoirs, incubation periods, and asymptomatic carriers.

Of course these are all things we’ve been dealing with for decades with other killer viruses like the flu.

Covid19 is very different but not for the reason you think.  Of course there is a high mortality rate but fatalities were 100 times higher in the 1918 flu pandemic.

In fact in the first six month this coronavirus has killed 20% fewer people than an average recent flu season.

There wasn’t a significant change in the world of infectious diseases with the evolution of this cornavirus.  The only change is in the way we are looking at it.

Lockdowns and quarantines would have saved hundreds of thousands of lives during each of the past flu seasons.  Think about that for a minute and ask yourself why we didn’t.

The simple answer is – it was normal and acceptable for people to die from the flu. No one who wasn’t impacted directly noticed or gave it any thought.

The difference with Covid19 is that it made the world aware that, “if you leave your house it increases the chances my grandmother will die.”

That has always been true but people are thinking about it now.

We don’t point this out to trivialize the pandemic or the stay at home and distancing that reduced the impact.  The point is that while serious, it’s far from unprecedented and we will learn to live with it.

How To Fix International Travel?

The first step to resuming international travel is for countries to switch from the emergency mode “we don’t know who has it so everyone stay home” to a reasoned long term strategy.

The nationalism, political ego, and denial that has tainted some responses must be replaced with science, data and rational thought. That means massively increased testing both for tracing asymptomatic carriers and for statistical analysis which will allow leaders to replace speculation and conjecture with informed planning.

“Everyone stay at home” will be replaced with isolation of people with the virus.  The most successful control has come from a test, trace, isolate and treat approach.

Evidence from places like Hong Kong and Taiwan where mask use is culturally ingrained shows they can reduce transmission by 80% or more – that’s more effective than any but the most draconian isolation schemes.

The same concepts apply to crossing borders if and only if the countries of origin and destination all have transmission under control.

The trace, isolate and treat part of the equation for people who test positive would be done back at home after they are blocked from entering if they test positive.

The long term solution will evolve into a permanent solution as vaccines are introduced, testing improves, and treatments develop over the coming years.

Since the only way to safely resume travel is if all countries reduce cases to manageable levels for test and trace to work it’s important that everyone works together.

Traditionally the world has looked to the U.S. for leadership in times of crisis but there is none there.  The country that leads the world in cases and deaths abandoned international cooperation and exited the World Health Organization.

The other superpower, China, used autocratic powers to enforce extreme lockdown resulting in millions fewer cases than the U.S. but also seems disinterested in leading.  Instead they’re using the advantage gained by quickly containing the virus internally to subjugate Hong Kong while the world is distracted by the ongoing pandemic.

South America, India and Africa are spiraling out of control while implementing every country for itself responses.

Europe is the only major player that is working towards reasonable cross border solutions.  Of course they aren’t inviting the rest of the dysfunctional world and are working regionally to reunite German tourists with Spanish beaches for example.

Perhaps little Costa Rica is ready to step up, make some sensible suggestions and take on a role of world leader.