Protecting tools and work product in Costa Rica requires education and hyper-vigilance.  The most important thing to learn is that being surrounded by genuine and friendly people in a civilized, modern paradise encourages a very false sense of security.

“Costa Rica is just like anywhere – crime happens – use common sense and you’ll be okay” are dangerous fallacies.  Theft is an industry here and despite experience in dozens of countries around the world travel veterans frequently end up being robbed in Costa Rica.

Thirty years ago data was less of a target.

Our rolls of exposed 35mm film and scribble and sketch filled notebooks were of no value to criminals so we didn’t worry about being stabbed for not giving them up.  Unused film was crazy expensive in Costa Rica so maybe… but the content we were creating was relatively undesirable in pawn shops.

That content is still not too interesting to thieves but they certainly want the containers it’s kept in.

In today’s digital world photos are likely to be wrapped in a few thousand dollars worth of camera, video is inside a drone, and notes on a computer.

Thieves are not interested in the hours of work that went into the images but they will steal and erase them to get the $100 a DSLR brings from their drug dealer.

At the end of every day we create a directory tagged with geographic and activity or event identifiers on our laptop and dump data from every device we’ve used that day into the folder.  That often means two super zoom cameras, an underwater camera, a microscope, a GPS tracker, a drone and a GoPro gimbal stabilized video camera.  Some devices have direct wi-fi and others require a card reader or cable.

While we’re hanging out by the pool or having drinks in the bar we usually keep the laptop open to trim video, select, tag, geocode, edit and caption photos, clean the noise out of tracklogs and write notes or article snippets.  The more of this sort of processing we can do while it’s fresh the better but minimally everything has the directory keywords, date and location associated as reminders.

Lastly we copy the whole directory onto a micro-sd. Previously we used external hard drives but the micro-sd is a quantum leap improvement – temperature resistant, waterproof, shockproof  – and they’re super cheap at only $0.12 to $0.20 per Gb in sizes up to half a Tb.

So at the end of every day we have three copies of everything.  Copy #3) The micro-sd’s tiny size means it’s easy to stash in an impossible to find hiding spot, copy #2) the computer goes into the safe or other secure location, and copy #1) the originals in the camera, drone etc. usually accompanies us wherever we go.

The surest way to prevent work product loss in Costa Rica is to get it out of the country. Dropbox and other cloud storage systems are more or less foolproof with the main downfall being data transfer speeds.

The majority of Costa Rican internet connections are not sufficiently fast to rely on using cloud storage.  Daily local backups and editing not only provide security but filter out many Gb of duplicate/bad photos and shrink video by editing so a much smaller package can be uploaded to the cloud every week or so when we have a fast connection.

If you’re not generating much content (less than 100Mb per day) or spending time in remoter natural areas then just dumping stuff to the cloud without the intervening steps may work for you.

Unlike typical tourists entrepreneurs may have several tens of thousands of dollars worth of drones, cameras, lenses, binoculars, scopes, gimbals, tablets, tripods, underwater housings, computers, phones and other gear.  For example since we also work as cartographers we schlepp around high sensitivity GPS equipment and antenna arrays.

If a Pelican case full of specialized gear walks off in the middle of an expedition you’re probably out of luck. A trip to San José and a week searching for a chance to pay 2-3 times higher price might get you back to work.  However high end equipment may not be available in Costa Rica at any price and you may end up faking it with your i-phone or bailing on the project. 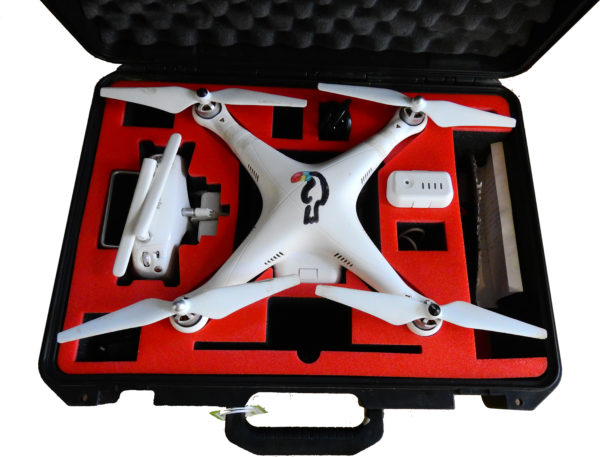 After reading what we do to protect our data it should come as no surprise that we exercise similar extraordinary paranoia to safeguard our gear.

However, after we tell you that there are ladrones that commute from San José to the beaches and national parks and the police and courts know all about it and do nothing it shouldn’t surprise you that the best you can hope for is to postpone the inevitable – so BACK-UP!

When we’re not working we prefer hostels, cabinas, B&Bs or even tents but when we’re dragging around the equivalent of 10 years local salary in equipment we buy more security whenever we can.

There are four things that work in your favor at properties in the $300 a night and up price range when compared to $30 a night.

If there’s no room safe and no electronic security we usually carry a beat up old backpack worth about twenty grand around with us.  We watch it every second.

Eventually someone is going to ask us if they can have it and we’re going to have to say yes.

Never leave anything out of reach.  Never in a car, on a table, on the back of a chair, not in a lobby, and never on the beach.

We put small waterproof stickers with our name, address, local and international phone numbers, and e-mail address on, and in, everything.  It’s improbable that a stolen camera will be returned but a misplaced one might.

Also a lot of things like passports, notebooks, credit cards and even phones with unbreakable security have little or no value to most thieves.  They aren’t connected to international crime syndicates that buy passports to smuggle spies across borders.  They usually just toss everything that isn’t cash or easily fungible.

If it’s easy for the finder to get in touch they often do.

Despite precautions theft is inevitable in Costa Rica.  In just shy of 30 years we’ve been robbed twice.  Actually that seems pretty reasonable with the large quantity of targets we carry, the amount of time we’ve spent traveling (increased vulnerability) and considering we’ve known others who’ve been robbed twice in 30 minutes…

The first time was in Monteverde at the Children’s Eternal Rainforest offices.  I was inside for less than 10 minutes and every door on my SUV was reamed (they use a tire iron with a modified end to basically shred the lock cylinder in seconds…it’s faster than a key).   My backpack of gear was on me but the mapping GPS had apparently slipped out of a pocket in the car because one of the thieves had it as they roared off on a motorcycle.  This happened before GPS was common so they probably didn’t even know what it was – $1,000 damage to the vehicle, immense headaches for work and they got nada.

The second time was at a luxury beachfront boutique property on the Pacific side.  I was sitting in the living room watching whales in the waves just beyond the patio.  I walked to the bathroom at the back of the room and in the 3-5 minutes I was gone someone came in, snatched the binoculars and a GoPro off the table and disappeared.  They must have been literally hiding in the bushes watching for an opportunity.

Travel insurance covers property loss but be sure to read the fine print and understand the coverage limits which are often around $1,000 per occurrence and sometimes specifically exclude jewelry, cameras and electronics.

Some credit cards include buyer protection programs that refund the purchase price if something you buy on the card is lost, stolen or destroyed in the first 90 or 120 days.  As with travel insurance per item and per incident limits apply but whenever we’re getting new gear we wait until the last minute before the trip so it’s covered while we travel.