Update April 1, 2022 – Several companies have begun offering just proctoring services so travelers can use any approved test including those purchased in drug stores and the ones sent out for free by many U.S. states and the federal government.

Three of the “Do It Yourself” antigen tests that are approved for consumers are Abbott Labs BinaxNow, Ellume and Quidel’s QuickVue. 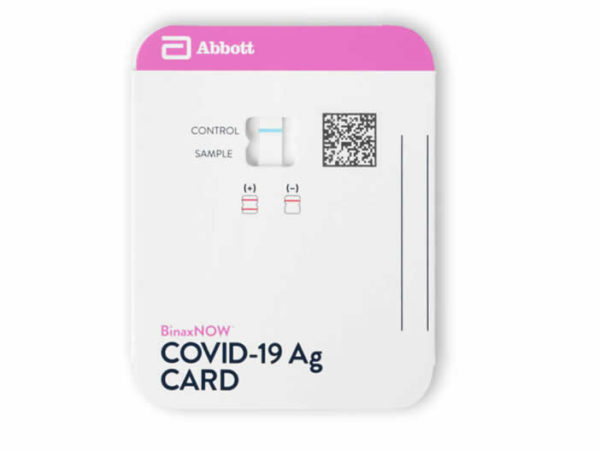 Travelers have told us of using “faked” or shared prescriptions to obtain and use home tests sold by eMed for $150 +$29 overnight shipping for a sixpack ($30 each).  Prices are even higher in Costa Rica where the rapid antigen tests are currently only available through clinics and med labs for $43 to $85.

Dr. Michael Mina, a Harvard epidemiologist is quoted in an NPR interview saying that “$7 or $8 [per test] is still too much money” but as manufacturers begin to compete and more employers begin to require tests the retail price should drop even further.

Rapid antigen tests are one type of “viral” test that has been approved by the CDC for international travel.  In fact Abbott BinaxNOW is the exact same self test used by thousands under the eMed brand to fly to the U.S. from Costa Rica.

Results from the $7.50 over the counter tests sold in supermarkets and pharmacies can be shown to airlines for boarding by purchasing a separate service for online proctoring.

The Ellume test uses a small bluetooth reader (included) to transmit results to a phone app.  eMed used an app called NAVICA combined with a live person who watched users take the test and read the results via video chat.  In this era of apps it’s easy to overlook the simplest solution of just showing the actual test card when checking in for a flight.

The Evolution of Self Tests in International Travel

It’s been a long strange trip to get to a reasonable solution for Covid testing in travel.  When the CDC first announced the testing requirement some people were stuck paying as much as $250 and waiting two days for results from rtPCR tests.  Now prices are below $10 and results take a few minutes.

Update March 28, 2021 – although there has been no change in the FDA emergency approval eMed has eliminated the banner stating that their test kits “are NOT APPROVED for international reentry requirements.”  Travelers continue to report that this is the fastest, easiest, cheapest, most convenient way to obtain a negative test result to fly to the U.S.

Although their website still has a pop-up implying that the test could be used for international travel and you should check with your airline, they have also added a fine print banner on the order page with the above quoted text.

Despite changing the rules without warning eMed is not providing refunds (the only permissible reasons for refunds are lost or damaged in shipping) and there is a growing marketplace on facebook for tests that travelers can’t or don’t want to use.

Two Different Realities for Self Testing

Eight weeks ago when we heard about the United Airlines partnering with eMed to provide a $30 home test that could be carried by travelers and used to return to the U.S. we wondered how they were getting around the FDA requirement for a prescription but thought it was a great option if they could make it work.

OFFICIALLY – eMed states that their test kits “are NOT APPROVED for international reentry requirements” and that it is prohibited for the person who obtains the required prescription to order a sixpack (the only packaging option) to share the tests with anyone. United and other airlines have deleted all mention of the test.
UNOFFICIALLY – travelers report every day that they are splitting up and sharing the sixpacks, taking the test online in Costa Rica and using the results to return to the U.S. on United, Delta, American and other airlines (only one passenger on Copa has reported being rejected). eMed has not yet added the “NOT APPROVED” disclaimer to the test results.

Here’s what we know

As recently as this morning travelers who already have the kits reported the test results being accepted by airlines.

Fortunately, there’s an alternative.  A number of Costa Rican labs and hospitals have begun offering antigen tests for as little as $40 with results in 1-8 hours.

The airlines are officially in charge of checking test results and deciding who flies to the U.S. and who does not.  No guarantee, but reports from returning travelers indicates that if you have any test result bearing your name, a date within 3 days and the word “negative” it is accepted with no questions by every airline.  – March 24, 2021

United – the only airline that ever definitively stated Home test results are accepted is now making no comment.  Travelers have returning from Costa Rica on United flights confirm this.

Delta – although Delta has not posted an official announcement we have confirmed over 20 first hand accounts of using the home test results to board Delta flights departing Costa Rica.

Alaska, and American Airlines have published statements that travelers “will be able to use antigen home tests”  Note the future tense; it does not say “are able.”

Several other airlines have made vague non-committal statements in customer service chats and calls but have not committed to officially accepting the results.

Spirit and Sun Country are the only airlines we’ve seen making a definitive statement that they will not accept self tests, only lab tests.

Update July 31, 2021 – eMed users are complaining about waits of 2-3 hours even in the middle of the night.

Update July 15, 2021 – eMed users have recently begun experiencing long waits for a proctor to monitor their test during busy times.

Update April 20, 2021 – the price is a bit higher ($11.99 each) than first announced and it’s not clear how the results will be presented to the airlines (photo of test card?) but the kits are available at Walgreens and CVS pharmacies today.

You must purchase the same test from eMed where they include an app to monitor use and report results digitally.

Update April 1, 2021 – the FDA announced the approval of Abbott’s BinaxNOW rapid antigen test kits for over the counter sales.  Kits will be available in U.S. drug stores in the next few days for about $15 for a two pack ($7.50 each).