You cannot account for all the possible variables when choosing the best timing for a Costa Rica vacation – rainy vs. dry season, micro-climates, weekend beach traffic, school vacations (both in Costa Rica and at home), turtle nesting and hatching seasons, flight schedules and costs, and many more – but there’s one variable you probably haven’t thought of that’s worth taking a few minutes to learn about – la marea.

Knowing a couple of simple things about tides makes it easy to adjust your beach schedule to avoid disappointment or being marooned.  The first thing to know is there is one high and one low tide during the day plus one of each at night.  Second, the maximums are about an hour later every day.

Even if all you plan to do is lounge in the sun drinking piña coladas you may want to take a peek at the tide tables.  Many beaches get very thin or disappear altogether at high tide or you may have to hike over a quarter of a mile from the water to the bar to get a refill at low tide.

There are two ways to plan around the tides.  First, you can arrange your day taking the tides into account.  “On Thursday if we zip-line in the morning we can always kayak the mangroves in the afternoon” works as long as low tide is early morning.  Otherwise you’d be trying to paddle across mud flats.

Second, you can arrange the order of your itinerary to match the favorable tides.

Tides follow the position of the moon shifting 50.4 minutes later each day with the lunar cycle.  That means it takes about a week for high tide and low tide to switch positions on the clock.  If high tide is at noon one Monday then low tide will be around noon the following Monday.

This conveniently means that there will be the perfect alignment of the right tide with the right time of day for any chosen activity at least once every week of vacation.

In reality unless we’re doing something extremely tide dependent like a long trek in Corcovado we don’t worry about scheduling the whole week around perfect timing.  We will re-schedule a Stand Up Paddle board lesson a couple of days earlier in our beach stay to hit a lower tide and smaller waves though.

When is it High? Costa Rica Tide Chart & Calendar

In order to adjust your plans you’ll need to know when the tides are high or low so we maintain a handy calendar with an integrated tide table for the upcoming year. 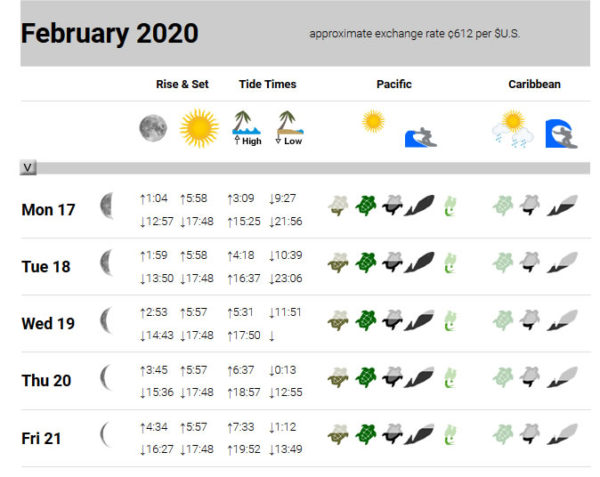 The high (↑) and low (↓) tides for each day are shown are shown along with all the other info you might need to plan travel.

Only on the Pacific

Here’s a bit of trivia – there are no tides on the Caribbean side of Costa Rica.  None is a bit of an exaggeration but they are very small, on the order of a few inches rather than feet.

A number of factors conspire to minimize the rise and fall in the Gulf of Mexico.  The most important is the relatively narrow opening into a large Sea.  The tidal bulge comes from the east following the moon and as a high tide propagates across the Atlantic from the shores of Africa it’s reflected back by Florida, the Yucatan peninsula and Cuba blocking the mouth.

Another factor is the length of time it takes for a wave to travel through the ocean.  Coincidentally, because of the distance the high tide wave that starts off the coast of Africa arrives in the Caribbean just as the local tide is low and the two cancel each other to some extent.

And then there’s the shape of the Gulf itself.  The swells that do manage to form are soon reflected by a beach and slosh around in the bowl canceling each other out.

The tides may be much smaller in the Caribbean than the Pacific Ocean but it’s still possible to get pushed uncomfortably up off the beach.  If you plan to do a long hike on the Caribbean (Puerto Viejo to Manzanillo is highly recommended) you should at least ask locally about points that might be difficult to pass.