Everyone will tell you “NEVER leave your stuff unattended on the beach” and the same warning applies when swimming under a waterfall or rope swinging into a river etc.  What no one tells you is how to accomplish that.

(Skip down to Good Ideas)

“Oh, there are people around, no one will bother our stuff if we don’t go too far” – Bad Idea.  We met a Dutch couple in Playa Cocles who lost a phone, a camera and the cash they planned for drinks and dinner while getting their feet wet.  They never saw anyone and swore they were never more than 50 feet away from their towels.

Hide it – Bad Idea.  Unfortunately the ladrones (robbers) are probably watching and know every trick.  Ziplock buried in the sand, wrapped in a diaper, in the engine compartment instead of the trunk, in a hollow drift log, etc.

Admittedly, hiding it is better than leaving it in plain sight but only a little bit.

Lock it in the car – Bad Idea.  You might as well bury it in the sand.  They can jack the door or trunk of your car with a pry bar, clear it out and be gone in under 60 seconds.

As we pulled into playa Sombrero near Cabo Matapalo on the Osa we saw a guy reaching through the smashed window of a Land Rover as three other guys sprinted up the beach to try to catch him.  Of course the thief knew precisely how long it would take for the pissed off Gringos to reach him and darted down a trail through the trees before they were close.

Unfortunately the tourists had just made a quick stop to look at the surf waves on the way to their rental house and had a lot of stuff in the car.  From what they said they lost at least their passports and quite a bit of cash (there are no ATMs in the area).  When we left they were still trying to figure out which cameras, credit cards and i-pads were missing and whether they could get a refund on the rental house since they’d all be spending the next few days in San José replacing passports.

A table at a beachfront restaurant – Bad Idea.  A few beaches in Costa Rica have restaurants or bars right on the sand (Samara is our favorite).  While it’s a great idea to get a table you cannot leave your stuff there.  It’s easy to get a false sense of security from all those tourists at other tables and waiters coming and going but the thieves will casually walk off with your stuff just the same.

Some beachfront restaurants have small lockers (see below under good ideas) or will keep things behind the bar for you.

Stay at Sand Dollar Cove. Our favorite beachfront rental house is just above the high tide line and has a big steel door bodega where we leave our valuables 50 feet from the water.  Cheo the caretaker is omnipresent and has never let us down even when we leave the doors hanging wide open and we’re out on the waves.  There aren’t many truly beachfront accommodations in Costa Rica but if you can find one then security and convenience (a bathroom right there too…) is a big advantage. 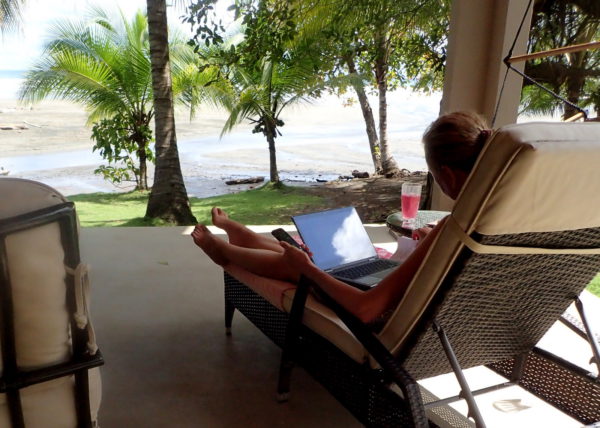 Unrelenting attention to your stuff.  Yeah it’s a bummer but if you’re going to have a big pile of valuables on the beach you have to assign someone to guard duty.

Along the same lines we’ve had good luck asking innocuous looking tourists on the next towel over, “Hey, are you going to sit here for a while?…would you mind keeping an eye on this?” then putting our stuff next to them.  Most people will say yes to be nice but they’re probably not going to stick around for hours and miss their surf lesson for your sake.  We only do this if we want to jump in the water for ten minutes to cool off.

Lockers.  The Leyenda Hotel is in the forest a couple of km from Playa Carrillo but they have a unique trailer that they pull down to the beach each morning to provide lockers, boogie and surf boards, fresh water showers, toilets and a bar for their guests.  Nice.

There used to be a converted school bus on Playa Palo Seco that did the same thing (with emphasis on the bar) but we haven’t seen it for a while.  If someone wanted to start a low capital investment business they’d start renting lockers in trailers on the busy beaches. 50 lockers x $5 each is $250 a day.  By comparison the rental car agencies only get $50 a day for an SUV and they seem to make pretty good money… 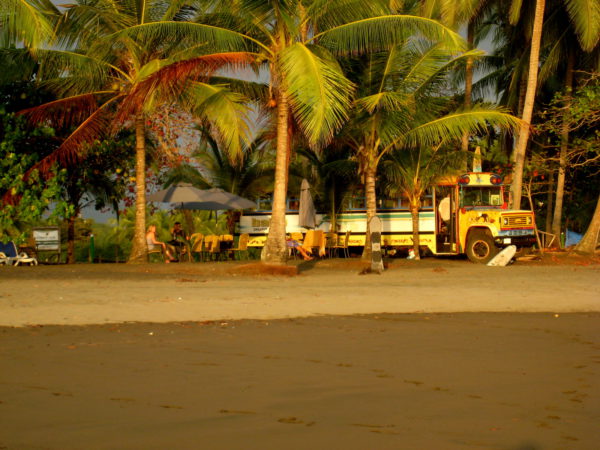 Take it in the water with you.  Money, credit cards and driver’s licenses are all waterproof.  Just put them in a (zipper or good velcro) pocket.

You can also get other things in waterproof versions like cameras and phones.

Car keys are waterproof and some lock remotes are too.  Other remotes are detachable (separate key and fob) so you can lock the remote in the car and just carry the key in your (zippered) pocket.  Check each door individually when manually locking.

Even if you can figure out how, do NOT lock a keyless entry/start fob inside the car or someone will smash a window and drive off with the car.

Using a ziplock bag to carry non-waterproof phones, cameras, vehicle remotes etc. into the water is a Bad Idea. If you’re going to try to keep expensive stuff dry pay a visit to a rafting or dive shop and spend the money on a professional grade container.

Let the Guide Carry It.  Some canyoning, rafting surfing and other water sport tours will provide a dry bag carried by the guide or lashed to a boat etc. where you can stash your stuff.  You can pull your camera out when you break for lunch but don’t expect the guide to get it for you every five minutes…