The main reason we made this the last stop on our tour of the Osa was that Meghan and Ryan had never been to the Isla del Caño Biological Reserve.

The easiest access to the island is from the boat in lodges along the section of the coast stretching from Drake Bay past Punta Río Claro and along Playa San Josecito.

Corcovado Adventures Tent Camp Lodge sounds like the name was created by an SEO (Search Engine Optimization) expert trying to cram in as many keywords as possible but fortunately it really offers all that.  There are no lodges located within Corcovado national park but you can visit by boat so we’ll forgive then for tossing that one in the mix.

Unlike at La Leona, Tent Camp is a pretty descriptive name here.  Large cabin tents are set up on platforms under shade/rain flies and the bathroom facilities are attached to the cafeteria/common area building.  Don’t get me wrong it’s a great spot to explore the northern Osa Peninsula it just doesn’t have “Luxury” before tent camp in the name like La Leona does.

It was already dark by the time we made our way from the airstrip at Drake to the beach where the boat picked us up to motor around the point at Río Claro and deposit us on the beach in front of the tent camp.  The boat out to the island was scheduled for dark o’clock in the morning so we had a quick late dinner and hit the cots.

Sue and I had visited Caño previously and loved it but this trip turned us into die-hard Isla groupies.  The weather couldn’t have been more perfect and it had been for several days so the underwater visibility was excellent.  And the whales were out.

The ride across the Bahía de Coronado from playa San Josecito is quick.  About twenty minutes compared to the hour and a quarter we spent in the boat when we’d visited from Ballena park near Uvita and the two hours or so for visitors embarking at Quepos or Manuel Antonio.

The boat ride can be part of the fun as we discovered on the way back so the biggest advantage to starting out nearby is that you arrive before everyone else and can stake out the best picnic spots in the shade and snorkeling reefs offshore.  It also gives you more time on the island which you’ll need if you want to hike any of the trails (when they are open, see below).

In the high season (Dec-May) the water around the island is relatively calm although never glassy smooth like some spots in the Caribbean islands.  Many of the snorkelers who were not strong swimmers donned life vests and snorkeled from the beach, working their way along the surface peering down (don’t forget your sunscreen!) in the shallows.

We checked out the area around the beach quickly and there was a lot to see but our guides said it was much better from the boat.  We went out to some of the deeper water and larger rock and reef formations on the eastern end of the beach and were rewarded with a few open water species like sharks, jacks and rays as well as the colorful reef residents.

You can imagine just how good it was in person when you know that these photos were taken with a little point and shoot waterproof Olympus pocket camera.

After a couple of hours in the water we were definitely ready for lunch which the outfitter provided set up on picnic tables in the shade above the beach.

There are a couple of steep but pretty decent trails above the beach.  One crosses the island to a mirador  where you get a beautiful view of the rocky south shore of the island and punta Leona back on the Osa peninsula.

The other choice is a loop that cuts east from the mirador trail and takes you past several “mysterious” stone spheres of various sizes as well as a couple of burial sites, a couple of very faint petroglyphs and some other shaped stones or implements. 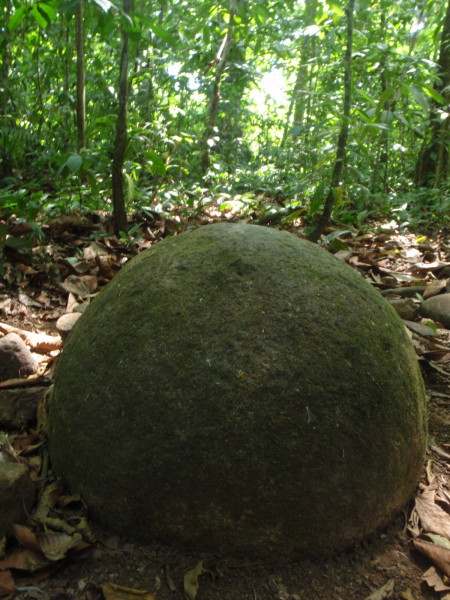 None of the artifacts are marked or annotated with signs so you’re on your own for interpretation.

The total time for both trails without too much dawdling for photos of the incredible trees and wildlife (mostly birds) is about 2 hours and that’s a good number to know because you’re not allowed to stay on the island at night and boat captains aren’t usually too understanding when their orders are ignored.

We were happily exhausted from all of the sun and fun by the time we collapsed on the seats of the launcha for the ride back to the tent camp but we soon got a shot of adrenaline when someone spotted a dark spot on the horizon and cried out “whales.”

Whales are almost always a potential bonus on a snorkeling trip to Caño because two different populations of humpbacks head to Costa Rica to calve in the warm waters around the Osa during their respective winters (California – Dec. through Apr. and Antarctic – Jul. through Nov.).

This was a mother and calf from California (it was February) and the calf was already at least four meters (13 feet) long.

We putted slowly in parallel with them for about 20 minutes as they cruised south.  Whaling prohibitions must be having a positive impact because they seemed totally unconcerned by our presence.

We had one more gorgeous sunset ahead of us then after another night at the tent camp we boarded the little NatureAir 18 seat prop plane (which seemed like a 747 after the Cessna bush plane we arrived on) and headed back to San José.

Meghan and Ryan had to get back to playa Hermosa and their new business planning Costa Rica weddings (their own nuptials a couple of months earlier were fantastic and generated so much buzz they just had to start helping others).  Sue and I had to hit the road for five weeks updating the map for a new edition.

The island used to be a stand alone biological reserve but if we understand what the rangers told us it has been absorbed into Corcovado national park.  Either way it’s worth a visit if you can.

Permits are required to approach or land on the island but we don’t know the mechanism for acquiring them.  We don’t have a boat of our own so we’ve only visited in the company of guides who take care of the paperwork as part of their fees.

Regulations for visiting the island are quite unpredictable and seemingly arbitrary at times.  There was one closure of several months when the septic system caved in but at other times the trails, the beach and even the reefs have been declared off limits seemingly without reason.