La Leona tent camp is highly recommended for anyone who’s looking to get off the beaten path.  You don’t have to walk across the Osa Peninsula to get there but it is a great way to arrive.  You do have to walk approximately 1.6 km along the beach from Carate but you can arrive there by more conventional means.  Charter flights land at the airstrip and you can drive the rough 4WD track from Puerto Jiménez to the end of the road at the soda that serves as an airport, or even catch public transportation in the form of a collectivo truck that departs each morning.

Tent camp is a little misleading if you don’t add the adjective “luxury.” Leona is a very nice place in an insanely beautiful location.

I’m an early riser and the full moon was out and almost as bright as the sun on a cloudy day.  I walked a couple of miles before sunrise then shot the video below of the full moon sinking to one horizon and the sun just about to pop over the other.

Moonset and sunrise over playa Madrigal in front of La Leona

After hot showers and lounging around in the lap of luxury for as long as we could stand it we went out for a hike.  There are a couple of trails up the hills behind La Leona and we headed for the mirador at the top.

Toucans were calling and hopping from one tree to another as we climbed and Ryan saw a small cat – no not a domestic kitty – of some sort disappear into the shadows.

The trail near the top strategically curved to reach an opening where a natural tree fall had left a gap and we finally got the view of the coast from above that we’d been hoping for earlier on the ridge between Piedras and Carate. 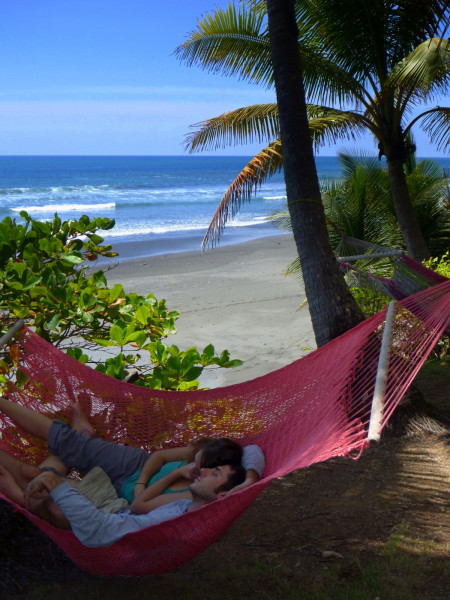 We found dozens of poison dart frogs hunting the termites that were slowly devouring the wood of the five foot diameter trunk from the tree that came down to create the gap we took the beach photos through.  We posted the video of Dendrobates auratus on the Osa/Corcovado regional page because we were running out of room on this post.

The rest of the morning we lounged around in hammocks which is much more fun to do than write about.  Around 1:00 we loaded up our packs to set out for the airstrip.  A few days earlier we’d chartered a plane from Alfa Romeo to take us to Drake Bay at 4:00.

Edwin would stay in the plane when it headed back to Puerto Jiménez where it was based and where he could catch a bus to the international airport for a flight back to the Netherlands. We were sad to see him go but his partner Marloes was very pregnant with their first child and anxious to have him home.  It was a girl ;-)

We should have rolled out of the hammocks earlier because we kept getting distracted by the wildlife along the beach.  Usually afternoons are pretty quiet and all the animals are taking siestas in the hottest part of the day.  They must have known we were in a hurry because they put on quite show including the yellow legged hawk in the video below fishing in the tide pools.

It was becoming a theme of the trip that no matter how good the next destination sounded we were having a hard time dragging ourselves away from where we were.

The flight to Drake was spectacular as are most flights we’ve taken in Costa Rica. The logistics don’t always work out well to try to fly around this tiny country but sometimes like in this case it was perfect and if you ever get a chance to fit it into a trip there are a few flights that are very much worth taking.

It was fun to get an aerial view of the mountains we’d just crossed over and the beaches between Madrigal and Sirena that we’d walked on previous treks. As cartographers it was especially neat to see Lago Corcovado from the air because when you’re slogging through the ankle deep muck and head high vegetation on foot you don’t get any perspective.  The late afternoon light was perfect but the sun on the windows made photography tough. We’ve included a few shots from the air anyway.

At the airstrip we were joking that this was just my carry on luggage which was technically true. The little bush plane charter doesn’t have a cargo hold so carry on is the only kind of luggage there is…and no it’s not really all mine – it’s parts of everyone’s gear.

When we landed at Drake there was supposed be a transfer waiting but communications had broken down and we ended up calling a jeep taxi to get down to the beach where a boat was waiting to take us around the point to the Corcovado Tent Camp Lodge.