In a “free” economy a big decrease in the value of the local currency would mean big savings for international travelers.  However Costa Rica is a special case and savings are unlikely.

Residents receiving paychecks in local currency experience marked increases in costs. However, tourists are not likely to see decreased expenses.  Many travel related things like hotels, lodges, tours, activities, beach bars and restaurants are already in U.S. dollars so the value of the colón has little impact on international vacation prices.

Nearly instant inflation corrects the cost of any tourist related articles that are priced in Colones if there is a significant currency devaluation.

In fact prices for international travelers will probably go up.

September 2019 – Colón Back Where it Started

Back in August 2018 the national strike accelerated inflation and devaluation of the currency as values plummeted more than 5% in a few weeks. 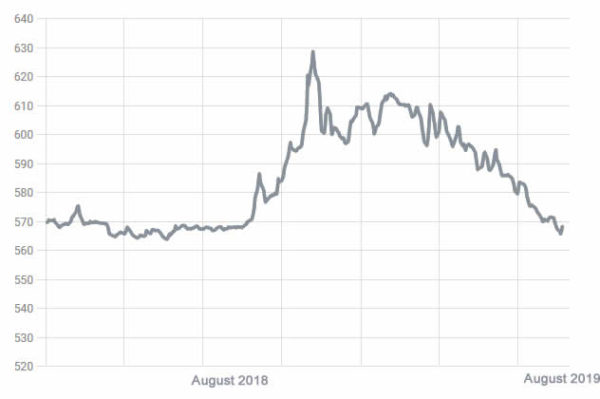 The president of Costa Rica’s central bank has stated that the massive drop in the value of the colón relative to the U.S. dollar is expected to continue.  The Costa Rican currency lost nearly 10% of its value in February 2014 and extrapolating that rate of decrease would mean that by the Christmas high season it would be worth less than half what it was at the beginning of the year.

This created some tiny bargains – for example the cost of a public bus from the airport to downtown (¢650) would drop from $1.30 to $0.85 in U.S. funds – but most travel costs would stay the same or even increase.

Out on the tourist trail nearly all hotel rooms, tours and meals are priced in U.S. dollars and therefore not affected by the value of the colón.

That’s a pretty simple explanation for why prices would stay the same for international travelers but doesn’t explain why costs might actually rise.  To understand that you need to know that 10-60% of the income for a travel related business in Costa Rica comes from domestic travel.

The vacation purchasing power of an average Tico’s paycheck fell by 10% in just four weeks at the beginning of 2014 because salaries are in colones but the rainforest lodges and beach resorts charge dollars.

When Costa Rican’s cancel or severely curtail their travel plans a common reaction in the tourism industry is to raise prices (in dollars) and charge foreigners more to make up for lost local revenue.

A decrease in the number of local travelers could mean that the dollar, euro and other foreign currencies could be worth 50% more at the exchange counter by 2019 but still buy less at hotels, restaurants and tour operators.

If you’re planning on spending foreign money on travel in Costa Rica now may be the best time to make your reservations and lock in prices.