…reprinted from CostaRicaTop10 with permission of the author and publishers…

Ninety nine percent of the time the right answer to the question “What’s the best airport hotel in Costa Rica?” is “none of them.”

It’s quite apparent to most people that a bungalow on the beach or volcanic hot springs resort in the rainforest is better than a sterile cookie cutter room at an airport hotel.

When they see the limited choices near Costa Rica’s airports the alternatives look even better.

What Time Should My Flight Be to Avoid Getting Stuck at the Airport?

If you want to avoid staying in an airport hotel you need to plan your arrival early enough to get somewhere else. We recommend arriving no later than 5:00 pm (3:00 pm if you’re renting a car instead of shuttles – don’t drive after dark) for nearby destinations. To reach a destination two to three hours from the airport arrive by 2:00 pm (noon for car renters).

To avoid airport hotels on the way out you need to depart late enough that you can get from the beach or volcano to the terminal at least 2.5 hours before your flight (add an hour if you’re dropping off a car).  We’ve managed this for flights departing as early as 7:00 am but had to get up seriously early, were only an hour away at Playa Hermosa, and barely made the flight.

Arriving at either airport plan time for:

So if you’re lucky and decide not to futz around you could be in a tourist beach shuttle 30 minutes after touchdown. If you’re unlucky, absolutely have to shop, and are renting a car you may not be on the road for two or three hours. We don’t mess around and typically are driving off in a rental car within an hour and a half even with some lines at immigration.

Departing from either airport plan time for:

You must be checked in, holding a boarding pass, with your bags tagged and on the conveyor belt one hour prior to your scheduled departure or they will turn you away and you’ll have to wait for the next flight. This means getting to the airport any less than an hour and a half before your flight is very risky indeed.

Our Southwest tickets include the departure tax, we have preferred status for check-in (gotta love those miles), and are pretty casual about getting bumped or missing the flight because we always have more to do in Costa Rica. Even with all of that going for us we try to arrive 1.5 to 2 hours early.

The airlines recommend arriving 3 hours prior to your departure so any flight that leaves before about 9 am is going to mean getting up really early (even if you’re staying at the airport).

Like I said at the beginning ninety nine percent of the time the best airport hotel is no airport hotel, but if you’re part of the one percent – if you have meetings in San José, if you want to see the city and enjoy the restaurants – the best hotel options are listed below.

There are basically two options.  Stay very close or risk missing your flight due to ridiculous traffic.

Stay really close to the airport

Just across the highway from Juan Santamaría airport the Holiday Inn Express and the Hampton Inn are exactly what you’d expect and cost about what you expect.  They share a parking lot with a Denny’s and a Rosti Pollo chicken restaurant (which each have prices similar to what you’d expect to find inside the airport) and basically serve as really comfortable waiting areas for your flight.  Both have reliable frequent shuttles and bag breakfasts for travelers with very early fights.  Boring, predictable, reliable – in short perfect airport hotels.

These are the only two major hotels close enough to be called airport hotels.  There are a couple of local offerings within another km on the roads to the coast, Alajuela or Heredia but honestly we’ve tried them an haven’t found anything to recommend.

Stay sort of close and take the risk

San José traffic can be absolutely unbelievable (trust me I lived in New York for four years).  We once left three hours early for a meeting 15 km (9 miles) away and were an hour late.  If you’re not literally right across the street from the airport there’s a finite chance you could miss your flight due to traffic.

That said there are three basic choices.  Cariari is a golf community about half way between the airport and downtown (12 minutes without traffic) where you’ll find the Wyndham Herradura (nice spot, good breakfast, and some nice experiences but the last two times the rooms weren’t ready at 5:00 p.m. and service was horrible), and the Doubletree Cariari (older property but still up to Doubletree standards) on the frontage road of the Pan American Highway.  A bit further towards San José are a couple of nice mid-priced options the Country Inn and Suites and the Adventure Inn.

The second option is a bit further away and riskier from a traffic perspective because you’re on the wrong side of the Virilla river and there aren’t many bridges – Escazù (25 minutes without traffic).  This is Costa Rica’s expat enclave, business center and Rodeo drive rolled into one.  Here you’ll find new modern chain hotels and shopping centers.  There’s another Holiday Inn Express, Courtyard by Marriott, Wyndham Garden, and a fun newcomer (and our personal favorite) to the executive hotel arena, Aloft from Starwood Hotels.

Downtown San José is also about 25 minutes from the airport (without traffic) and by far the most interesting option.  Some grand old colonial hotels including the Gran Hotel de Costa Rica and the Grano de Oro add flavor to the Raddisons, Holiday Inns and Best Westerns.  One of the main reasons for staying in the capital is that most of the best restaurants in Costa Rica are here.

Even the government and tourism board realize it’s a good idea to get out of San José and have proposed construction of a new airport 20 miles west at Orotina outside the zone of perpetual traffic jams.

There’s only one choice. Seriously.

It’s such a good idea to head the beach instead of staying near the airport that there is literally only one hotel – The Hilton Garden Inn. 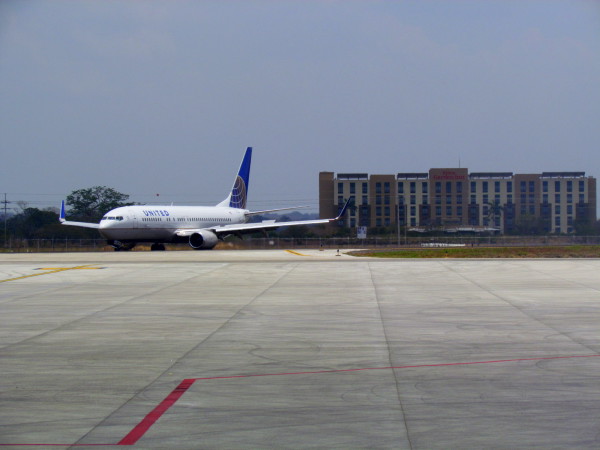 People often ask us “But what about staying in the city of Liberia?” There are a few hotels in Liberia ranging from backpacker’s to mid-range but it’s 20-30 minutes away and not particularly fascinating. You may as well drive another 30 minutes to the beach or Rincón de la Vieja volcano or other more interesting destination.

We’ve found good reason to stay here a couple of times (once we had to wait for a truck to arrive to pick up our “luggage” because we were using our duty exemption to help some friends by importing all the climbing gear for their new canyon tour, the other time we got a very early morning flight direct to Denver for only $79 and we couldn’t pass it up). It’s great as airport hotels go. The breakfast buffet is excellent, the rooms are very quiet and comfortable, the pool is nice if uninspiring and the rates are usually pretty reasonable.

We know when you’re stretched out in the sun on the beach it’s tempting to say “I wouldn’t mind missing my flight and getting fired for not showing up for work so I have to stay forever.” but think it through…

By all means stay if you really want to but if you’re trying to make your flight we recommend arriving at the airport about 3 hours prior to departure.  If you plan your flight times and arrange your itinerary correctly you can still spend part of that last day on the beach instead of an airport hotel.

The same goes upon arrival.  If you arrange your destinations right you can head straight to the volcano when you land.  Sometimes avoiding a stay at the airport means flying into one airport and out of another – plan wisely.

If you mess up your itinerary and have to stay at an airport hotel bite the bullet, give up on any romantic notions of exploring the city and just stay across the street (at either airport).

Car rentals chew up quite a bit of time at the airport so if you’re cutting it close consider a chauffeured shuttle instead and pick-up (or drop-off) your car the next (or previous) day at a beach or rainforest eco-lodge.

Depending on where you are this may actually be cheaper as well.  You’re deleting a day from the rental contract and there are extra fees added to cars picked up at the airport.  For more remote locations rental agencies will charge a fee for delivery but sometimes it’s worth it.