Can you spot what’s wrong with this receipt? 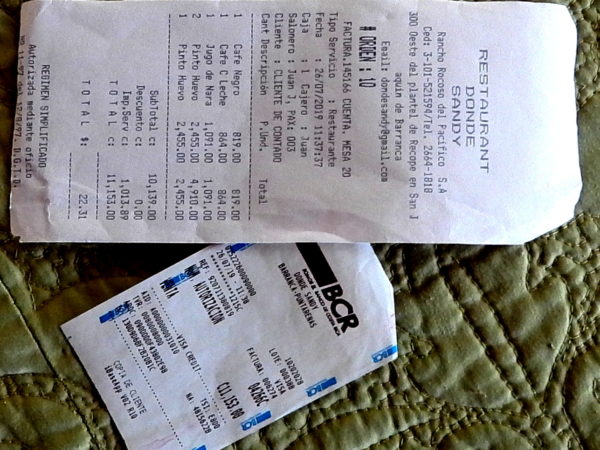 It’s not obvious but if you look at the two totals at the bottom of the itemized receipt you’ll see ¢11,153 in Costa Rican Colones and $22.31 in U.S. dollars.  That works out to an applied exchange rate of five hundred colones per dollar which is 18% to 23% worse than the official exchange rates during 2019.

As you can see on the lower receipt we insisted that they charge us in Costa Rican Colones not dollars.  On our credit card statement the next month the total was $18.97 instead of $22.31 after VISA converted the amount at the official rate.

In the past we’ve seen this sort of “rounding error” in cash transactions where the staff might have to do the math in their head.  Using an exchange rate of ¢500 instead of ¢585 is much easier because you just double the colones amount and drop the extra zeros… ¢11,000 becomes $22.  That’s why we have always recommended that for cash transactions travelers should pay in Colones when the price is posted in Colones and pay in U.S. dollars when the price is posted/tagged in dollars.

On our last visit the second half of 2019 the practice seemed to have exploded.  Nearly every receipt we received was in dollars and over half of them attempted to overcharge us by 10-25% either using an unrealistically low exchange rate or with the more institutionalized “dynamic conversion.”

The extra 20% or so could easily add up to hundreds of dollars for a family vacation.  We recommend getting a “no international transaction fee” credit card and insisting that if the menu prices/price tags are in Colones your card is charged in Colones.  Credit cards have better exchange rates than banks or foreign currency sellers in the airports etc. so if you have a no fee card you’ll get the most for your money.

If the menu prices/price tags are in dollars it’s better to have the credit card charged in dollars if it’s a U.S. card.

If you’re from Canada or Europe it’s complicated by a third currency.  You’ll just have to do the math and decide if the exchange rate being applied is fair and whether it’s more favorable for the transaction to pass through dollars before you pay the bill in your own… cash might be easier.