The new banknotes are so attractive they even made Time Magazines “most beautiful” list.

Costa Rica’s currency, the colón (colones plural) currently exchanges at around ¢580 per US dollar (Exchange Made Easy).

In 2014 it took a wild ride losing over 10% of its value and dropped over 5 % in a few days in 2017 but in both case the banks stepped in to stabilize the currency.

Since the “adjustment” the exchange rate has stayed around ¢575 per dollar.

In 2018 a combination of tax reform legislation and a national strike put strong downward pressure on the colón and despite over a billion dollars worth of intervention by the central bank the value dropped to ¢630 before slowly climbing back to ¢570 by the end of August 2019. 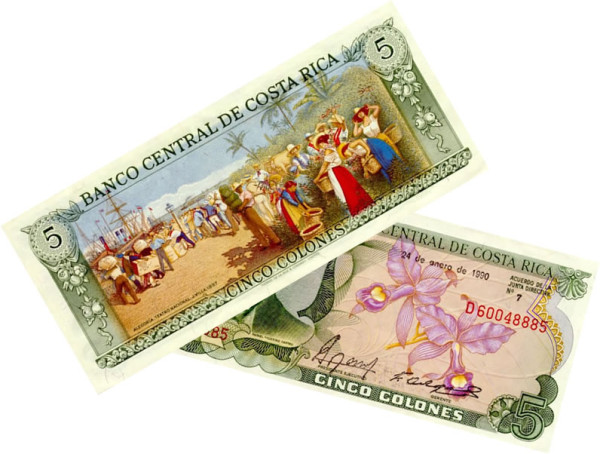 The 5 colón note bears a beautiful mural depicting coffee harvesting and exporting on one face and the national flower of Costa Rica on the other. This denomination would only be worth about one cent and is no longer in circulation. However, you can still see the mural if you visit the National Theater.

Many prices for tourists are posted in US dollars.