There are a number of things that travelers incorrectly assume are going to be free.  An unexpected $50 – $100 expense or two can mess with your plans so read on and budget accordingly.

It’s easy to understand where people from the U.S. get the notion that hiking, mountain biking and horseback riding are free activities.  There are approximately 1,000 miles of free city, state park, national park and forest trails within an hour or so of our home in northern Colorado.  Even at the premium parks in the U.S. the fees are nearly negligible.  A carload of six people pays just over $3 each for a day at Rocky Mountain National park or $5 each for a one week pass.

Nearly all trails easily accessible to tourists in Costa Rica include a significant entry fee and/or paid guide requirement.

At a Costa Rican National park a family of six will spend between $72 and $108 in entry fees for one day and for a week it would be over $500.  Private wildlife reserves like Monteverde charge around $20 per person per day for entry and if the hiking trails include improvements like suspension bridges it can be as much as $45 each.  Other national parks like Corcovado also require all visitors to be accompanied by a professional guide.

The short length of most trails and trail systems is another surprise awaiting hikers.  In the Colorado example above there are over 570 kilometers of trails at Rocky Mountain park.  Most Costa Rican parks have a couple of trails of 1 to 4 km in length open to the public.  Even ones like Corcovado and Chirripó that have gained fame as trekking destinations have under 50 km.

We certainly don’t begrudge the people who create and maintain the private trails or the government of Costa Rica recovering their costs and making a profit on the public ones.  It’s just something travelers need to be aware of and budget for.

The one place you can walk freely in Costa Rica is along the beach outside the national parks.  All coastline is public property and there are dozens of places where you can walk 20 kilometers along the beach before cliffs or large rivers force you to retreat.  The Free Things to Do page suggests a couple of other walks you might want to try.

We’ve done quite a bit of camping in Costa Rica over the past 25 years but not nearly as much as we planned at first.

Camping is prohibited in the places and at the times it would be really appealing.  The extreme fire danger from Guanacaste all the way to Chirripó in the southern Talamanca mountains during the dry season means an embargo on pitching tents in the best places at the best time of year.

We envisioned treks to amazing free backcountry camping sites helping to stretch our tiny budget.  That doesn’t work either.  Backcountry camping isn’t allowed for reasons ranging from the damage done just setting up camp in a wet muddy environment, to preventing poaching or protecting sensitive scientific field experiments set up in some of the biological reserves.  Generally you can’t do it and where you can it’s pricey because of the guides and permits required.

We have done some backpacking and camping at remote sites in the Indian reservations.  There’s no charge for camping but you’re not permitted to enter indigenous lands without hiring a baquiano – a native guide.

It also turns out it can be kinda hot, humid, buggy and miserable to camp in Costa Rica and the few designated campgrounds that exist cost more than a cabina.

Another budget buster popped up a few years ago.  We used to bring a duffel bag of camping gear along on every trip and store it with friends even though we knew we’d only be camping for five nights out of five weeks. Now the airlines stick you with a $100-$150 round trip baggage fee to haul your tents, bags, stove and other paraphernalia and that’s expensive if you’re only using it for a couple of nights.

There are some beaches outside the national parks that you can reach by 4WD and pitch a tent.  There are no facilities so bring sufficient drinking water and your own toilet.

In practice anywhere there’s even a wide spot in the road where anyone could conceivably want to stop for any reason there will be an orange vested “parking attendant.” 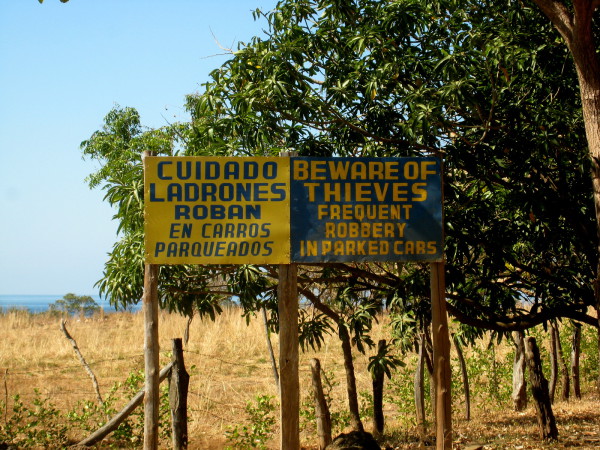 It’s traditional to pay for their vigilancia – keeping an eye on the parked vehicle.  The “attendants” are nearly never official (the vests are sold at WalMart), and you’re under no obligation, but rumor is that if you get a reputation for not paying they’ll call their friends the ladrones who break into your car while the attendant acts as a lookout.

I prefer to give them the benefit of the doubt and assume they’re providing a valid service.  I always try to make sure I have ¢500-¢1,000 handy because they probably can’t break a $20.

It’s traditional to pay when you depart.  They’ll usually help you pull out of your space, watching for traffic and making sure you don’t back into a tree or ditch.  When you’re ready to head down the road hold the payment out the window.

When you arrive catch the attendants attention, point at the corner of your eye then point at the car and smile.  You can also say “Ojo…gracias” if they’re close enough to hear.   This exchange means “I know how the system works and I’m in.  Keep an eye on the car and I’ll give you a buck when I get back.”

If you pay in advance you may find a different attendant on duty when you return and they’ll think you’re stiffing them.  Alternatively you can pay twice…it’s only a buck.

In the cities (anywhere within 30 minutes of San José) we strongly recommend using paid secure parking and even then don’t leave anything of value in the vehicle.

The “All” at “All Inclusives”

Obviously nothing at an all inclusive is free, you simply pay in advance, but once you pay you expect food, drink and fun to be included.  Some of that is included but never “all.”

Most travelers familiar with the concept realize that things like top shelf liquor, premium beer, non-buffet premier restaurants, jet-skis, ATVs and other motor tours are not part of “all” and cost extra.  Although it would be more accurate “Some Inclusive” just doesn’t have the same cachet.

In fact one thing that is free in nearly every hotel, lodge, restaurant, bar and coffee shop in Costa Rica is oddly not included in resort packages – wifi access may cost anywhere from $5 – $10 a day extra.

There’s another aspect that can get extremely expensive in Costa Rica.  If you just want to hang out at the beach an All Inclusive can be great.  However, they almost never include “off resort” tours and most people who visit Costa Rica are interested in volcanoes, hot springs, waterfalls, rain forests, wetlands and other ecological tours.

Every credit card transaction costs the merchant between 2.9% and 5% to process and most places the merchant absorbs that fee and just raises prices overall to account for it.  In Costa Rica it’s relatively common to add the fee to the cost of the item being purchased. You may see either “5% discount for cash” or “5% convenience fee for Credit Cards.”

Many credit card issuing banks also add an international transaction fee of between 2% and 3.5% plus a margin on the currency conversion.  So a $100 rafting trip may show up on your credit card statement as $109.50.  The rafting company will receive $100 or less and the rest goes to the financial institutions.

Don’t get upset with the Costa Rican merchant over these fees.  They are charged and collected by your credit card company and in the case of the international transaction fee the merchant does not even have access to information about whether your company will charge you or not.  Check the fine print on your cardmember agreement or call the toll free customer service number on the back of your card.

Check out our article on how to get, carry and spend money in Costa Rica for some tips on free payment methods.