Tipping was not the cultural norm in Costa Rica until it was introduced from the U.S. in the ’80s.

What About the Service Tax Included in the Bill?

When you go to your automobile mechanic you receive an itemized bill for parts and labor.  Similarly when you go to a restaurant in Costa Rica a “service tax” of 10% is added but it’s not dependent on the quality of the service and is not a tip.

Tipping is Not Customary in Costa Rica?

Statements like “tipping is culturally inappropriate in Costa Rica” or “Ticos are proud, don’t offend them by tipping” usually come from insiders trying to demonstrate how culturally aware they are or attempting to assuage their guilt over stiffing the waitress.  As noted above it might have been true 30 or 40 years ago but not now.

With a minimum wage around $US2 an hour but the cost of groceries the same as up north and things like electricity, gas, vehicles and appliances twice as expensive, tips are not only not offensive, they are greatly appreciated.

In the past 20 years or so gratuities have become a normal and expected part of the income for anyone employed in the service sector of the tourism industry.  Envelopes for housekeeping gratuities have appeared on nightstands at many hotels and tip jars are next to the cash register at fast food places and ice cream shops.

How Much to Tip? 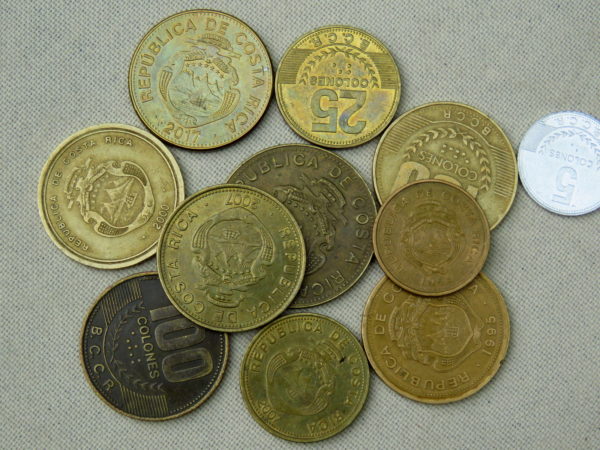 If your guide, instructor, driver or service staff made your stay particularly enjoyable consider giving them a gratuity.

Many activities will have a tip jar or box.  Otherwise you can hand the tip to the guide/driver/instructor and if you are assisted by multiple guides they’re good about splitting it up.

It would be wonderful if we lived in a world where everyone received a living wage for a day’s work but we don’t. We’ve actually seen little messages at hotels that more or less say “We don’t pay our staff a living wage so if you don’t want them to starve please give a generous tip.”  It’s a bit of a conundrum because my gut response is “how incredibly offensive, I’m not leaving a cent,” but then of course that’s just punishing the worker who doesn’t set the policy anyway.

The best way I’ve found to deal with it is simply decide ahead of time what to do (based roughly on the list above) and not give it any further thought unless someone goes out of their way and deserves even more.