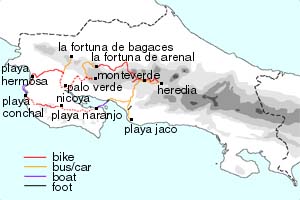 Our second trip to Costa Rica involved more cycling than the first. Some of the highlights were getting stranded in El Salvador… twice, Monteverde Cloud forest reserve, Playa Hermosa, the fishing boat rescue when we got lost on the monkey trail, and Palo Verde National Park.

This trip started with an unexpected detour to El Salvador. Although our tickets didn’t mention it, there was a scheduled stopover in San Salvador. The real surprise was that we were still there three days later. The 767 that we were traveling in blew a tire while landing, and the tire store in San Salvador doesn’t carry that size.

Within an hour of landing the airline figured out that they wouldn’t be able to get a new tire until a flight came in the next morning from Mexico City. They gave us the option of waiting to see if we could get on a late-night flight on another airline, or a night in a hotel in the capitol. Since we had several weeks to travel, we decided to check out San Salvador.