The ride from Nicoya to Playa Naranjo was long, relatively flat and sun baked. When it seemed we might never see shade again, we spotted a cluster of trees in the distance where a small stream crossed the road. We pulled in to the shade and dropped our bikes to fuel up on snacks and water, and were treated to a show as a band of howler monkeys crossed the road by way of the interlinked canopy overhead. 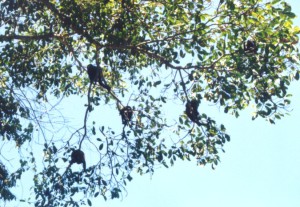 There were several large males in the group, and each one took his turn demonstrating his displeasure at our presence in his shady spot. Hooting and thrashing branches they danced above our heads until we decided to hit the road again in favor of finding a hotel with a swimming pool as soon as possible.

In Playa Naranjo, we stayed at Hotel Oasis del Pacifico as we always do when we are in town. Sue got me an early Christmas present, a day deep sea fishing on one of the charters run out of the hotel. The sail fish were nowhere to be found, but we had fresh tuna for dinner. That turned out to be a little unfortunate, as Sue had come down with the flu or some other stomach attacking virus. It didn’t help that we were scheduled to meet Joe and his brother at the ferry landing in Puntarenas the next day, and we had no way to contact them to let them know that Sue was in no condition for a ferry boat ride. She didn’t want them to worry, so she wobbled onto the boat and spent most of the crossing in the bathroom.